How brands interpret the meaning of freedom this Independence Day

From nostalgia to social causes to upholding the spirit of independence, brands are trying to put across various messages to Indians on their social media channels

As India celebrates its 73rd Independence Day on August 15, brands are all geared up to be a part of this pride and trying to reach out to their audience with patriotic and social cause-based campaigns. The themes range from celebrating the patriotic fervour among Indians to finding out the real meaning of freedom to honouring Indian soldiers who died fighting for the British during World War I.

BestMediaInfo.com compiles a few of such Independence Day campaigns that have made an impact.

BookMyShow’s charity initiative, BookASmile, expresses its gratitude to the Indian Army by pledging to contribute towards their welfare as well for victims of flood-hit regions in India, this Independence Day.

The ‘Power of One’ campaign captures similarities between the Indian Army and school-going children, both paying their respects to the Indian flag, and shows the former’s rescue efforts during natural calamities. The video, invoking a strong sense of patriotism, features young kids from Delhi-based NGO Manzil Mystics singing the national anthem in unison. Supported by BookASmile, Manzil Mystics' music programme ‘Learning Through Music’ reaches over 1,000 beneficiaries across 15 municipal schools.

For every view, like or share that the video garners across platforms, BookMyShow’s charity initiative will donate ₹1 each on behalf of the viewers for both the welfare of the men and women in uniforms and for flood relief. This initiative is a tribute to the bravehearts of the nation, who guard our frontiers and let India sleep peacefully.

Launching a digital campaign, the brand highlighted the meaning of “freedom”, which is the right to choose without fear of judgement, discrimination or ridicule.

The film aims at portraying the true meaning of the word ‘Azaadi’, conceptualised by Sugar’s in-house creative agency and directed by Circus Elephants.

#JustLetMeBe talks about a very relevant and concerning topic in today’s day and age about accepting yourself and also respecting each one's personal space, choices and actions.

The brand is promoting their #JustLetMeBe campaign through their YouTube, Instagram, FaceBook and TikTok pages as well as radio channels such as Fever FM (Bangalore) and Ishq FM (Mumbai).

Conceptualised and executed by the 22feet Tribal Worldwide, the ‘Truly Indian Burger’ campaign explains how McDonald’s burgers are an amalgamation of the best agricultural produce from across India.

Led by three 15-seconder digital films, the campaign is supported by an interactive microsite (best experienced on mobile handsets), which tells the sourcing stories of key ingredients of McDonald’s food products in an engaging way. People visiting restaurants can simply scan the QR Code on the tray-mat to know the sourcing story of their favourite burger. The campaign has cumulatively reached over 1 million people.

Through the campaign, the brand spreads the message to society that ‘Liberty should not be confused with freedom’. A rash act that harms others in any degree or manner is an abuse of liberty and no one should do it. The campaign encourages people to keep track of the duties towards the society and country at large.

Conceptualised and produced by Liberty Shoes, this powerful film has been executed by the in-house team of Flamingo Digital Pvt. Ltd., based in Gurugram, Haryana.

Lava Mobiles and Dentsu Webchutney, the creatively-led digital agency from the house of Dentsu Aegis Network, launched an initiative to bring our heroes back home. Aptly called ‘The Homecoming Project’, the initiative re-imagines India Gate and places the name of all 74,187 martyrs on it. This is achieved through an AR app that comes in-built with limited edition Lava Mobiles.

India Gate is one of the most iconic structures in India, but not many would know that it was built by the British to commemorate Indian soldiers who laid down their lives during the First World War. India Gate carries the names of 13,000 Indian soldiers and pays a tribute to their selfless valour. However, it is worth mentioning that the actual number of Indian martyrs during World War 1 stands at 74,187.

The British commemorated the contribution of every single Indian soldier. But most of these memorials are outside India in countries such as Iran, France and Germany to name a few. These memorials carry names of our brave heroes who never returned home.

The Homecoming Project app also allows people to search for names and points them to the accurate placement of the names on India Gate.

A hyperlocal service provider, Ease your life, launched its digital campaign #Salute Everyday Officials. The campaign combined the Raksha Bandhan and Independence Day celebrations together. The digital video encourages people to go out and tie rakhis to everyday 'rakhshaks’ who serve the nation.

The campaign is a reflection of a strong nation that excels on multiple fronts. It carries on with the theme of ‘Desh ki mitti’ while making it more contextual. The campaign is being launched just before Independence Day on TV, outdoor, digital and print medium.

Likee, the global short video creation platform from Singapore-based Bigo Technology, launched 'No matter where I am #IamIndian' campaign to resonate the patriotic sentiments surrounding Independence Day. The brand has looped in international sports sensation Hima Das to launch the campaign.

The campaign will see Indian users creating high-energy videos/duet videos while waving the Indian Flag. Likee has also introduced new effects and stickers that users can add to their videos. With this campaign, Likee expects to hit The Guinness World Record with the most number of people waving flags virtually to express their love for the country. 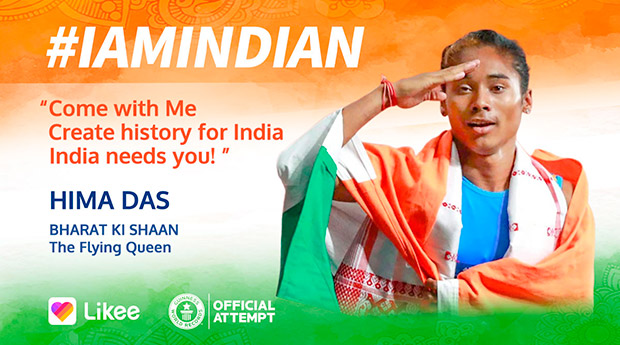 With this ad, Okinawa upholds the need to fight corruption in India and conveys how everyone has the power to change the society. It intends to present a bigger picture that how it is important to change the old perceptions and mindsets today, if people want to see a wiser tomorrow.

The video ad begins with a couple breaking the traffic signal on a scooter when they are suddenly stopped by the traffic police. In order to get away with the offence, the couple tries to bribe the policeman. The policeman is not very happy with the amount presented and asks them “Itne mein kya hoga?” The couple pays him more. However, instead of accepting the money as a bribe, the policeman walks away to buy helmets for both of them to explain the importance of road safety while riding and returns the rest of the money.

Zee Keralam launched a brand film reflecting the channel’s tagline — Let’s Weave Wonders in Life. The video subtly features the aspirations and dreams of a young girl as she draws inspiration from the team that recently launched Chandrayaan 2, a team that comprised many women leads.

The film also brings back the memory of former President APJ Abdul Kalam and his inspiring quote ‘Dream High’.