Biraha is a popular form of singing in UP, Bihar and Purvaanchal and the channel plans to leverage this means of expression through a show that gives singers a platform to go out there and make their mark 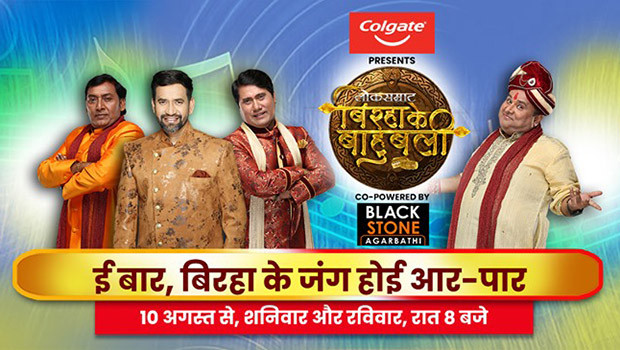 Big Ganga has launched ‘Lok Samrat- Biraha ke Bahubali’, a non-fiction music reality show. The folk battle will witness participation from the Biraha legends from UP and Bihar who will battle it out for the title, ‘Biraha ke Bahubali’. The show is being hosted by Dinesh Lal Yadav along with co-host and comedian Manoj Tiger and is being judged by Biraha Samraat Om Prakash Lal Yadav along with Vijay Lal Yadav. The one-hour show is being telecast from August 10, every Saturday and Sunday, from 8pm to 9pm on Big Ganga.

16 super talented singers will be selected from Uttar Pradesh, Bihar for the battle and only one will win the grand title. As Biraha depicts the story in a musical format, each performance would be a mini story in itself. The contestants will be judged on the basis of audience engagement and an impressive portrayal of a story. Biraha is one of the most popular forms of singing in UP, Bihar and Purvaanchal belt and the show plans to leverage this means of expression and give singers a platform to go out there and make their mark.

Amarpreet Singh Saini, Business Head, Big Ganga, said, “Biraha is one of the most popular forms of music in the region. With this offering, we aim to provide a platform to all these singers to showcase this form of music. We roped in some of the biggest names of the industry in this show to provide the much-deserved entertainment to our viewers. Shows focusing on the folk culture in the region have received an amazing response in the past and with this show we look forward to creating history. I hope that it will be liked, viewed and cherished by all.”

In the show, the audience will see some celebrated Biraha singers with a high fan base in the region participating in the competition. ‘Lok Samrat- Biraha ke Bahubali’ is first-of-its-kind show in Biraha which is making its way on TV screens. With the channel being a prominent entity on Free Dish and other distribution networks (Airtel, D2H, Tata Sky, Dish TV), this quartet of offerings will cater to the growing demographic of the Bhojpuri-speaking audience in the region.