In-depth: As business falls, is it time for print media to reinvent itself?

Quite a few industry veterans say the industry has to find newer ways to generate revenue while others feel the industry has a long way to go. Some say combining digital and print revenue is the way ahead. BestMediaIndia.info.com finds out 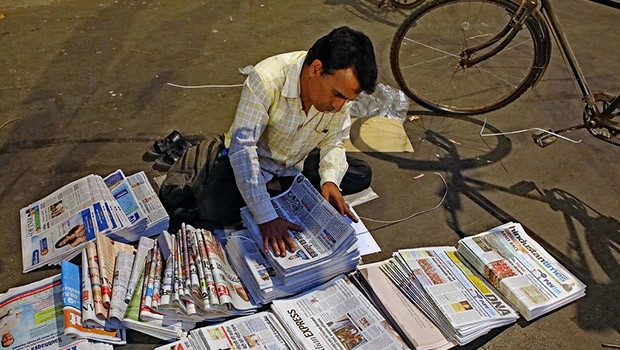 How long will we blame the poor consumption economy, tepid Sensex mid-cap market, DeMo, GST, RERA, NP Customs Duty & Force-majeure ???? for the fundamentally challenged valuations of #PrintMedia in India ? & these are just the listed ones ! #ReinventNow #Transform #sustainability pic.twitter.com/KizhRPyd9H

This has led to a debate on the micro-blogging site with comments and reactions pouring in from all quarters. Veteran adman and brand strategist Ambi Parameswaran suggested ‘print’ should learn from Google and Facebook on how to build value and hype. Partho Dasgupta, Chief Executive Officer, BARC India, tweeted, “Print will survive and grow only if it manages to measure and sell print and digital advertising together.”

@PradeepDwivedi Print should learn from Google and Facebook on how to build value and hype. If the industry does not get together to sell the bigger cause, this will be a permanent feature. https://t.co/vgeyXDO1so

While most of the TV news channels performed well in Q1, taking a major portion of the media pie during the biggest and most-hyped General Elections, newspapers failed to fare well. So, what actually worked against the newspapers?

According to Dwivedi, a combination of factors led to such a situation. “With the clear polarisation of expected election outcomes, neither the incumbent ruling party nor the opposition splurged on the print medium. A lot of politicians leveraged print via content rather than ads. In fact, the PM gave a detailed interview to a select set of newspapers across the country, thereby gaining access to audiences for his party’s message. On top of that, most parties increased the spends on digital and social media to impress the increasingly smartphone-savvy population,” he says.

So, while there was some salience for print, this was a point of inflexion election where the spends actually took a beating.

Ashish Bhasin, Dentsu Aegis Network Chairman and CEO South Asia, however, has a different opinion and says that print media in India is still growing. According to him, the financial results may vary from quarter to quarter because of newsprint prices, advertising revenue, and other factors. “Overall if you see, we are the only country in the world where print media is still growing. Of course, the growth of English newspapers is very slow. But regional newspapers are growing much faster,” Bhasin says.

Difference of opinion may ‘and will’ stay. But the print publishing business model must find a way to weave audience and content alignment between the print and digital publications seamlessly, and the metrics to monetise it. Cross-media measurement is one way to go, provided we can have consensus on same. Their ability to integrate experiential value through large on-ground audience connect programmes can give them the fuel to reaffirm the relevance of print and extract value of same. At the same time, their cost models needs complete overhaul.

“Most of the digital platforms today use content from both print and television. Hence, it makes sense to measure and sell print and digital advertising together,” says Dasgupta.

So, in a country like India, for print to sustain and grow, we need to develop our own unique business model to support it wherein content from print and digital publications blend seamlessly and we have the right industry metrics to monetise it.

And how can media planning and buying agencies act as a catalyst?

As partners to a client’s planning and investment process, the agencies have a significant role to play. They have to take a lead in seeking value of access afforded by print publications beyond the OTS (Opportunity To See) and Frequency metrics but impact parameters that count for changing preferences of audiences, sustainably.

“Every media house gets feedback from the media agencies. In case a product is not attractive, then it’s not going to get ads. In the end, content has to be good since consumers have to read. It’s one of the principles of advertising that has remained unchanged – because advertising follows the eyeballs,” says Bhasin.

Tags: In-depth As business falls is it time for print media to reinvent itself?
Advertisment
More from this section