During the LGBTQ pride month, brands made efforts to show their support to the community through campaigns and messages. But were these just tokenism or were brands actually trying to give a fair representation to the community? Bestmediainfo.com finds out 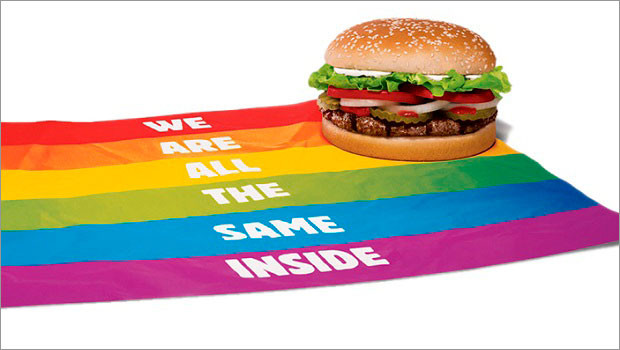 June was celebrated as LGBTQ pride month across the globe. The community was seen marking the month across cities through parades, events, messages, campaigns, etc. Brands also used the opportunity to engage with the LGBTQ community and showcase their support in order to give them a fair representation.

For instance, food aggregator Zomato donned the gay pride colours on Twitter, saying: “Let's get one thing straight. Love is Love”. Netflix launched a new LGBTQ+ focused campaign: Prism, whose goal is to present a “spectrum of LGBTQ+ stories”.

Uber India went a step ahead and incorporated the rainbow colours symbolic of gay pride not only in its logo but also in its route map. The accompanying text said: “#MoveForward, ride with #Pride!” Britannia’s Good Day cookies came out with a creative where the ridges of the biscuit were splashed with rainbow colours.

Other brands such as IndiGo, HBO, Nykaa, L'Oreal, Discovery Networks, Swiggy, Ola, KFC, Star TV, Zee TV, Colors, GoAir and Titan Eyeplus were also quick to get into the mood of the month.

But is just rolling of rainbow creatives, waving a rainbow flag during the season or representing a gay couple in a brand’s TVC campaign or showing up only during an occasion enough? Is it just a superficial show of support by brands or are they serious?

BestMediaInfo.com speaks to industry experts to understand whether such moves are tokenism or real awareness to support the mainstream acceptance of the LGBTQ community. Speaking on the campaigns by brands during pride season, Samit Sinha, Founder and Managing Partner, Alchemist Brand Consulting, said, “I think brands have taken a very welcoming step to be inclusive in their marketing. The entire issue about sexual preferences tends to be a little polarising. There are some people who are conservative and find it difficult to accept this kind of sexual orientation as part of mainstream. But definitely, now there is a growing support; even a large section of the non-LGBTQ community sees this move as progressive and whole-heartedly endorses it. These brands have done a favour to the LGBTQ community and acknowledged their existence. Brands are also being able to portray themselves as progressive. Consumers of all communities support such progressive thoughts of brands, which create goodwill. I think brands managed to get the pride month right.”

Kalyan Kumar, Co-founder and CEO, Social Catalyzers, said, “A lot of things still need to be done by brands to connect with viewers; a long way to go in certain geographical areas where it’s not yet 'accepted'. Brands have to play safe among their audiences but the trend is in the right direction in terms of awareness about LGBTQ.”

Jagdeep Kapoor, Samsika Marketing Consultants, said, “Although awareness about the community has started increasing, much more needs to be done and it has to be done sensitively. The campaigns that consider them to be a part of life are good. Such campaigns help them to get faster acceptance and go mainstream. The campaigns that consider LGBTQ to be apart from life are the ones that will not bring justice to the community. Many campaigns on various issues have happened over the 40 years for social acceptance. I see a number of serials and films happening to enhance awareness about LGBTQ.”

Harish Bijoor, Brand strategist, consultant and Keynote speaker, said, “Brands attempted to look inclusive. In the bargain, many fell on their faces. The LGBTQ rainbow alone does not make a brand inclusive. There is much more to be done. Brands are still scraping the tip of the iceberg of options here. Brand managers themselves need to come out of the closet and embrace acceptance of inclusiveness. If that belief is firm, good creative efforts will happen. This in many ways is the first year of this attempt. Let’s give it time and not be too judgmental on this for now.”

Are brand campaigns during pride month tokenism or not?

According to Kumar, “Brands are mostly about topics that have a leadership taking a stand, measurably. I wouldn’t be so quick to judge the brands, they have a lot on their shoulders, and simply put, it’s just great to see the right trend for the right cause coming up,” he said.

Likewise, Samit, said, “Can’t comment whether it was a tokenism by brands or they really wanted to bring a change. But whatever it was, it did bring the change, the end results of the campaigns were positive.”

However, Kapoor and Bijoor agreed that campaigns are a part of brand tokenism.

Kapoor said, “I think it’s just tokenism. If it is a campaign, it should keep going at least for six months or a year. It should just not happen over the point of time but over a period of time.”

“As of now, this is still tokenism. It is still ticking a box of acceptance, but even that is a large step for now,” Bijoor added.

According to Kapoor, brand campaigns that conclude as a part of life will raise awareness and develop acceptance towards LGBTQ. “Brands should focus on making campaigns that relate to the life of a consumer and not just about the occasion,” he emphasised. “It’s an evolutionary phase where acceptance and awareness is growing and I am sure it will surely reach mainstream,” he adds.

Kumar said campaigns on LGBTQ pride were quite required to start a positive talk about the community. “When brands get involved, they have the power to enable a new thinking,” he said.

Sinha, elaborating on the current requirement of the community, said, “The important cause of the LGBTQ community is to have mainstream social acceptance and by acknowledging and addressing them in brand campaigns; the brands are definitely giving social legitimacy to the community,” Sinha said.

Brands could have done more

According to Kumar, many brands supporting the LGBTQ community are in the niche and premium categories where 'apparent' acceptance among consumers is higher and can be pushed further.

Bijoor differs, “The masses are still far away from accepting the LGBT community as yet. Therefore, brands need to make efforts that are mass-oriented rather than niche-oriented. Brands need to move away from their big city and glitzy bar and pub orientations and enter the homes of small town and rural India with its messaging,” he said.

Kapoor notes that a number of brands used aspects related to the members of the community, which others should also follow.

Speaking on the effect of campaigns on community and brands, Kumar said, “The community will always resonate with such communication. However, it’s about dealing with three aspects of promoters, passives and detractors, and this is where it gets tricky in terms of data. Will you alienate more or inculcate more brand love? I think the 'passives' are the biggest community in developed countries and not so much yet, in the developing ones, stereotypically. So it’s varying degrees across the spectrum of 'awareness' and that’s for a brand to judge and play. Thus measured bravado is a good idea, given those brands a lot to lose, and a certain amount to win.”

According to Sinha, such campaigns make brands progressive and it certainly make the LGBTQ community feel accepted by the society. “It’s true that not every person from the community would feel great seeing the pride campaign or the campaigns featuring LGBT couples but it has to begin from somewhere. The topicality of the occasion gives brands an opportunity to talk about it. None of these brands have particularly targeted the LGBTQ community; they have targeted their entire TG. Brands through such campaigns present themselves as progressive to consumers, therefore adding dimensions to that image,” he emphasised.

“The brands through such campaigns highlight themselves as inclusive brands, which cater to everyone, hence get a positive response from consumers. Being sensitive, respecting personal choices makes a brand inclusive,” concluded Kapoor.