63% of consumer durable sales in India will be digitally influenced by 2023: BCG, Google Report

Approximately 80% of digitally influenced consumers today decide their brand after researching online, and companies will need to win these consumers to stay relevant 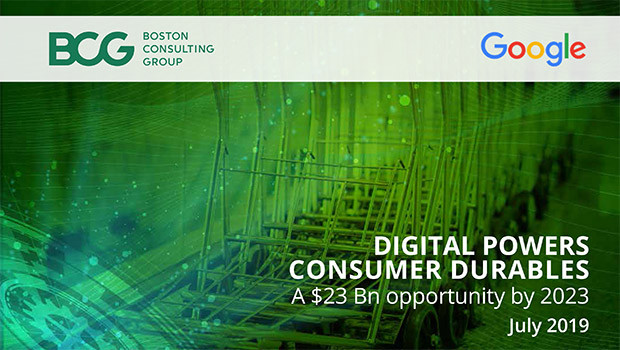 Today, 28% of consumer durable sales in India is digitally influenced and this is estimated to reach 63% of total sales, amounting to $23Bn by 2023. $10Bn of this will be online sale, according to Boston Consulting Group (BCG) and Google India report titled ‘Digital Powers Consumer Durables: A $23 billion opportunity by 2023’. The report defines a sale as a ‘digitally influenced sale’ if the buyer uses internet during any stage of purchase cycle.

Decoding the digital consumer further, the report also highlights important consumer insights as buyers traverse through multiple online and offline touchpoints before making the final purchase. In the pre-purchase phase, approximately 80% of digitally influenced consumers are undecided about their choice of brand when they start their research and spend typically 2-3 weeks on research before making the final purchase. Search, social media, blogs and online videos are the key sources for online research. The report suggests that nearly 2 out of 3 digitally influenced consumers rate online reviews as a significant influencer in their purchase decisions.

Speaking about the key insights, Nimisha Jain, Managing Director & Partner, The Boston Consulting Group, India, said, “18Bn of consumer durable sales will reside with digitally influenced consumers who are undecided on their brands in 2023. Companies will have a short 2-3 week window to influence them and ability to timely & efficiently influence them will determine the winners of the future. "

The report further said, during the purchase phase, low price, convenience and choice of multiple payment options are some of the largest drivers of online conversions. However, absence of in-person guidance and lack of ‘touch & feel’ are the biggest barriers. In the post-purchase phase, the report interestingly calls out that nearly 1 out of every 3 online buyers provides product reviews online post purchase and both, in-store digitally influenced buyers and online buyers look for other offerings from the same brand after completing the purchase.

Calling specific actionable insights for the consumer durables players to seize this opportunity, Vikas Agnihotri, Country Director - Sales, Google India said, “Consumers are creatures of habit, and with growing access and connectivity, we are seeing consumers research online before they arrive at their purchase decisions for almost everything. And while businesses have started to build their digital presence, there is a need to take a holistic approach to digital as the scale of its influence has grown rapidly going well beyond top metros. Businesses need to create an always on digital strategy and create personalised interventions to tap different consumer demographics across all markets to achieve their business goals.”

The findings in this report are based on extensive quantitative survey of 6800 consumer durable buyers and qualitative discussions conducted by Kantar IMRB for the BCG-Google Digital Influence on Consumer Durables Study 2019. Insights from these researches were then combined with BCG’s proprietary models as well as BCG’s industry intelligence.