Industry leaders discuss the balance of revenue generated from the advertising and subscription gateway at Kyoorius Melt. The panel also discussed the relevance of newspaper in today’s time 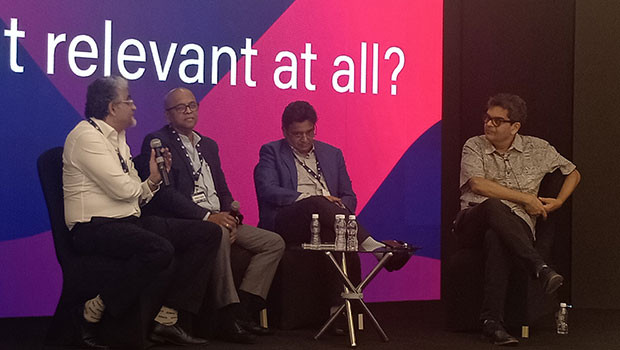 Over the years newspapers have stayed away from increasing the subscription prices and have relied heavily on advertising revenue.

It was about time that the reliance on ad revenue was reduced, opined leaders from India's print industry at Kyoorius Melt.

In a panel including Sanjeev Bhargava, Brand Director, TOI, Suresh Balakrishna, Chief Revenue Officer, The Hindu Group, and Varghese Chandy, VP, Malayala Manorama speaking at Kyoorius Melt, a two-day conference in its fifth edition discussed on the revenue newspapers generate is largely from subscription or from advertorials.

“At one end, we look at the business side of the enterprise, on the other side, the ethics of the publication. I think the formula applied by Bennett years ago was that our editorial part will completely be diversed from the commercial part, and that’s what we implied since then. The only way that the revenue team can connect to editorial is through brands, we maintain the sanctity of the content through this firewall,” said Bhargava.

“We protect the integrity of our content and at the same time, if there is a commercial possibility that needs to be exploited, it is something that we do very carefully. For us, this model works beautifully, and I think it delivers to both reader and advertiser,” he added.

“As a newspaper, Malayala Manorama leaves the decision of ad placement on our editors, because they know our readers well than I do. What is important to the reader is decided by them. Because giving complete value to what a reader has subscribed for is the first thing first,” said Chandy.

“For Hindu both the gateway works equally. We are the costliest selling English newspaper at Rs 10 on weekdays and Rs 15 on weekends and also the first one to go digitally behind the paywall in this industry. There is a 50-50% ratio of revenue generated from ads and subscription in our publication,” said Balakrishna.

Speaking on the print’s relevance, Bhargava, said, “A medium is relevant if it is offering a content which provokes a new thinking, a new relationship, a new perspective and opinion. The fact is new perspective creates relevance for the reader and newspapers need to understand how to create relevance."

According to Bhargava, newspapers are no longer in the breaking news industry as it has taken up by television and digital media. “While other mediums are tripping over themselves to break the news, uniqueness of print is that it curates, validates and analyses the content before publishing,” he said.

However, Balakrishna of The Hindu said, “Relevance is the moving target, what’s relevant today will not be relevant tomorrow, and that’s true for every news medium. I think print is in the business of breaking accurate and verified news till today and that will never go away from newspapers.”

While newspapers are curating content and digital is tripping to break the news, is it possible to have both the sections be merged to create a good instance?

“It is something that the entire print is actively talking about, and some newspapers have tried it, which eventually didn’t turn out that successful. The one newsroom is about efficiency and not about what content is going out on which medium. There is more interactivity, a better understanding of what’s going out on the print and digital,” said, Bhargava.

“Talking about the digital piece, we have one newsroom, but the process even for our digital news section is the same. We break the news two hours later than anybody else because we want to verify the news before we break,” said, Balakrishna

Speaking on the digital news behind a paywall, Balakrishna, said, “We believe people will pay for good content. Since 2013, we are behind the paywall.

“Our e-newspaper is behind the paywall, and we have slowly started picking up. There is a difference between English readership and regional readership. 30% of our readership comes from the age group of 30-35, and that’s growing,” said Chandy.

Speaking on the demographic issue on newspaper consumption, Bhargava said, “Being the only national newspaper as per the footprints that we have, our priority is on national issues, and then we make sure that the coverage on the local level is good enough for the reader of that place to find the local connect.”