Partnering with ICC World Cup 2019, what’s in store for Uber?

Being the official sponsor of the ICC World Cup 2019, Uber had launched its campaign, This World Cup, Fans will Win’, last week. With the onset of the tournament, the anthem for the event, ‘Way-O, Way-O’, also went live 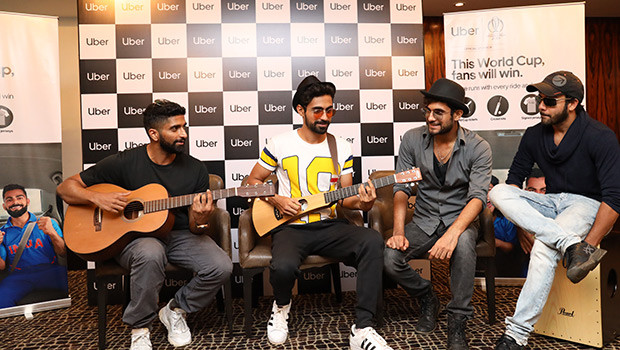 On the sidelines of the event, Uber also launched a campaign, ‘This World Cup, Fans will Win’, which aims to create a culture of togetherness and puts cricket lovers at the heart of the celebration.

As the cricket tournament kicked off on May 30, Uber went live with Way-O, Way-O, an anthem to energise fans and viewers of one of the world’s most anticipated sports tournaments. Way-O, Way-O, Uber’s signature anthem, exemplifies the excitement of cricket lovers by giving them one unified voice to spread cheer and bring fans closer together for the game they love. Uber aims to blend in fan love for the sport and affection for their favourite team to foster a spirit of solidarity at the event.

Both the campaign and the anthem have been put in place by Sonal Dabral, Chief Creative Officer, South and South East Asia and Vice-Chairman India of Ogilvy, working with the team at Ogilvy Delhi. The rhythmic anthem is a cultural blend of harmonies, written by Dabral and composed, produced and curated by Michael (Mikey) McCleary.

The song will be played on stadium screens during game breaks through the tournament. Uber’s Way-O Way-O ignites these passions to celebrate the Cricket World Cup and gives fans something to cheer along their favourite teams. What made Dabral think of an anthem like Way-O? What was the thought behind such lyrics? Speaking to BestMediaInfo.com, Dabral said, “Cricket World Cup is the biggest cricketing event in the world bringing together top teams from around the world with passionate fans celebrating this great game. This anthem is for the fans and I wrote it from their voice and their point of view. The lyrics of this anthem work on a few levels. It brings alive the spirit of fans from across the world coming together and celebrating the game and the glory it will bring to the winners.”

He added, “On another level, the lyrics also pay tribute to the players talking about the sacrifices they’ve made to reach this top stage of the game. It’s an anthem that goes beyond nations, boundaries and divisions. An attempt to unite all the fans of cricket into singing one tune and bringing them together and closer to celebrate the spirit of cricket.”

Why the words Way-O? What was Dabral trying to convey through these lines? “The hook line ‘We are on our Way-O’ is the voice of the fans from across the world on their way to celebrate this great cricketing event and nothing will stop them and their favourite players to reach the very top. Way-O Way-O is an addition to the line to make it catchy and easily hummable. The line ‘We are on our Way-O’ is also a nod to Uber’s philosophy of movement igniting progress and taking the world forward,” he clarified.

Why did Dabral choose such a mix of singing artists for the anthem? “This is a global campaign. It’s conceptualised in India but it’s an anthem for the world. For all the cricket-crazy nations of the world. The song is about everyone coming together, following the same path to worship cricket and celebrate its spirit. So we decided to bring the singers from around the world to sing and celebrate and become the fan’s voice. McCleary, who produced and composed the song, did an amazing job getting the right talent together,” said Dabral. Akash Bhatia has directed the music video.

Discussing the idea and strategy behind the campaign, ‘This World Cup, Fans will Win’, Dabral specified, “We have been conditioned to believe that progress is an individualistic journey. Uber challenges that and believes that in a connected world, progress is often achieved together. We captured this belief in a simple philosophy — when people who strive to move forward come together, the world moves forward. That’s why when it came to the World Cup, we wanted to celebrate the collective victory of the fans and the teams.”

“At the end of every match while a team wins the cup, players take accolades and the moolah. Fans are left with just the joy of seeing their team win. Uber believes fans do a lot of hard work to back their teams and they deserve to get a lot more for it. And that’s how we created the campaign ‘This World Cup, Fans will Win’. This is brought alive in all the ads featuring Virat Kohli and this same spirit was captured in the anthem, which is also an important role fans play in supporting their teams and in the process taking the game forward,” he added.

Kohli is Uber’s brand ambassador and the Indian cricket team’s Captain. “He has a very special role in our advertising campaign, which will positively impact our ICC Men’s World Cup 2019 partnership campaign. I think you will be excited to see the role Virat plays in our films,” said Manisha Lath Gupta, Head of Marketing, Uber India and South Asia.

What was the client brief for the campaign? “Uber is not just a technology company; it is an organisation that’s changing the world for the good by enabling billions of human connections. The Uber platform has become the synapse where one person’s ambition meets another’s. And together they move each other forward. Our brief was to tell this story and bring out this human side of Uber,” said Dabral.

What was the creative thought behind the campaign? Dabral shared that the campaign was meant for the fans. He took the example of slice-of-life situations set up in an Uber ride where the riders who are also die-hard cricket fans face a conflict brought about by the world cup and their passion for cricket. Kohli playing the driver in various avatars helps resolve the conflict by making a witty or inspiring comment. At that precise moment, the riders are rewarded by runs and the promo offer is introduced.

“A light-hearted way of getting into a cricket fan’s heart and helping him win. Must say after he retires, Virat can easily take up acting as his next pursuit. He is a natural,” chuckled Dabral.

The campaign is an integrated one, covering not just riders but also driver partners across all touch points. Apart from being run in India, it is being extended to England, Australia, South Africa, Pakistan and Bangladesh.

The basic idea behind the campaign and the films remained the same but the agency has added the local flavours, nuances and humour to make it more authentic and relevant to that particular country.  For instance, in Bangladesh, they have Shakib Al Hasan playing the role of the Uber driver partner who helps the fans in his car, win.

With the partnership of Uber with the ICC World Cup, what kind of an association is Uber looking at for the brand?

The ICC Men’s World Cup 2019 is one of the world’s most-watched sports events, with an estimated viewing audience of 1.5 billion passionate sports fans.

“Uber partnered with the Cricket World Cup 2019 to connect with consumers and deliver incredible experiences. Our first successful partnership with ICC for Women’s T20 World Cup was a huge success. At Uber, we are committed to moving people forward by removing barriers and bringing people closer together. We are excited to further our commitment to cricket as a sport and bring our community of riders, eaters, driver partners and delivery partners across the world, closer to the game they love,” replied Gupta.

How will Uber, as a brand, be able to encash upon this opportunity?  ‘Uber karo, World Cup chalo’ is a promising and very high engagement campaign. As a part of the campaign, Uber has planned some really exciting and creative elements/activations to keep its eaters, riders and partners engaged throughout the World Cup.

This demand generation campaign is for Uber’s consumers as well as partners that provide passionate fans (riders, eaters, driver and courier partners) a chance to win merchandise as well as a once-in-a-lifetime opportunity to win a trip to the World Cup and experience the thrill of a live game. It is a unified campaign across Uber Eats and Uber Rides wherein every trip you take on Uber, or every order with Eats you score runs, will keep totalling up to make you eligible to earn tickets to the World Cup.

Uber is running the same campaign for its driver and courier partners. The more trips they take, they stand a chance to go watch a World Cup match.

“For us, this is a very exciting campaign as we’re meeting both objectives of engaging the supply and demand side of the business,” pointed out Gupta.

With Uber’s participation in cricket events like last year's ICC Women's T20 World Cup and this year for the ICC World Cup, what is the path that the brand is trying to pave, especially with regard to cricket?

“With cricket and many other sporting events, people and communities come together at these sporting events. It moves people forward collectively, which perfectly fits Uber’s brand philosophy. We’re moving people forward on a daily basis and bringing them together. Thus, we feel that sports is a good brand fit for us,” said Gupta.

“Additionally, The ICC Men’s World Cup 2019 has a huge fan following that unites the world beyond geographical boundaries. Therefore, be it supporting women cricketers to encourage more women in sports or partnering with NFL to reduce drunk driving from the stadiums or staying relevant in pop culture by deploying fun and exciting campaigns, our mission at Uber is to move people forward by establishing a connect between the brand and our community of riders and partners,” she added.

Last year, in line with the company’s initiative to empower girls and women around the world, Uber supported the first-ever standalone ICC Women’s T20 World Cup in the West Indies. As a part of this partnership, Uber rolled out the #JerseyKnowsNoGender campaign in collaboration with sports personalities from different fields to encourage women’s participation in sports and to generate support for the T20 Championship.

The ICC World Cup 2019 tournament will run till July 14. The semi-finals will be played at Old Trafford in Manchester and Edgbaston in Birmingham on July 9 and 11, respectively, while Lord’s will host the final on July 14. 11 venues across England and Wales will be used. The 10 teams in the tournament will play against each other in a single-league format, with the top four sides after 45 matches to qualify for the two semi-finals.