According to BARC India data, 60% of all World Cup viewers tuned into the India-Pak match. 45% viewership of all India World Cup Matches was also from the India-Pakistan clash 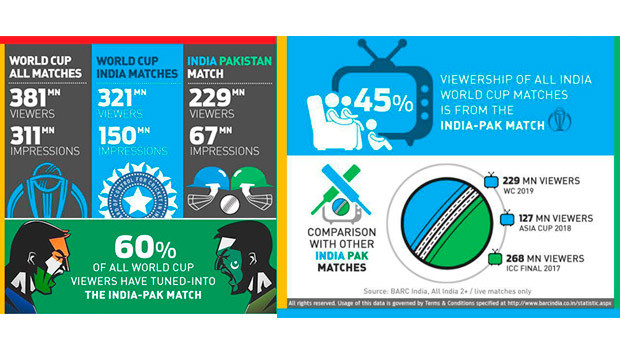 An India-Pakistan cricket clash has always managed to cause maximum impact and this time it wasn’t any different. Though frequent rain acted as a spoilsport, the Indo-Pak face-off  in the ICC World Cup 2019 recorded 229 million viewers (BARC India, All India 2+) tuning in to watch the live match coverage on Star Network and Doordarshan. The match registered 67 million impressions.

Barring DD viewership, Star India, an official broadcaster of ICC World Cup 2019, recorded a viewership of 206 million for the match. The tournament has seen 367 million viewers tuning into Star Network from across India with television viewership delivering a record 303 million average impressions for the first three weeks.

Among India-Pak matches played in other series, the clash of the ICC Final 2017 recorded 268 million viewers whereas the match played at Asia Cup 2019 registered 127 million viewership.

Star India’s digital platform Hotstar recorded 100 million active users and a concurrency of 15.6 million, the highest ever in an ODI match, during India-Pak match in the ongoing ICC Cricket World Cup 2019. The platform witnessed 66% reach from towns beyond the big metros.