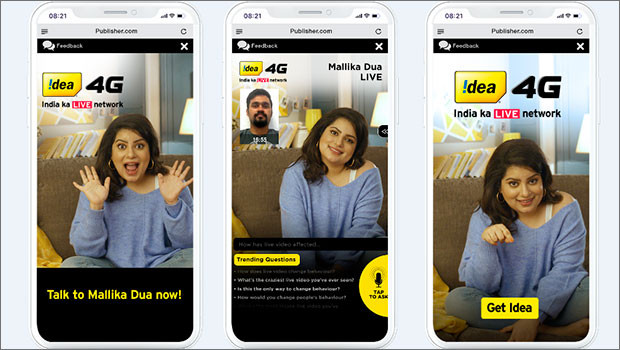 Mindshare, the full-service media agency which is part of GroupM, has launched an interactive campaign with comedian and social media influencer Mallika Dua as part of the Idea 4G #IndiaKaLiveNetwork initiative. It is an attempt to bring alive the experience of video calling with a celebrity in real time.

Building on the brand’s tagline of ‘India Ka Live Network’, Idea 4G Live leveraged the power of video calls in an attempt to create awareness about common misdoings of people and encourage them to change their behaviour.

Mindshare and Idea 4G unveiled a voice-enabled AI-led interactive video-chat bot ad campaign that enabled millions of users to interview Dua.  It was co-created by mCanvas, the experiential storytelling ad platform for small screens. The tool allows users to interact with Dua, and ask her questions ranging from personal trivia to the benefits of Idea 4G network and the power of live videos by simply tapping on the mic icon. Trending questions are also prompted at the bottom of the screen which the user can scroll through and ask Dua. The innovation is done through live media banners placed on popular websites, which can be accessed through mobile phone browsers.

The experience is designed to be seamless and resemble a live video call with the user's own face seen on the screen. This experience can last for as long as the user has questions to ask and also allows users to ‘Get Idea’ in just a few clicks.

The innovation uses Artificial Intelligence (AI) where the ad creative listens to user questions in English and Hindi and uses Machine Learning (ML) to analyse all the questions asked by previous users and increase accuracy of the responses. For example, if a user asks a question in Hinglish, the AI detects that it contains English and Hindi. Next, the ML helps accurately assign a relevant answer to that question.

The campaign is live on several media and news websites and has already seen engagement from over 7.2 million users. The campaign is witnessing about eight times higher than the average mobile-banner click-through rate. Interactions with this creative have also been found to last for an average of 22 seconds, with some users spending over 10 minutes.

Niraj Ruparel, National Head, Mobile, Mindshare India, said, “We at Mindshare always look forward to crafting innovative and effective solutions for brands. Idea, as a brand, does not shy away from taking an unconventional path when it comes to communication. With the video-chat bot ad, we have come together to create a first-of-its-kind innovation on an effective platform. By leveraging on Mallika Dua’s popularity, and Idea’s 4G network, we are hopeful of bringing about a change in people’s behaviour, and habits, as well as encourage more people to go Live to highlight societal issues.”

Sunita Bangard, President, Marketing, Vodafone Idea Ltd., said, “Over the years, brand Idea has built a strong reputation for creating purposeful, conscientious campaigns that encourage change for the betterment of society. The Idea 4G #IndiaKaLiveNetwork campaign highlighted the power of streaming live videos over Idea’s robust 4G network, thereby driving a positive change in behaviour among citizens. In its endeavour to engage with the digital natives, the brand Idea has always tried digital-first initiatives for our ATL campaigns, many of which have been appreciated and rewarded at various digital forums. Our innovative AI and ML aided campaign has set new benchmarks in digital advertising.”