Zee5 plans to launch 72 original shows in six languages in next one year to increase its active user base to 100 million. The company will continue with its freemium model where catch-up TV is available for free but the apps original content is behind the paywall. In an interview with BestMediaInfo.com, the business head of the OTT platform says the subscription revenue will overtake the AVOD model for Zee5 in the long run 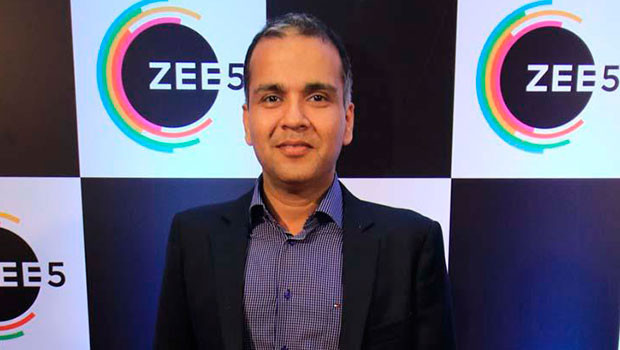 Zee5 is planning to strengthen its user base in the heavily cluttered Indian OTT market that will soon have two more international players – Apple TV and Disney+.

In an interview with BestMediaInfo.com, Manish Aggarwal, Business Head, Zee5 India, said that the platform was strengthening its portfolio by releasing around 72 original series across six languages by the end of March 2020.

Asked about its plan to market and distribute these originals, Aggarwal said, “For us, marketing differs from show to show and geography to geography. To an extent, the marketing spends is equivalent to the show budget. When it comes to marketing our budget is very sizeable and is dependent on the kind of content we are launching. What works for us is video advertising where we reach out to the consumer and get them to know more about our content.”

Zee5 is also ensuring that it reaches the maximum number of audiences through it partnerships with telcos. The OTT platform recently partnered with Reliance Jio Infocomm Ltd’s KaiOS feature phones. Through this partnership, Zee5 will have access to 40mn+ users of Jio feature phones in the country.

Talking about whether the viewers were moving from TV to OTT platforms, Aggarwal said, “I don’t think there’s any cannibalising happening. Both TV and OTT will continue to grow.

Following TRAI’s new tariff order, there are channel blackouts in several places. Do you think consumers will migrate to OTT?

I don't think people are migrating to the platform yet. With channel blackout etcetera, we have seen some movement on Zee5 for catch-up videos but there are different types of consumers who watch either TV channels or OTT platforms. So, I don't think cannibalising is happening yet.

I feel both OTT and television will continue to co-exist, even though TRAI’s guideline has created some kind of confusion in the minds of the consumer on which pack to select. Networks like us have initiated a full-blown marketing campaign from outdoor, television to digital, wherein they are educating consumers about the TRAI NTO. There are consumers who are coming to Zee5 for catch-up videos, on-demand content or subscription-led content behind the pay-wall.

If we look at OTT platforms like Amazon and Netflix, they are investing heavily in marketing to attract viewers. What is Zee5’s stand when it comes to marketing?

When it comes to marketing, our budget is very sizeable and is dependent on the kind of content we are launching. Like Uri and Simmba, for instance, they were two blockbusters of the year that we released in the same week. So, we wanted to make sure we had larger-than-life marketing, complete with 360-degree surround. We wanted to create awareness among consumers and fans who haven't seen Uri and Simmba in theatres as well as those who want to see again. We want them to know that the films are available on Zee5 and they can subscribe to see the movie.

How do you decide the budgets for marketing?

For us, marketing differs from show to show and geography to geography. To an extent, the marketing spend is equivalent to the show budget. If it’s a marquee property like Arjun Rampal’s The Final Call or Saqib Saleem’s Rangbaaz, then it gets the 360-degree marketing campaign. We also have shows targeted at a particular pop strata or a particular cohort like our docudrama on Lal Bahadur Shastri. Such shows require a different kind of marketing. Docudramas are targeted at audiences which would like to see such programmes.

We also keep doing geographical campaigns like the one we did for MS Subbalakshmi in Andhra Pradesh and Telangana.

What kind of marketing campaigns work well for Zee5?

In the end, we are an entertainment platform in multiple languages across various devices. What really works for us is video advertising where we reach out to consumers and get them to know more about our content. Digital definitely is the largest platform where we invest.

With the launch of Disney+ and AppleTV around the corner, competition is intensifying among the top players. How are you planning to strengthen Zee5’s presence?

Our objective for Zee5 is to be available for consumers wherever they are, so distribution and availability are the main objectives for us. Zee5 is available across mobile platforms, whether it is Android, iOS or Windows, and at the same time, we are also available with connected devices like Amazon Firestick. We have partnered with all smart TVs in the country whether it is Samsung, LG, Cloudwalker or Xiomi. The idea is to allow the consumer to watch Zee5 on the device they want. We are not just offering our consumer a choice in time and content but they can also use the device of their choice. We have also partnered with several telecom operators – Reliance Jio, Vodafone Idea Limited and Airtel – which is very important at this point in time for OTT platforms.

There has been a paradigm shift in the taste of the Indian audience, especially among the youth, who want more contemporary and relatable content. How are you planning to be relevant to the audience?

Zee5 plans to attract audiences in two ways – AVOD and regional content. On the AVOD front, we continue to enjoy the benefits of recurring consumers. These are loyal fans of our network shows who want to watch these on Zee5.

On the other end, if you look at digital today, the next 500 million growth in India will come purely on the back of the vernacular content. Today, Zee5 is the only OTT player offering consumer content in 12 different regional languages. And, we will continue to offer more and more original content with noted artists, producers and directors across Tamil, Marathi, Malayalam and Bengali fraternity.

Where does Zee5 stand on its mission of achieving 100 million active users?

When we announced our Q3 results, we had mentioned that we are around 56.3 million active users. We will be announcing the full year number very soon, but we are on track to achieve the target that we have announced.

Recently, it was stated Zee5 will reduce its dependency on the ad model and focus on subscription. How are you planning to achieve it, considering Zee5 has a freemium model in the global market?