Flush with Tencent money, Gaana eyes a 200-million user base

After reaching the 100-million user milestone, music streaming app Gaana is upbeat about its expansion plan. Talking to BestMediaInfo.com, Prashan Agarwal, CEO, Gaana, talks about its plan to increase the overall music apps market and how the platform is taking on competition from international and home-grown players 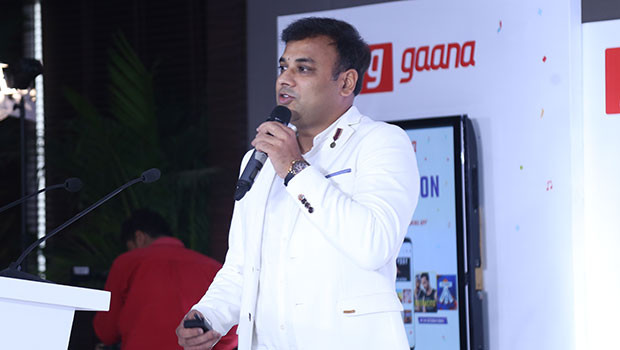 India’s top music streaming app Gaana is looking at expanding the listenership of the entire segment in and outside the country.

The platform, which claims to be bigger than all remaining players such as Wynk, JioSaavn, Amazon Music, Hungama and Spotify put together, has set its eyes on a user base of 200 million.

The Times Internet-backed app recently received Rs 740 crore in funding from Chinese technology giant Tencent. The platform plans to use majority of the money in increasing user engagement and expanding its base.

In an interaction with BestMediaInfo.com, Prashan Agarwal, CEO, Gaana, said, “A major portion of the investment is being deployed on user activation, where Gaana is leading the market by a margin and it will continue to see a heightened marketing activity to continue to grow.”

“The market will reach 400 million users in the next couple of years. We intend to be the dominant player,” he said.

The second big investment of the platform is on technology. Music recommendations, machine learning and data science are something that Gaana has heavily invested in. The team has grown from 115 people to 200 people, with most hires in the product and tech teams,” Agarwal added.

Though its paid subscriber base is going strong, with almost 4X growth in the last few months, Gaana doesn’t want to make it its only priority and wants to focus on increasing the app-based music streaming market in the country.

The music app claims to have a library of 45 million songs across Bollywood, international and regional languages. According to the company, 15% of listeners come from Maharashtra, 12% from UP, and 10% from Delhi. Gaana also claims to have recorded the fastest growth in the United States, Australia, Canada, UK and UAE. The music app has witnessed over 78% growth outside India.

The platform has added a video feature called Gaana video.

Talking about the intensifying competition from Spotify, Wynk, Hungama Music, YouTube Music, JioSaavn, Google Play Music, Apple Music and Amazon Prime Music, Agarwal said the biggest differentiation for Gaana is the brand. “The kind of brand recall we have built for Gaana, the name itself is the first and biggest differentiator,” pointed out Agarwal.

Second is the product experience where Gaana has done a lot of innovation for the Indian customer — right from having the app in 12 languages, to voice assistant to lyrics, to video to recommendations.

“And these things are such that you cannot essentially bring in if you come from a foreign territory, you require an understanding of the music landscape of India. So, these two factors, along with the content strategy where I think we’ve focused is not just on Bollywood, but across all the languages,” said Agarwal.

Gaana is at least two times bigger than competition on pretty much all the languages. “The understanding of regional music will create more and more differentiation for us, as we go forward,” he said.

In terms of acquiring more users while the competition is become more challenging, Agarwal is clear about the growth strategy. “One is to build the right product, the best product for the Indian customer.”

“We think we understand the Indian customer the best. So from a product experience perspective, we are miles ahead. In terms of the usability of the app, we have launched a simple user interface, as well as recommendations, lyrics and new features,” he emphasised.

Unlike the Western world, where you have defined genres of rock and pop, India has a mixed culture. And so to be able to crack recommendations would be the biggest hurdle for any new app that comes in the country.

“And that will continue to be a very big differentiator for us because to be able to build the data that we have built over the last six years, would be very difficult for a new app to replicate,” Agarwal said.

The entry of Spotify and YouTube Music has not made an impact on Gaana’s business. In fact, the platform is seeing a heavy growth, month-on-month.

Paid subscribers continue to be a low single digit of Gaana’s user base. But the good thing for the platform is that the subscription has been increasing. Last year, after a value rationalisation, when Gaana priced the product at Rs 399 per year, it has seen a four-time growth of subscribers on the platform.

Talking about the measures to increase the number of paid subscribers, Agarwal said the Indian customer is a very value-conscious customer.

Secondly, from a maturity standpoint, music streaming is still in its early days, where its growth is more important. So Gaana is focusing on increasing the base first, and then as the user engages with the app, they will create more and more hooks to get paid subscription.

“It’s a big focus area for us, and that’s why focusing on it; we grew the number by four times in the last one year,” said Agarwal.

The music streaming apps market has evolved in a fundamentally disruptive manner. 2011 to 2014 was the era of the desktop, when people, mainly the IT-savvy crowd, mostly went to the websites to listen to music online.

The second inflection point was the data revolution with prices coming down in September 2016. These were the two big inflection points that caused huge growth in the music streaming market. About two years ago, this market had only 50 million users and it has grown three times in the last two years.

Agarwal sees a lot of opportunity in the market. “Our fundamental USP is that we have built the app for Indian users. When you look Indian connectivity, network issues are plenty. So, the app needs to work through 2G, 3G and 4G to be able to grow the market. So as the app goes in tier III cities, and as we build more users there, this will be a big USP for Gaana. Our app works in all kinds of network. Our competitors will face challenges in developing their app for the Indian customer,” he said.

Gaana brings music to the masses and the classes. So the idea is that it looks at all the economic strata from a poor person to a rich person, because music is a companion to everyone.

“So our brand positioning is pretty wide in that sense. We basically want to tell people that music is the emotion that you want to connect with, and Gaana is the app that you want to go to,” said Agarwal.

Advertising and marketing plans for 2019

Last year, the brand’s focus was on emotional brand campaigns where they were showcasing music and emotion as a connect in terms of various situations.

“But now our campaigns are feature-focused where we are essentially saying that once you have got used to the app, these are the features that you should utilise to build more engagement on the platform. So this year, the brand campaigns will introduce multiple features like lyrics, voice assistant and the likes,” said Agarwal.

Gaana has unveiled two key features – Gaana Video and Artist Dashboard. Gaana Video is Gaana’s exclusive vertical video format, built for mobile, and created in exclusive partnership with India’s top artists. Artist Dashboard is a self-service dashboard for artists to access insights and analytics around how their fans are consuming their music on Gaana.

In addition to these new products, over the past year, Gaana has driven several industry-first product innovations, which have contributed to Gaana’s growing consumer engagement. The first being Gaana’s AI-led ‘For You’ screen that offers personalised song recommendations and is used by over 10% of Gaana users.

Secondly, Gaana’s voice assistant enables easy, multilingual search and is used by over 24% users. Thirdly, Gaana’s AI algorithms drive its personalisation algorithms throughout the app, leading to over 17% of consumption coming from recommended music.

Agarwal said they are doing more and more multilingual brand campaigns. Currently, they have a brand campaign running in five languages.

In Gaana’s advertising budget, digital has the maximum share, followed by TV.

“For us, TV is a communication medium where we are trying to get the brand out, trying to get more users to try the app and features. As we are going deep into the country, in tier III cities, the idea is to use more GECs and a lot of Hindi movie channels, which have a more massy appeal,” concluded Agarwal.