Hosted and produced by Dwayne Johnson, the show premieres today and will be telecast every weeknight at 9pm on Zee Café and at 11.30pm on &flix 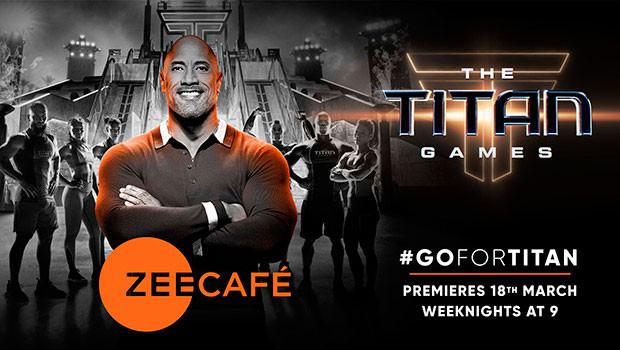 Zee Café is set to launch ‘The Titan Games’, a show where a lot more than just blood, sweat and integrity will be at stake for the contestants. Inspired by Dwayne Johnson, the series will see athletes pitted against each other with nerve - wrecking challenges. As contestants from different walks of life compete, the games will test their physical and mental strength in their fight to achieve the impossible. The Titan Games is all set to air in India on March 18, 2019, weeknights at 9pm on Zee Café and at 11.30pm on &flix.

Describing how one can be a Titan, Johnson said, “What exactly does it mean to be a Titan? It means a desire to climb higher, pushing through your limits, and to reach the next level you didn’t know existed. I envisioned and conceived these games for the everyday people who are ridiculously talented athletes going head to head.”

Ordinary people from all over America with extra-ordinary determination have found their way into The Titan Games as they get ready to battle it out against each other. It is an obstacle course challenge that showcases real-world warriors test their human limits in an ultimate showdown of strength and fortitude to conquer Mount Olympus, the winning point of the biggest athletic arena, ever designed. In his own words, Johnson said, “If you have a weakness, Mount Olympus will reveal it.”

Speaking about the show, Shaurya Mehta, head, Premium Channels, Zeel, said, “Produced and hosted by Hollywood star Dwayne Johnson, The Titan Games is a ground-breaking athletic competition that has become a global benchmark for endurance-based reality shows, having opened with the highest ratings. We are delighted to bring this celebrated show to the Indian audience, continuing in our endeavour to provide new content for our viewers. Through our strategic partnerships with global content studios, we are constantly looking at bringing high quality, internationally successful content to the engaged audience base of Zee Café.”

Zee Café has rolled-out an extensive marketing plan for The Titan Games. Through a high impact campaign #GoForTitan, the channel will engage with its viewers through print, TV and digital mediums. In this campaign titled - Titans Amongst Us – Zee Café will be showcasing the inspiring stories of every day individuals who have pushed all limits and shown us what it is to be a Titan. Through these stories, we aim to encourage people to step out of their comfort zones and become a Titan in their daily lives.

Prathyusha Agarwal, Chief Marketing Officer, Zeel, said, “Zee Café caters to a highly motivated audience. They are not just looking at it as entertaining content but are also seeking inspiration from the same. While there are many reality shows around, The Titan Games is a highly differentiated property that inspires audiences to push boundaries, set new goals and achieve greatness. Our campaign thought #GoForTitan inspires people to pursue greatness through the power of human will - go for great, go for Titan. Keeping our proposition, ‘All Eyes on New’ in mind, we hope to extend our relationship with our engaged consumer bringing them The Titan Games.”