Times Network’s new campaign is layered with a light-hearted and humorous tone targeting women, with a compelling and differentiated pitch of making their man better with the Times Network pack, which is available for Rs 13 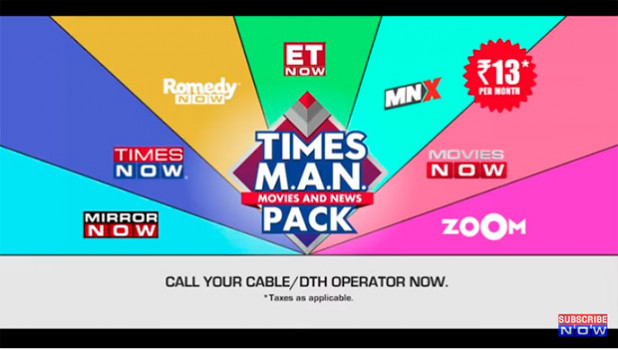 In line with TRAI’s new tariff regime, Times Network has rolled out the Times M.A.N (Movies and News) pack campaign.

The campaign captures the distinct attributes of its bouquet of brands, which consists of popular English movies and news channels.

Leading with the insight, ‘you are what you watch’, the campaign is layered with a light-hearted and humorous tone targeting women, with a compelling and differentiated pitch of making their man better with the Times M.A.N pack (a smart acronym for movies and news pack), priced at Rs 13 per month. Commenting on the campaign, MK Anand, MD and CEO, Times Network, said, “With a clutter-breaking proposition, the Times M.A.N pack campaign moves beyond the general focus on price appeal, which most networks are basing their campaigns on and exemplify the distinct traits of our premium brands as we subtly make a statement that Times Network viewers are smarter, savvier and more stylish due to their superior content choice. We are encouraged by the reactions on social media and I am glad that the campaign has successfully evoked curiosity among consumers about our offering, which further reinforces the network as the preferred choice of smart urban viewers.”

The campaign has been conceptualised by Famous Innovations for Times Network and the network has rolled out a 360-degree aggressive marketing campaign. The 45-second TV commercial is available across key geographies, including HSM, West Bengal, Karnataka and Tamil Nadu. The have booked radio spots across four leading FM stations. The network has also undertaken print ads and innovations across all the editions of The Times Group dailies, social media marketing across prominent digital mediums, and communications across network channels and digital/social assets.