Take out the masses from the media, and you will have no media left, says 21st Century Fox president Uday Shankar 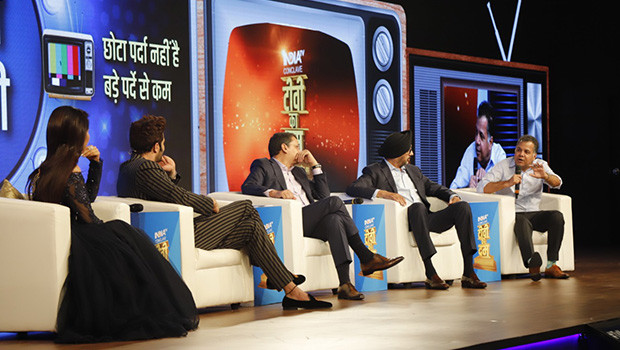 "You cannot take out mass from 'mass media', because then there will be no media left", said Uday Shankar, President, 21st Century Fox, Asia, and Chairman and CEO of Star India, at "TV Ka Dum", a daylong conclave organized by India TV in Mumbai, attended by top Bollywood and TV stars, last weekend.

Participating in a panel debate with Raj Nayak, Former Group COO of Viacom18 and NP Singh, CEO of Sony Pictures Networks, Shankar, who was recently named Chairman, Star and Disney India, and President, The Walt Disney Company Asia Pacific, said, "Television shows are made to get ratings, because the viewers are the ultimate arbiters. TV shows are not made for private viewing. Whether TV shows, newspapers or films, unless the masses read or watch them, you cannot judge their popularity."

Shankar added, "Ratings are only the output to judge the content that is produced. Ratings is the sum of how many number of people watched a particular show. No astrologer can predict the ratings of a show. Producers are interested only in what viewers would like to watch or know, whether it is horror, comedy or love story."

On the issue of why more and more TV shows based on superstition and horror are being produced, Shankar said, "There are serious TV shows too, like Satyamev Jayate, but to cater to a nation of 125 crore people, you cannot have a single size boot. One has to make shows according to the size of the foot of different types of people."

"TV networks have a broad spectrum of shows that include entertainment, and shows which are serious and some light which the viewer can enjoy. When a person returns home tired after daylong work, and sits with his family to watch TV, he or she needs entertainment. You can't go on hectoring him or her all day with speeches. Give some time to speeches and some to entertainment, in the language which he or she can understand and accept.”

"Some vested interests, including some politicians, do not like to watch certain TV shows. My answer is: if the people of our country have become more conscious and they are asking questions from those in power, it is not because of consciousness spread by the political class. TV programmes, whether entertainment or news, have spread awareness among the people."

Former Viacom18 COO Nayak said, "My question is why do those who raise objections watch TV programmes that are negative? If some TV shows get good numbers it is because they are in demand. But one should also know that people watch shows like Satyamev Jayate, Balika Vadhu, Shakti (on transgenders), Udaan (on bonded labour). These shows entertain and also try to bring about social changes.”

Nayak said, "The Star Plus show Saathiya was on women empowerment and shows like these educate people. Shows are made to care to different tastes of viewers. If more people watch the TV show Naagin, let me say, television did not create Naagin. Already there were four Bollywood films on Naagin.”

Nayak added, "Television and cinema reflect what is happening in society, they reflect what people want. Whenever we launch a new show, we never look at the TRP. No channel makes shows after watching TRPs. Shows are made only when there is good content. TRP is only a byproduct. Of course, at the end of day, the channels want TRPs because, after all, we have to run our company."

Sony Pictures Networks India CEO Singh said, "I agree that television is an important medium for creating social impact.  Our shows did create a positive impact on society. Kaun Banega Crorepati is a very powerful and successful format, and its success was a given. It is a vehicle to create a positive and social change impact.

"We showcased stories of small-town people whose work inspire others. That is why we decided that we will show the life journey of KBC participants so that it can inspire viewers."

Asked by hosts Maniesh Paul and Charul Malik as to why TV shows are pulled off the air abruptly by GEC networks, Shankar replied, "It's natural that when viewers do not like a show, it is pulled off the air. What can we do? We are not running an autocratic regime where shows will continue to run by government diktat, even if viewers like it or not. Here you have to respect the wishes of the people. For us, shows are a commercial enterprise. If viewers do not watch the show, how can we sell it (to advertisers)?”