#ShakeYourHungerAway with Smoothix, says Soulfull to consumers on the move

The campaign shows the world does not pause because you are hungry and hence carry Smoothix and have it when hunger strikes. It is an instant drink mix that gives the goodness of 12 Indian super grains 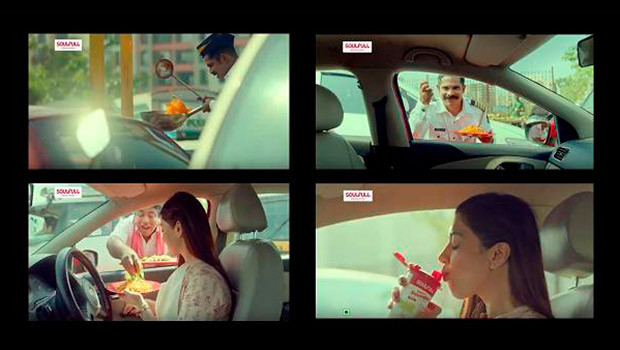 Soulfull, the delicious millets-based snacking brand, has unveiled its digital campaign #ShakeYourHungerAway for the launch of Smoothix, an instant drink mix for today’s health conscious consumers.

The campaign encourages healthy living among consumers by providing the goodness of ancient Indian grains such as millets in an all-natural, easy-to-consume and tasty product. The narrative of the campaign through a humorous approach throws light on workaholic consumers who are completely engrossed in work but often overlook mealtimes.

The campaign has been launched with a digital video focussed on consumers leading an active lifestyle and planning their day but not their meals. It focuses on highlighting the message that the world does not pause because you are hungry, hence Smoothix, just #ShakeYourHungerAway whenever it strikes — an instant drink mix that gives you the goodness of 12 Indian super grains.

The first video in the series begins with a woman driving to work and the traffic policeman in his traffic booth rustling up a plate of noodles and serving to the woman, which is followed by a rickshaw driver and other traffic members garnishing her plate. But wait, that’s not going to ever happen in reality. The world won’t stop for your hunger and so have the solution in your hand. The videos play on the thought of the campaign — why let hunger stop you? The video ends positioning Smoothix as the quick solution for consumers who can gain the benefits of ancient Indian grains without added sugar by simply adding water/milk and enjoying their shake.

The brand plans to launch few more videos in the near future with different characters in the same context in a bid to create conversations around healthy snacking even with hectic schedules. The digital campaign will be launched across social media handles of the brand. The brand plans to connect with consumers through contests and activities. They will be promoted across multiple platforms such as news, sports, entertainment and other high affinity genres. The brand will also be undertaking offline promotions through print media, radio associations and on-ground activations. The brand has created a special microsite and social media handles (Instagram and Facebook) for the product launch.

Prashant Parmeswaran, CEO and Co-founder, Soulfull, said, “At Soulfull, we believe in harnessing the power of ancient Indian grains such as millets to create innovative food products, which are tasty without compromising on the nutrition aspect. The #ShakeYourHungerAway campaign for Smoothix focuses on consumers who want to take care of themselves but are not able to do so because of their hectic schedule. The ad is a light-hearted take about taking your nutrition in your hands.”

Highlighting the thought behind the campaign, Rajeev Ravindranathan, Founder and CCO, People Design and Communications India Pvt. Ltd., added, “Soulfull Smoothix is a curious animal. It’s a hunger buster unlike any other. Made of 12 super grains that are nearly impossible to consume otherwise. And here you go, a cool shaker that can whip up a healthy tummy filling, soul massaging beverage in seconds. With such a strong product story, all we had to do was position it to the right people — the busy and loving it bunch who simply do not have time to deal with hunger in the middle of crazy routines, unless they turn to unhealthy options. And that’s how our videos pretty much wrote themselves”.

Established in 2011, Kottaram Agro Foods with its flagship brand Soulfull has reinvented the humble grains, millets, to create a product that is honest, relevant and convenient for the 21st century consumer.