‘No Haggling, No Hassles’ with UberAuto services in Chennai

Conceptualised by Ogilvy Bangalore, the campaign shows UberAuto taking away the daily hassles of hailing an auto by harnessing the power of technology. It aims to connect with communities, driver-partners and riders in Chennai 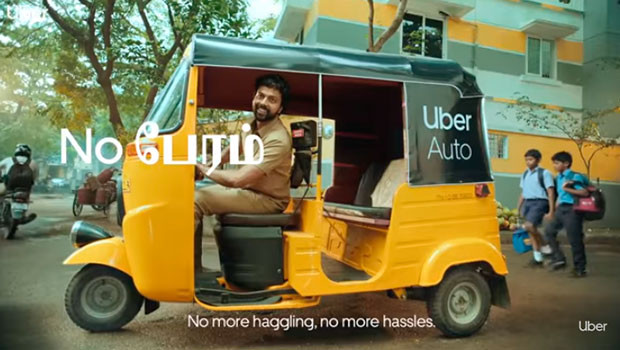 Uber, the on-demand ridesharing company, has launched a campaign ‘No Haggling, No Hassles’, encouraging people to avail UberAuto services in Chennai. It promises consumers faster pickups and convenient rides without ‘haggling or hassles’. It launched UberAuto, with fares starting at just Rs 25 in Chennai.

Set against the backdrop of a dramatic courtroom scene, much like in some Tamil movies, the campaign captures the story of an accused waiting for his witness to arrive to his aid. Conceptualised by Ogilvy Bangalore, the campaign shows the name of the protagonist (witness), ‘Selvam’, echoed around the city dramatically. As unique characters ranging from policemen to politicians scream Selvam’s name in anticipation, we finally see Selvam haggling with a regular rickshaw driver for his ride. As the voiceover resolves Selvam’s conflict by introducing him to UberAuto, we see him happily arriving at the court much to the relief of everyone. The film ends with the most relieved of them all, the accused who is thankful that his witness has arrived on time.

The campaign is conceptualised by Ogilvy Bangalore.

Sonal Dabral, Vice-Chairman India and Chief Creative Officer South and S.E. Asia, Ogilvy, said, “UberAuto has brought a dramatic change to the way our audience uses auto rickshaws by bringing them never-before convenience and peace of mind. It’s therefore fitting that we are introducing this epic service to our audience with an epic story full of humour, drama and suspense. I’m sure that our audience will enjoy this campaign as much as we enjoyed creating it.”

Commenting on this initiative, Saakshi Verma Menon, Head of Brand, Rides, India and South Asia, said, "Uber’s vision is to build globally and live locally. UberAuto takes away the daily hassles of hailing an auto by harnessing the power of technology. This campaign aims to connect with our communities, driver-partners and riders in Chennai. Ogilvy South has been a great partner in bringing this creative idea to life in Chennai."

Ram Moorthi, President, Ogilvy South, said, “The flavour of the relationship between an auto rickshaw and its rider is a uniquely local one. From Ogilvy’s South office, we’ve used a South Indian flavour to help UberAuto convey its hassle-free message to its customers. Full credit to our client partners for going with our audience understanding while keeping us honest in terms of the Uber brand’s values.”

As part of the campaign, Uber is also set to release print, outdoor and radio ads with the same message.