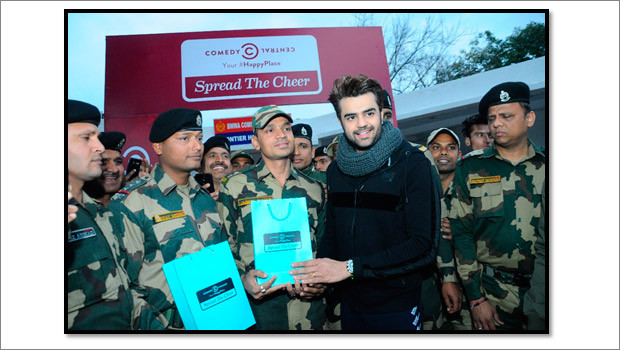 The BSF jawans lead a very tough life and honouring the valour of these jawans, Comedy Central resolved to step into the New Year with hope and cheerfulness by spreading happiness among these heroes at their base camp in Jammu.

Ferzad Palia, Head, Youth, Music and English Entertainment, Viacom18, said, “Spread The Cheer is an extremely special initiative of Comedy Central with an unwavering mission to touch people’s lives and extend the channel’s ethos of being #YourHappyPlace in true sense of the term. This year, we scaled up our endeavour by taking actor-entertainer Maniesh Paul to the BSF training camp in Jammu to foster an unforgettable evening and attempt to requite the service of our real heroes, who tirelessly protect our borders from every kind of threat.”

Taking time off from their arduous duty, over 200 BSF jawans and dignitaries at the camp were entertained by Maniesh Paul.

Paul was given a special tour of the camp, starting with a visit to the Martyrs’ Memorial paying tribute to the BSF jawans who heroically lost their lives in the line of duty, followed by a glimpse of the intensive training demonstration of the BSF commandos and finally playing kabaddi with the jawans.

At the end of the programme, on behalf of the BSF Frontier, Paloura Camp, N S Jamwal, IG BSF, Jammu Frontier, thanked Paul for a splendid evening with the BSF jawans and presented him with the Frontier Jammu Memento on behalf of all BSF border men.

Commenting on his experience, Paul said, “Collaborating with Comedy Central for ‘Spread The Cheer’ and visiting the BSF camp has been an extremely gratifying experience. We play heroes on screen but these fearless BSF jawans are undoubtedly the symbol of heroism and I salute them for their steadfast onus to the job. My visit to the hallowed grounds of these brave jawans and an evening filled with merriment is etched as one of the most memorable and treasured events of my life. I congratulate Comedy Central for a splendid campaign in bringing happiness to such an integral part of our nation and I look forward to visiting the BSF camp again.”

The fun and frolic concluded with Comedy Central surprising the BSF jawans by gifting them specially created hampers from Ustraa, a specialised men’s grooming products brand.

‘Spread The Cheer’ has also associated with Ketto, a crowdfunding platform for social, creative and personal causes, to help amplify the efforts of the Aditya Mehta Foundation. The foundation raises funds for the ‘Divyang Jawans’ initiative, which strives to enable para athletes with equipment and training to participate in various para sports events, including the upcoming Paralympics 2020.