WhatsApp asks us to ‘Share Joy, Not Rumours’ in its debut campaign

The messaging app along with Mumbai agency Taproot Dentsu and filmmaker Shirsha Guha Thakurta developed three 60-second films to help address challenges one faces while communicating online. It is also an attempt to fight fake news ahead of elections 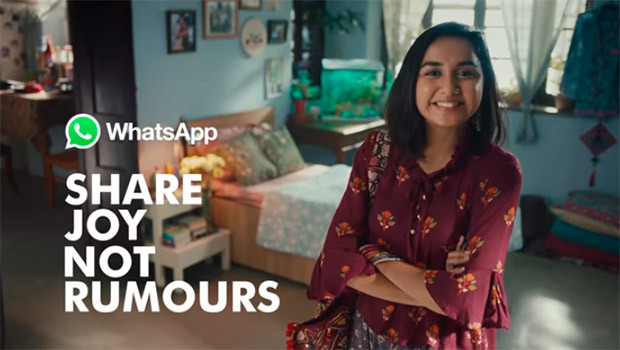 Messaging platform WhatsApp has launched its first-ever TV campaign called ‘Share Joy, Not Rumours’, as the latest step in a comprehensive effort to address the challenge of misinformation and pernicious rumours.

WhatsApp worked closely with creative agency Taproot Dentsu and filmmaker Shirsha Guha Thakurta to develop three 60-second films. Each film conveys real scenarios about rumours that have spread on WhatsApp via spam as well as in family and school groups. Each film's protagonist teaches someone important in their lives to not spread rumours and to use WhatsApp controls such as the ability to block senders and leave groups where rumours are spread.

The first film tells the story of Kavya who moved to Delhi. It's her first time living away from home, so she uses WhatsApp to stay in touch with her family. When her uncle shares fake news with her family, Kavya calls to explain him that he can leave the group from where the rumour was forwarded.

In second one, Rajat is a popular guy in his University and runs a WhatsApp group for his class. When he receives a shocking message from a classmate, he talks it over with the sender and asks him to think twice before sharing rumours again. The third one showcases the story of Geetha who is a foodie and uses WhatsApp to stay up to date with local businesses and send recipes to her friends. One day she receives a rumour from an unknown contact so she talks it over with her mom and chooses to block the user who sent the message.

Shirsha Guha Thaktura, Director, Oink Films, said,“WhatsApp has become an integral part of society in India — it's how I stay in touch with my family and run our film production house. So this project was special for us at various levels. We of course made a WhatsApp group for the project in the name of 'WhatsApp on WhatsApp'. But WhatsApp is also being misused and can be a source of rumours and it is something that affects us all the time. We created these three films to help address the challenges we face in communicating online.”

WhatsApp conducted extensive research with users in India and based each film on a real user's experience. The three films will be available on TV, Facebook and YouTube in 10 languages to reach the diverse population that makes up WhatsApp users. The advertising campaign is timed to start just prior to the elections in Rajasthan and Telangana and WhatsApp will build on this effort, headed into the national election next year.

Bosco Zubiaga, who led production of these films for WhatsApp, said, “We're humbled by the impact that WhatsApp had on people's ability to freely connect with their loved ones. We recognise at the same time connecting people can also lead to the spread of misinformation, which has to be confronted. We hope this campaign will help educate people how to stay safe on WhatsApp.”

Over the last several months, WhatsApp has made a series of changes, including placing a label on forwarded messages to inform users when they have received something not from their immediate contact and a limit on how forwarded messages can be sent. In addition, WhatsApp continues to build on anti-spam detection capabilities to ban accounts that engage in unwanted automated activity.