Can Arnab Goswami repeat the success of Republic with Hindi news channel Bharat?

With Republic Bharat gearing up for the launch next month, BestMediaInfo.com analyses the content, distribution and revenue strategy of the channel, and the impact India’s most popular TV news face Arnab Goswami will have in the Hindi market 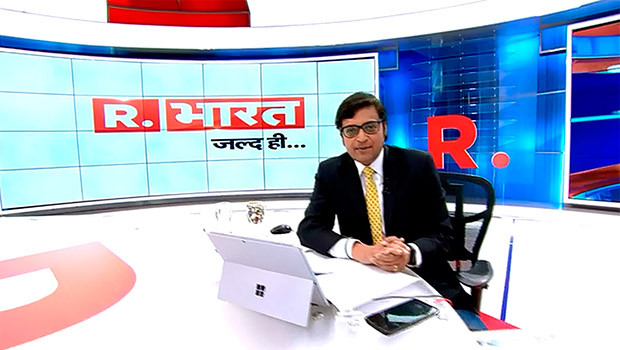 In the second year of his entrepreneurial drive, Republic TV Editor-in-Chief Arnab Goswami has announced the ambitious launch of their second news channel in Hindi — Republic Bharat. The launch of the channel is expected to be announced in the presence of Prime Minister Narendra Modi at a two-day mega conclave on December 18-19 being organised by Republic TV.

While the on-air promos say it is coming soon, the channel is gearing up for launch on Republic Day, which will also be the culmination of a dream that Goswami saw with the launch of the English channel in 2017. The media house started working on the plans to launch a Hindi channel immediately after the flagship English News channel Republic turned one earlier this year.

Despite the Hindi news TV market being heavily cluttered, Republic CEO Vikas Khanchandani feels there’s still an opportunity for a new player that has a differentiated offering to reach out to viewers across the Hindi-speaking belt.

Experts feel the timing for the launch of Republic Bharat can’t be better given that the industry is witnessing a high news consumption cycle because of the upcoming elections. Advertisers are also placing big money on the genre to reach out to consumers.

“There is no better time to launch this channel because this is a high news consumption time. Everybody is glued to news during this time,” said Ashish Bhasin, Chairman and CEO, South Asia, Dentsu Aegis Network.

BestMediaInfo.com analyses various aspects of the upcoming launch of Republic Bharat and whether the channel will be able to make an impact in the over-crowded Hindi News TV market.

The channel will capitalise on the brand value of Arnab Goswami, who is already a known name in the Hindi-speaking market also.

Experts predict the channel may draw a lot of traction with its launch because of Goswami’s brand image and style of programming. Also, heavy political programming because of the elections will ensure the channel hits the ground running. The launch in the presence of the Prime Minister will also make it among the largest launches ever, in terms of TRP as well.

In a conversation with BestMediaInfo.com, Khanchandani refrained from sharing too many details about the launch but said that Goswami enjoy a lot of goodwill and popularity in the Hindi-speaking markets too and Republic Bharat would utilise him in every possible way.

Bhasin said, “Arnab himself is a celebrity. And in a very short period of time, Republic managed to be successful. The track record is great. Now if he can translate the same formula of success on to Hindi, it will be because of his track record.”

According to Shashi Sinha, CEO, IPG Mediabrands, Arnab’s strength is that he brings stories and adds his strong point of views to them.

“I’m not sure if he will do the same thing in Hindi or he will have some different strategy but consistency will be the key to a sustained success,” Sinha added.

Known as the master of the opinionated debates, Goswami is expected to use this as a ladder to get quick success in Hindi as well. Though, almost every channel has debates and opinionated content as a major chunk of its programing, most lack quality when it comes to offering active debates to the urban, educated, opinionated Hindi viewers.

“There’s a huge urban market available to Hindi channels as most channels are not catering primarily to them when it comes to debates. There’s a gap. Ravish Kumar as a journalist is doing it, not as a channel,” said Priti Murthy, CEO, OMD India.

Bhasin said a popular face like Goswami’s can give the channel an initial leverage but eventually the long-term game would depend on the quality of content.

“You will go to a channel where you like the content. News is the only part of TV, which is a habit like newspapers. You will follow whosoever will provide you with good content consistently in news with analysis and breaking news,” he said, adding credibility would be the key for its success.

“What we should look out from this is more quality Hindi news, which not all of the Hindi news channels have. It should appeal to the urban, educated, opinionated Hindi viewers. Active debate and philosophy that Arnab started should continue,” Murthy added.

“Bharat may become one of the leading channels in years to come. There is always space for someone who brings good content. If Republic brings in good content that clicks with viewers, there is always space. But if they are exactly like other channels, it will never do well in the long run. So it all depends on their content, differentiation and how it clicks with viewers,” said Bhasin.

However, some feel Goswami’s success formula for English news may not work for the Hindi audiences

“Considering that there are too many established national players in the Hindi news genre, even though they have a good product, breaking into the top 3 will not be an easy task,” Sinha said.

The success of any channel launched in India, especially in the Hindi news genre, largely depends on its distribution strategy. Because no matter how good the content is, if it doesn’t reach the right platform and is not optimally placed, it may fail to make a mark.

“When compared with English genre, Hindi has a lot of depth in distribution and it takes a lot for a new player to overcome the distribution challenges,” Sinha said.

Republic Bharat, however, is likely to make splash from day one. The channel may go live on DD Freedish simultaneously with other carriers. The availability on Freedish will ensure millions of eyeballs, which would eventually be converted into a major revenue stream.

Bharat may not face any distribution hurdles as Republic TV already has a deep reach and the Hindi channel can build on it.

“Republic TV has a reach of more than 3,300 + headends, which is the highest for English news genre. The Hindi news channels have connectivity across similar no. of headends, except that the dispersion of markets will change. We will make sure Republic Bharat will be in the top cluster of channels with its reach,” Khanchandani said.

“Even as the channel will be free-to-air and available on DD Freedish, a strong distribution will make the difference,” Sinha added.

The viewership and revenue pie

Eyeing to break into the top five most-watched Hindi news channels, Republic is hoping Bharat becomes among the leading revenue-earning news channels in the Hindi genre by placing itself as a premium advertising platform.

The total annual revenue of the Hindi TV news industry is currently in the range of Rs 1,700-1,800 crore and needless to say, a large share goes to the top players. According to industry estimates, the top five players command over Rs 1,200 crore revenue. This number will see a significant jump as the viewership and advertising spends will expand dramatically as election coverage and programming picks up.

On the other hand, the revenue of English news genre is in the range of Rs 800-1,000 crore while regional news earns around Rs 1,500 crore.

Considering the revenues of the Hindi and English news genres in proportion of the viewership, Hindi news still has a huge scope to grow if the industry has its way. In a recent in-depth article by BestMediaInfo.com, ‘What’s ailing revenue growth of Hindi TV news genre?’, leading broadcasters believed absence of unity in the industry, wrong measurement matrix, flawed ad break strategy and bias of media agencies and advertisers towards English news channels, despite Hindi having a better reach, was affecting its ad rate growth.