Conceptualised by Taproot Dentsu, the campaign shows how despite the contrasting lifestyles of kids and adults, Parle-G has been a binding factor across ages 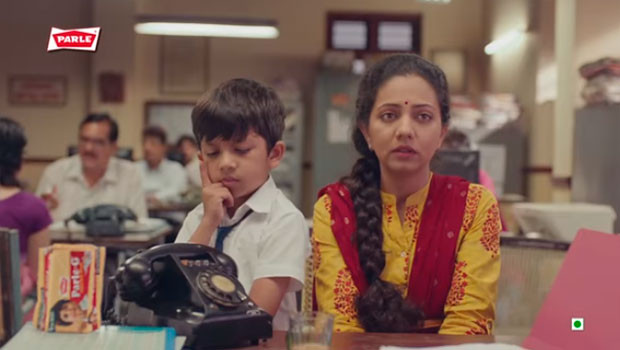 Parle-G’s recently launched campaign, #ParleGDigitalGenius, offers a refreshing approach towards re-instating its position in the minds of kids and adults. It brilliantly captures the fact that Parle-G has been a part of every generation and has constantly evolved to make it an intrinsic part of every child’s life even today.

The campaign consisting of three films shows the drastic difference between the lifestyle of grown-ups and kids. The first film set in an office room shows how a boy is amused by a landline phone in the office. He asks his mother various questions about how to send a message or watch videos through the phone. The officer then says there was no smartphone during his time. The boy asks if Parle-G biscuit existed and he says yes. The video ends with the boy saying that at least there was something smart at that time.

The second video shows a girl screaming in fright when she sees a typewriter without a screen. She blames her younger brother for breaking the screen. But the grandfather says that it is a typewriter and not a laptop. The younger one asks in disbelief if the taste of Parle-G was same at that time as well or not.

The third film shows a conversation between a mother and a daughter about a Walkman. The daughter asks why there are no options for playlists, shuffle and wireless. The mother then shuts the girl by giving her a biscuit of her time. But the daughter says that Parle-G is a biscuit of her generation and not her mother’s.

“It becomes difficult for a brand with a large footprint across various socio-economic class and age groups to talk to all of them with just one piece of communication. While our last piece of communication propped nostalgia and showed how it has been a part of the growing up of most Indians, this time we planned to take a different route with a touch of humour and fun. But, we realised that we can’t alienate the old generation and thus the current communication bridges the gap between the needs of both elders and children. The campaign talks about how this brand has been a part of the grown-ups and it’s still relevant to kids,” Shah added.

The campaign has been conceptualised by Taproot Dentsu.

Pallavi Chakravarti, ECD, Taproot Dentsu, said, “Parle-G is an iconic brand. It is fair to say that every family in India at some point has consumed it. The world of children’s confectionaries and biscuits has seen a boom in the last decade. Parle-G has become a default choice from a desired choice. As an agency, we ensured that people reach out to it. The task was to make it the desired one as it continues to be a default choice.”

“Though our core target is kids, yet adults will relate to the ad as they have seen their children or kids in the family do that. For children of this generation, dialup phones, cassettes and typewriter are fossils, which are actually iconic for the adults. So, we zeroed down on a theme that will immediately appeal to kids and will relate to adults as well,” she added.