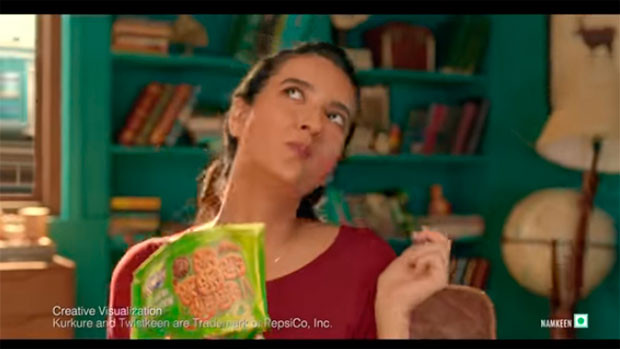 PepsiCo India has introduced a new category in the salty snacks industry with Kurkure Twistkeen, a modern twist on namkeens in a convenient finger snack avatar.

The launch film highlights Kurkure Twistkeen as an interesting twist to traditional namkeens in an all new finger snack avatar. The 30-second TVC, in the signature quirky style of Kurkure, features a couple trying to enjoy their favourite namkeens while watching television. While they continue to watch television, the guy takes out a packet of Bikaneri bhujia to munch along. But before he can enjoy the first bite, a train passes by, shaking the house and everything in it, and making him spill the bhujia in his hand.

Meanwhile, we see the girl enjoying the traditional taste of bhujia in her Kurkure Twistkeen without any hassle. The visual ends with brand tag line of ‘Kurkure Twistkeen khul jaye toh, Namkeen me Twist Aa jaye’.

The TVC was released across all major digital platforms and movie and entertainment channels on TV.

Gaurav Verma, Director Marketing – Indian Snacks, PepsiCo India, said, “Kurkure is India’s most loved snack brand, which has been innovating and transforming to cater to changing consumer needs. We have created a new category in the salty snacks segment through the launch of Kurkure Twistkeen by reimagining traditional namkeens and offering it in a tasty finger snack format. Our recently released thematic on Kurkure Twistkeen also communicates the fun and convenience of relishing your favourite namkeens now in a finger snacks avatar. The initial response to Kurkure Twistkeen has been tremendous and we are confident that it will be a winning proposition for the consumers.”

Varun Channa, Managing Partner, JWT, said, “Twistkeens as the name suggests had a twisted brief and the creative team had fun twisting it further — the creative magnification of the messy eating with the train passing, the husband-wife tiff over the remote and the use of the snack for the happy ending makes for a memorable film with typical Kurkure humour.”

Kurkure Twistkeens is available in Rs 15 and Rs 55 price packs available across India.