Madison Media has just completed a multi-media innovation for its client Tata Salt on the occasion of World Iodine Day which was on October 21, 2018.¬†The innovation was built on the thought of the MissingI conceptualised by Tata Salt and their creative agency Ogilvy.

Madison Media got media partners across TV, print and digital to come together and make editorial changes to make the campaign a huge success. To highlight to consumers the importance of Iodine in their nutrition, the letter ‚ÄėI‚Äô was removed from editorial content and logos in leading newspapers, e-papers, TV news channels and social media.

13 is the average IQ difference between an¬†Iodine-deficient and¬†Iodine-sufficient¬†child. Iodine plays a huge role in the mental development of kids and yet very little is known about it. This led Tata Salt to come up with this unique campaign which involved a Teaser Campaign - ‚ÄúIs I missing from your body as well?‚ÄĚ and a Reveal - The missing I is Iodine and what it does. Iodine - the ‚ÄėI‚Äô that India needs. Let‚Äôs make India Iodine sufficient.

HT Masthead and copy Innovation: Hindustan Times recreated the Sports page on the back page with their mast head and removed the letter ‚ÄúI‚ÄĚ from the Masthead as well as the entire copy on the back page, with an ad inserted in the middle of the page that read¬†‚ÄúIs I missing from your body as well?‚ÄĚ. 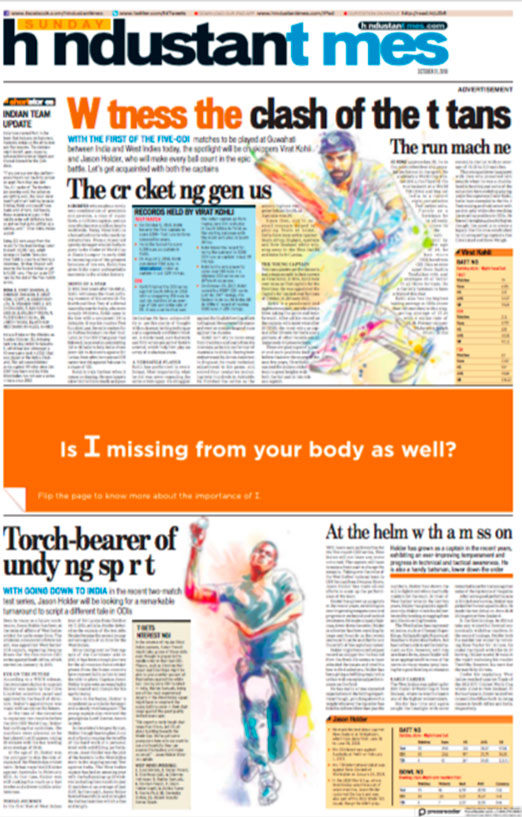 Republic TV: All Super headlines flashed throughout the day had the letter ‚ÄúI‚ÄĚ missing from the headline as well as the copy, with an ad inserted at the bottom of the screen that read ‚ÄúIs I missing from your body as well?‚ÄĚ Twitter #MissingI: Leading cricket personalities Harsha Bhogale and Gautam Gambhir, who enjoy a huge following on Twitter, put out 2 relevant tweets where the ‚ÄúI‚ÄĚ was missing. This started trending and other cricket enthusiasts also started putting out tweets without the ‚ÄúI‚ÄĚ. More than 3000 twitter users used the #MissingI, generating more than 24000 conversations, with a reach of 23.7 million and the #MissingI was trending for ~15 hrs. Sagar Boke, Marketing Head, Consumer Products Business, Tata Chemicals, said,¬†‚ÄúIn 1983, Tata Salt played a key role in the iodisation movement in the country by launching India‚Äôs first branded iodised salt. On Global Iodine Deficiency Day, we wanted to emphasise the importance of Iodine in daily diet, in an engaging manner. The "#MissingI" campaign communicated the health benefits of Iodine through innovative media touch points.¬† We are committed towards catalysing the nation free of Iodine deficiency disorders, and making India healthy.¬†Tata Salt‚Äôs genesis was in serving a national need, and we are proud that we continue to stay true to our motto of ‚ÄėDesh ki Sehat, Desh ka Namak‚Äô.‚ÄĚ

Vikram Sakhuja, Group CEO, Madison Media and OOH, said, ‚ÄúTata Salt has championed the cause of iodine deficiency for decades with its iodised salt, and its commitment towards Desh Ki Sehat with its ‚ÄėDesh Ka Namak‚Äô proposition. In its latest initiative this World Iodine day on Oct 21, ¬†the critical issue of¬† iodine deficiency has been raised through a multimedia campaign for #MissingI across Newspapers, TV, Online Display and Social. In this campaign consumers are exposed to text with the letter i missing, and then reminded to check if the ‚ÄúI‚ÄĚ is missing from their body too. It was exciting to execute this campaign across Media in record time.‚ÄĚ