Brands such as Max, Pantaloons and Greenply welcome the Mother with innovative campaigns ranging from heart-warming stories to social messages, and food and festivities 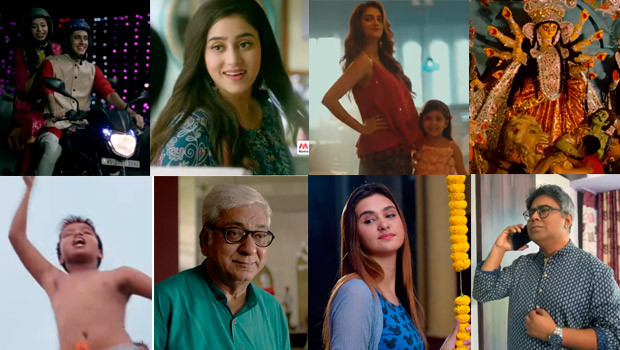 It is that time of the year again when people flock in groups to see their favourite Durga Pujo pandals with friends and families. Durga Pujo is one of the most auspicious and celebrated festivals in India. Though people from all religions celebrate the homecoming of goddess Durga but for Bengalis pujo is more of an emotion for them. Like every year, brands have come up with different and interesting campaigns to celebrate the festival. Some played safe by just promoting products, some crafted heart-warming stories, some came up with social message while another showed the importance of Rabindranath Tagore for Bengalis and not to forget about the whole pre-preparation of pujo and of course food.

For Bengalis, Durga pujo is about reuniting with families and friends. Pantaloons in its pujo special campaign shows the wonderful beginnings of new relationships during pujo. The film tells the story of Puchki and Sujoy da. Sujoy da is Puchki’s brother’s friend whom she likes secretly. During pujo shopping, Puchki is glad to see Sujoy da noticing her. They celebrate pujo together and also go for pandal hopping. Thus, it’s the beginning of a new relationship. The ad has gone viral on social media, garnering 4.3 million views on Facebook and another 2.8 million on Youtube.

Myntra celebrates the joy of giving during Durga Pujo and makes a potent fact about the delivery guys; they are also a part of the joy of giving. The film opens with a shot of an executive delivering packets at a house, much to the astonishment of the family members, who in a lighter vein mutter about Santa Claus arriving at their doorstep for Durga Pujo. The film then intensely captures the sentiment of the family members through their expressions as they unravel their gifts. The daughter of the family in the meantime is witnessing the emotions of her family, for it is she who ordered the gifts to surprise them. Her voice over also narrates the storyline of the ad and poses a question, “Who delivers all these moments of joy, the one who delivers or the one who placed the order?”

Max Fashion’s Durga Pujo special campaign takes the viewers through the different emotions that one feels pre-pujo. The ads star actors Jisshu Sengupta and Nusrat Jahan. The campaign revolves around the feeling of “Pujo toh eshei gyalo!” (Pujo is almost here!). The excitement of ‘Pujo’s almost here’ begins a couple of months prior. From contributing to parar pujo to deciding which dress to wear on which day, the couple enjoys every moment of it.

There is a saying in Bengali, “Bangalir baro mashe tero parbon (Bengalis have 13 festivals in 12 months.).” Brand Factory’s ad is an ode to Rabindranath Tagore, who is popularly known as Kobiguru Rabindranath ‘Thakur’ among Bengalis. The film starts with a scene of a family’s homecoming during pujo to Kolkata. The film takes the viewers to a tour of what Kolkata is famous for, be it Durga Pujo or Didi’s protest. It shows how everything has some relation with Tagore. So, this Pujo, Brand Factory celebrates not just Maa Durga but also Rabindranath Tagore as well.

Greenply has taken Durga Pujo campaigns a notch higher with its thought-provoking initiative aimed to make the celebration accessible for all. The video features four citizens who have been deprived of going out and soaking in the festivities due to physical limitations. These statements are followed by a message from Greenply which says that they have come up with the idea of a simple ramp made of plywood that will make the pandals a little more accessible, a little more wheelchair friendly.

To encourage more Pujo committees to follow in their footsteps, the brand is inviting them to upload pictures of their pandals on social media with the message: ‘Name of the Pujo’ needs a ramp accompanied by the hashtag #pujoforall. Greenply will promptly send their plywood to build a ramp for their pandal. Pujo committees that have already planned the construction of ramps can upload a photo of their premises with the message: ‘Name of Pujo’ has a ramp, accompanied by #pujoforall. Based on the information, a map with pamp-enabled pujos will be published as a social media post by Greenply. This will help people who’ve been unable to visit pandals.

Oh! Calcutta’s Durga Pujo film is all about the sweet and sour relationship that the members of pujo committee have. The film showcases the argument that erupted among the members over the menu of Ashtami. Some are for ‘khichdi’, while others want ‘pulao.’ The situation becomes tense but is cooled down by Oh! Calcutta’s food. After a delicious lunch, the members decide to have both khichdi and pulao on the menu.

Reliance Trends has given a touch of pujo to its already popular campaign, ‘Get them talking.’ The ad shows how the dressed-up woman is being stared at for dressing up before pujo. Some make negative comments while others laud her fashion.

Trends has also organised an impromptu fashion runway in the streets of Kolkata, which attracted many people who walked the longest fashion ramp.

Manyavar has upped the glam quotient through its Durga Pujo special films. The films showcase actors Abir Chatterjee and Mir Afsar Ali who are confused about which outfit to wear on which day during pujo. With ebar Pujoye #SokalBikelManyavar, the ads want the viewers to choose Manyavar on all the days of pujo.

Century Ply pays a tribute to the indomitable spirit and workmanship of carpenters without whose contribution Durga Pujo would not be possible. The carpenter community works relentlessly behind the scenes on any project to make sure that not only the tough deadlines are met but also the design aspirations find their expressions in their exquisite workmanship.

The film starts with a grim situation of the pujo getting cancelled due to lack of funds. All the members of the committee decide to not bring the goddess this year as there is no fund to pay for the idol. The carpenter, Pradip, whose son is ill, takes the responsibility of getting an idol. No one believes him as he doesn’t have the money for his son’s treatment, so how could he arrange for an idol. The film ends with a surprising moment when Pradip curves out goddess Durga on ply. Thus, the campaign celebrates the relentless effort of carpenters who work in silence.