Conceived by YAAP-Crayons Advertising, the film covers a wide array of tourist interests — golf, Brahmaputra river cruises and the majestic tea gardens. It promises to evoke interest among seasoned travellers who will be compelled to see Assam differently 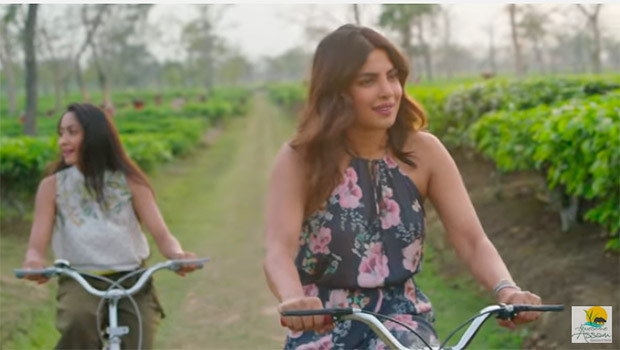 The 2017 campaign of Assam Tourism (ATDC) with Priyanka Chopra as the brand ambassador has received an overwhelming response. Building on the platform created last year, ATDC has launched its latest ad film starring Chopra.

The film conceived and produced by the YAAP-Crayons Advertising collaborative team has been shot at various locations in Assam. The narrative shows PC experiencing different aspects of Assam with her close friend.

“While we shot in Assam for almost 10 days, we had just two days with Priyanka in Assam and a lot to cover. We had to identify locations where crowd management was possible. We also had to keep track of the travel time from one location to the other. So I had to pen down a script keeping all these in mind. But what worked in our favour was PC’s professionalism. She had flown New York-Delhi-Jorhat. But without a hint of jet lag, she embraced Assam for the next three days,” said Rondeep Gogoi, ECD, Crayons Advertising.

“A successful 2017 film is always a tough act to follow. This film is about experiencing elements that go beyond nature and culture — it covers a wide array of tourist interests — such as golf, Brahmaputra river cruises and the majestic tea gardens. There has been a very positive trend in the growth of tourists in Assam. This film promises to evoke a lot more interest among the seasoned travellers who will be compelled to see Assam differently — through Priyanka’s eyes,” said Shouvik Roy, Senior Partner, YAAP.

The film has been directed by Lloyd Baptista, shot by cinematographer Sejal Shah and the producer is Anand Kumar of Fullmoon Productions. The stills for the campaign were shot by the Bollywood photographer Jatin Kampani at the shoot locations.