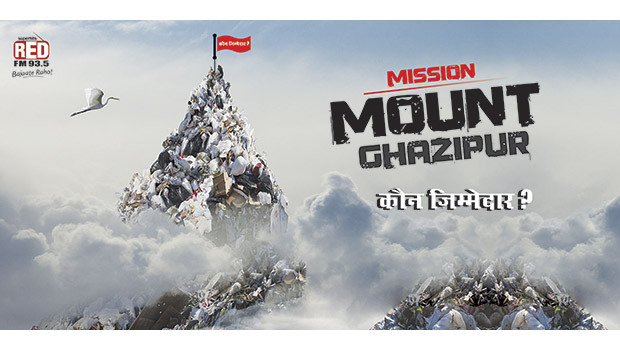 In an attempt to drive awareness and initiate action by authorities at Delhi’s biggest trash yard — Ghazipur in East Delhi — 93.5 Red FM has launched a campaign titled Mission #HillJaoge.

To draw eyeballs, drive awareness and provide respite to the growing nuisance of this neighbourhood and ensure the right authorities are reached, Delhi-based mountaineer Akash Jindal along with Red FM’s RJ Raunac aka Baua climbed the hill to conquer and capture the essence of #HillJaoge.

#HillJaoge is a pun in many forms — firstly, this hill will make you move with all the menace it comes with, secondly, this hill should go and give the area a much-needed cleaner hygienic environment. Red FM trekked up this garbage hill under Mission Mount Ghazipur campaign. The approach was that of climbing a genuine mountain, with gears and a base camp set up. A flag too was raised once the summit was conquered with ‘who is responsible’ written over it to question and provoke the citizens as well as the authorities.

Nisha Narayanan COO, Red FM, said, “At Red FM, we constantly look at ways to raise a voice and drive awareness for issues and challenges faced by our listeners in the cities. #HillJaoge is yet another disruptive initiative that will encourage the citizens to keep the city clean and hopefully not only get rid of the stench, but also get rid of this garbage hill at Ghazipur and all the hazards that comes with it. This initiative is a larger appeal to Delhiites. If at a grassroots level we begin to segregate dry and wet waste at home itself, that is half the problem solved.”

The garbage area in Ghazipur is a hill that no Delhiite is proud of. It was supposed to be any normal dump yard but because of the irregularities and blame game among the authorities, the trash yard has now grown taller and is almost the height of Qutub Minar.

According to government data, the garbage pile has become a hill that it has now reached 65 metres against the limit of 20 metres. This hill has become extremely hazardous for people who live near the area as it emits harmful methane gas, which causes serious irritation in eyes and breathing problems which ultimately damages the lungs. The situation gets even worse during the rainy season, when the stench grows stronger and leachate from the trash site enters adjacent canals.