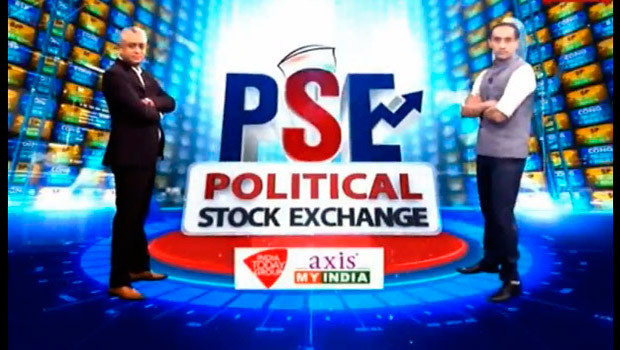 The show is a next generation innovation that will revolutionise election analysis.

The show is a report card of whose stock is soaring and whose graph is slipping and what are the issue of concern to the Indian voter.

The landmark show is designed to gauge political sentiments and present the real story to the viewers in a ‘matter of fact fashion’.

Leading up to the face-off between PM Narendra Modi and the opposition, Political Stock Exchange showcases actual data from the battleground by number crunching pollster Axis My India.

The maiden PSE survey found that the political stocks of Rajasthan chief minister Vasundhra Raje have dipped sharply while her BJP counterparts in Madhya Pradesh and Chhattisgarh still remain the popular choice to lead their states.

According to the survey of the three poll-bound states, as many as 48 percent of the respondents wanted a change of guard in Rajasthan, with only 32 percent expressing satisfaction with the incumbent Raje government.

Madhya Pradesh CM Shivraj Singh Chauhan emerged as the favourite of 46 per cent of voters while 32 per cent supported the Congress party's Jyotiraditya Scindia as the next chief minister of the state.

The Chhattisgarh PSE report showed 41 per cent of respondents favouring incumbent Raman Singh as the next CM while state Congress president Bhupesh Baghel got 21 per cent support.