Hoichoi eyes wider audience, to bring 100+ hours of original content in a year

The Bengali language OTT platform forays into Bangladesh and UAE to expand its reach among the Bengali viewers. It has also introduced features such as ‘Hoichoi top up card’ and ‘Pay per view’ 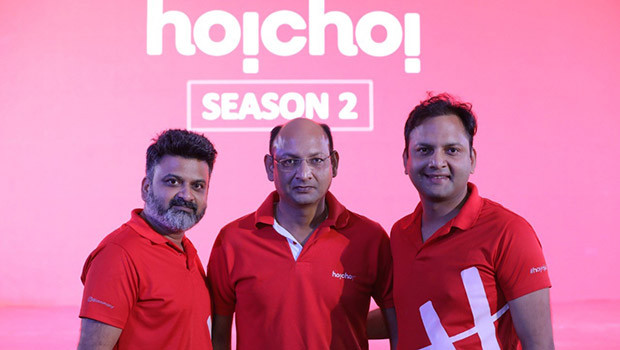 Having made its mark in the online video streaming space, Bengali OTT platform Hoichoi has announced its plans to expand its portfolio by launching 30 original shows and 12 original films — equivalent to 100 plus hours of content — in a year.

The platform, which is backed by SVF (formerly Shree Venkatesh Films) — will also double the overall content library to about 2,800 hours in the next one year by acquiring 200 Bengali movies, 12 of which will be world digital premieres.

The platform will offer the option of a Bengali app and website interface along with the existing English one. Some of the original shows will be dubbed in Hindi, Tamil, Telugu and Arabic.

In the first year of its launch, Hoichoi has streamed over 240 million minutes of content. With the new content, the viewers of Hoichoi will be spoilt for choice across genres, including fantasy, dark comedy, musical thriller, sitcom, travelogue, mystery, paranormal drama, kids, treasure hunt, psychological horror, detective erotica and others.

Vishnu Mohta, Co-Founder, Hoichoi, said, “We launched Hoichoi with the objective of making it the ultimate destination for Bengali entertainment and we believe we have taken great strides on our way to achieving it. Almost all the shows are loved by the audience and have become the reason for pop-culture references. The fact that the average time spent in-app for Hoichoi is 60 minutes per day per subscriber is extremely encouraging, which is way above the industry average.”

Mohta added, “We had also stated that Hoichoi wants to cater to the 250 million plus Bengalis living worldwide and expanding our footprint into Bangladesh and Middle East is an important step in that direction. These are markets with a potential of more than 180 million customers. While expansion into Bangladesh through local payment gateways is a natural decision to reach a wider audience, entry into the Middle East is aimed at connecting with the huge migrant Bengali population living in the Arabian Peninsula nations. We will soon launch ‘Dhaka Metro’, our first web series for the Bangladesh audience, which will be directed by Amitabh Reza Chaudhuri, Bangladesh’s award-winning director. We intend to keep delighting our audience worldwide.”

Mahendra Soni, Director and Co-Founder, Hoichoi, said, “At Hoichoi we try to keep a finger on the pulse of our audience. With almost 40% of our audience coming from non-urban areas, we decided to emulate the successful telecom model and introduce Hoichoi top up cards to make it convenient for our customers to subscribe. This offline payment mechanism is never heard of before in the OTT industry and will help us reach the masses in tier II and tier III cities. One can simply purchase the Hoichoi top up Cards available for subscribing to our three months, six months and 12 months plans from the nearest retailer and access the largest collection of the best in Bengali entertainment on Hoichoi without having to do any online financial transaction.”

Shrikant Mohta, Director and Co-Founder of Hoichoi, said, “At Hoichoi we have consciously taken a decision to adopt the AD-Free SVoD model because we want to provide the best uninterrupted entertainment experience to our audience. In yet another first in the Bengali entertainment space, we are now introducing the ‘Pay per view’ feature as part of the TVoD model. We will be releasing movies on Hoichoi approximately in just two weeks of their theatrical release and the viewers will have the option to pay for the content on a-la-carte basis.”