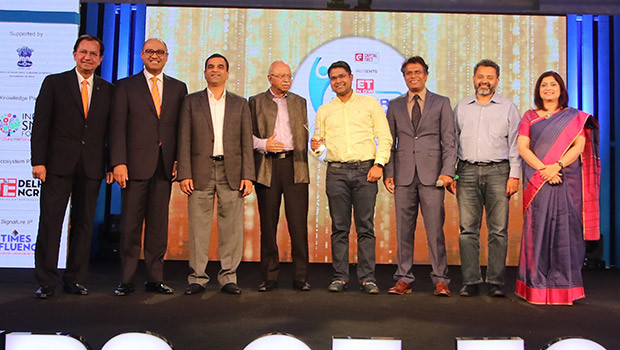 Clensta International has been named ‘SME of the Year’ at the Leaders of Tomorrow’ Conclave and Awards 2018. Priyanka Gill Founder and CEO, Luxeva India, was named 'Young Woman Entrepreneur’ of the year at the awards ceremony.

The seventh season of LOT Conclave and Awards 2018 was held in Mumbai and was hosted by ET Now. LOT showcases, empowers and recognises India’s most promising small business entrepreneurs (SMEs). The keynote address this year was delivered by Amitabh Kant, CEO, NITI-Aayog; theme address by V Vaidyanathan, Founder and Chairman, Capital First and the special address on ‘Right to Win’ was delivered by Harsh Mariwala, Founder and Chairman, Marico India.

The conclave was followed by the award ceremony. The winners were shortlisted after a month-long nomination process across nine categories. Pioneers from various industries were felicitated based on the criteria, including their display of sharp business prowess, clear understanding of the market and their deep focus on innovation and driving change. Clensta International won the ‘SME of the Year Award’, following the elevator pitch made to the jury comprising MK Anand, MD and CEO, Times Network; Suresh Narayanan, Chairman and CEO, Nestle India; Madhusudan Kela, Market Veteran and Founder, MK Ventures; Pradeep Parameswaran, President, Uber India and SA; Sam Subramaniam, CEO, Brand Capital; Debrati Sen, MD, 3M India and Sri Lanka and Saurabh Srivastava, Co-Founder and Chairman, Indian Angel Network.

M K Anand said, “Leaders of Tomorrow Conclave and Awards in its seventh season salutes the spirit of SME leaders who are actively contributing to India’s growth. We are proud to provide a platform that honours and celebrates their determination and passion to bring alive ideas and, in the process, create inspiring stories for budding entrepreneurs. Embodying ET Now’s ethos ‘Rise with India’, I firmly believe that India’s most coveted platform for SMEs, will inspire new stories of entrepreneurial success that contributes to India’s growth.”

Delivering the keynote address, Amitabh Kant, CEO, NITI-Aayog, said, “MSMEs contribute close to around 45-50% manufacturing, exports and jobs. The two imperatives of growth and jobs, both which are critical for India, come from the MSME sector. We have done away with a lot of rules, regulations and procedures that were prevalent over the past 70 years so that it becomes easier for MSMEs to do business. That is the reason why we have jumped up 42 positions in the World Bank’s Ease of Doing Business Global Ranking."

"The future of SME and MSMEs lies in digitisation. Digitisation and formalisation will be the crux which will throw up a huge amount of data, leading to financial inclusion. 98.3% Indians pay income tax online, which is result of the government shifting to digitisation and technology, which will prove to be a huge asset in the way MSMEs do business. India’s economy has got formalised thanks to the GST. In one year of GST, we have 47 lakh new formal enterprises in India. Unlike any other country, the Ayushman Bharat scheme launched by the Prime Minister will link up 150,000 primary health centres to the district health centres which will enable 42% of India’s population to have access to medical insurance of about five lakh rupees. All MSMEs must be part of the global supply chain and must lead with design and innovation for the future. My belief is that the future of India lies in the hands of the MSMEs and we need to create the right ecosystem, for India’s economy to grow at 9-10%," he added. Tags: Clensta International SME of the Year Leaders of Tomorrow’ Conclave and Awards 2018
Advertisment
More from this section