The brand has announced its new brand positioning ‘Car bechni ho, toh Cars24’ with the launch of a new campaign 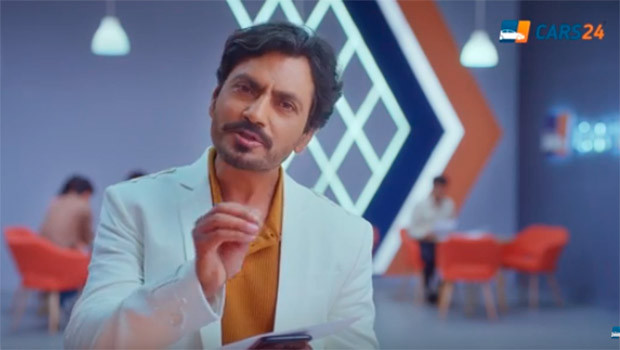 With an aim to triple its business in three months, Cars24 has undergone a brand repositioning exercise. It has launched a new campaign based on its new positioning, “Car bechni ho, toh Cars24”.

There are four ad films in the campaign, two of which feature Bollywood stars Nawazuddin Siddiqui and Mandira Bedi.

Also read: Not just digital, all mediums play a role in growth of content, says Devendra Deshpande of Mindshare

The company has roped in Hypersonic Advisory to craft the relaunch strategy and execute it end to end.

In one ad film, Siddiqui is looking to sell his first car, a small car that he calls "his partner in his long years of struggle in the industry before he became the big star that he is today". His neighbour suggests gifting the car to him as he doesn't need the money anymore. But he doesn't like the idea of disrespecting his car by giving it away. He decides to try Cars24, where he gets the price and respect his car deserved.

In the second ad film, Bedi chooses to sell on Cars24, on the basis of a friend’s recommendation and after being pestered by people who respond to her ad about selling her car.

Another commercial showcases the story of a man still doing the rounds of courts as he sold his car to someone who committed crimes using the first owner’s car but went scot-free because the car was still in the name of the original owner. Thus, drawing attention to the importance of getting done with paperwork on time, which Cars24 helps.

“Cars24 has been around for a while but we realised that there were multiple reasons why we had such a wide fan base. A very large number of our branch walk-ins were from referrals from other happy consumers who had earlier sold a car at Cars24. We realised it’s time we move from a single benefit proposition to appropriating the category of used cars. The latest campaign establishes Cars24 as the clear dominant leader in the segment, and re-positions all other methods of selling your used car as tedious, harrowing and unreliable,” said Vikram Chopra, CEO, Cars24.

“Cars24 had a simple brief. To triple business by festive. It was a tall ask and we could have resorted to short-term tactical promotions. But we chose to relaunch the brand with a proposition that would set them up for the long term. This is a category that suffers most from a trust deficit. With this relaunch, we have attempted to help Cars24 appropriate the position they truly deserve – that of being the undisputed category leaders. We went through a rigorous process of iterative consumer tests, arrived at a new campaign idea delivered via Testimonials. We partnered to select the right celebrities and service partners. It's been an absolute joy, we can't wait to see the transformational impact of this relaunch for C24 and for the industry at large," said Vani Gupta, Co-Founder and Partner Hypersonic Advisory.