The brand launched over 150 OOH ads to spread its wings in the city. The surprise element at the airport, the countdown billboard, and geo-targeting with mobile made the campaign highly recallable among advertisers and consumers 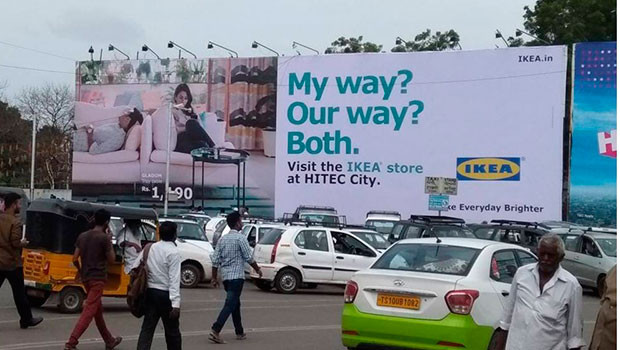 Ikea, a Swedish furniture brand, launched over 150 OOH advertisements across Hyderabad in partnership with Kinetic.

Ikea, which started its India journey with its first store in Hyderabad on August 9, also used a billboard as a countdown for its launch.

The billboards and posters were seen on metro train, digital cabs’ branding that display location-specific customised messages, highways, airport, bus stops and most of the important junctions.

Street furniture played a key role in increasing the frequency and was supported with large facades in malls.

Charanjeet Singh Arora, Kinetic, Co-CEO, said, “Kinetic and Mindshare are happy to be the agency for Ikea. The campaign became one of the most talked about on social media, where the people expressed their excitement. Though there was a ban on large format media while we were nearing the execution stage, our team was successfully able to change and implement the campaign strategy within 48 hours.”

Rajeeb Bhattacharya, VP, South and East, Kinetic, “We showcased how life can be made bigger, better and happier with Ikea homes in the streets of Hyderabad. Needless to say, the canvas of the city got wrapped with Ikea branding, and was among the most visible campaigns. The surprise element at the airport, the countdown billboard, and geo-targeting with mobile made the campaign highly recallable among advertisers and consumers.”

The talking point of the campaign was the countdown timer on a bus stop along with AC and non-AC bus shelters, showcasing the idea to ‘reimagine spaces’. The brand’s arrival was announced at the airport where the flatpacks came out of an illuminated arch gateway set up at conveyer belts.

Anisha Agarwal, External Communications Manager, Ikea India, said, “We are a brand for the many and it was important for us to engage Hyderabad people at multiple touchpoints from their everyday life. From regular billboards to out-of-the-box innovations, we tried to create curiosity and engagement at every step. It indeed helped us build the right momentum and got us many steps closer to being a loved and meaningful brand for our customers. Partnering with Mindshare has been a true delight and we are sure that we will strengthen this relationship further as Ikea spreads its wings in India.”