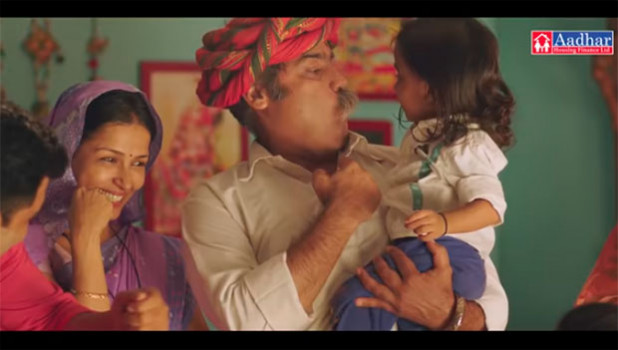 In Indian culture, owning a house is one of the most significant indicators of financial wellbeing, prosperity and economic security. Highlighting this insight is Aadhar Housing Finance’s latest brand campaign called #GharBanegaTohDeshBanega. The new digital campaign advocates the brand’s vision of enabling home ownership for every Indian across the nation.

Created by Hypercollective, the campaign is crafted on the insight that the prosperity of a nation depends on the prosperity of its people. The ad film intends to drive awareness about the importance of owning a home.

The film is a musical that captures the joy of different families owning a home and conveys that a house offers comfort and security. It portrays the sentimental value derived from being under one’s own roof. The lyrics of the song represents the brand’s focus to enable home ownership for all to create an equitable society and a better world.

“At the core of Aadhar Housing Finance is the mission to empower people who have always dreamt of owning a house but don’t have the sufficient means to achieve it. If you’re helping individuals build a house of their own, you’re building their lives but when you help millions to build homes, you’re helping build the nation and that is something Aadhar wanted to communicate as a brand that is driving transformation across India,” said Deo Shankar Tripathi, MD & CEO of Aadhar Housing Finance.

In addition to the digital ad film, the campaign has been rolled out across media channels, including social media, print and outdoor in the cities of Mumbai, Delhi, Noida, Gurgaon, Ahmedabad, Surat, Chennai and Hyderabad. The campaign is being primarily manifested through multi-lingual film in Hindi, Tamil and Telugu.