With Shekhar Gupta at the helm of the Editors Guild as its President, the Guild did not investigate into the matter and largely went by Bajpai’s narrative to complete the formality to issue a statement in a standard format lacking the courage and inability to address the issues and to name the parties directly 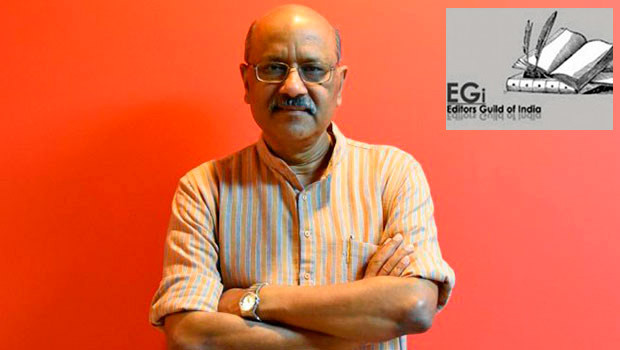 In the backdrop of two high-profile exits from ABP News recently and Barkha Dutt’s exit from NDTV last year, both allegedly under political pressure, the Editors Guild of India has come out with a subtle condemnation without naming the channels, journalists and Prime Minister Narendra Modi or his government.

It may be recalled that ABP News’ Editor-in-Chief Milind Khandekar and Anchor of primetime news show ‘Masterstroke’ Punya Prasun Bajpai had put in their papers earlier this month. While Khandekar has not revealed the reason behind his exit so far, The Wire published a letter written by Bajpai, which alleged political pressure behind his resignation.

On the other hand, Barkha Dutt has been hinting using various platforms that political pressure was the reason behind her exit from NDTV.

In a statement titled ‘increasingly challenging environment for freedom of the press’, the Editors Guild highlighted that the media owners were succumbing to political pressure after Bajpai alleged in his article that his employer had approached him to not take Modi’s name or use his picture in his show.

The Guild also condemned the alleged recent instances where signals of television programmes critical of the government have seemingly been blocked on the basis of some screenshots shown to them. However, the screenshots alone do not prove or establish interference given the disturbance in signals across the day and on select distribution platforms. It may be noted that the signals were intact on government-owned and largest platform DD Freedish. In fact, the viewership of ABP News remained stable or grew over the period despite the alleged blockade of signals.

The Guild did not take cognisance of another allegation by Bajpai that advertisers had pulled off from his show under government’s pressure. According to the data sourced by BestMediaInfo.com, Zee News had resorted to reduce the ad breaks during Week 25-26 to increase the stickiness and hence viewership, which was followed by all the other Hindi news channels. The drop in ad duration in Week 27-28 vs previous 4 weeks (Week 23-26) was 38% on ABP News, 18% on Aaj Tak, 17% on India News and 18% on India TV.

With Shekhar Gupta, Founder and Editor-in-chief, ThePrint, at the helm of the Editors Guild as its President, the Guild did not investigate the matter and largely went by Bajpai’s narrative to complete the formality to issue a statement in a standard format, lacking the courage and inability to address the issues and name the parties directly.

The Editors Guild of India condemns the manner in which the right to practise free and independent journalism is seen to be undermined by a combination of forces – some media owners' inability to withstand political covert or overt pressures from the political establishment and frequent instances of blocking or interference in the transmission of television content that is seen to be critical of the government.

The past few days have seen senior journalists of at least two electronic media channels come out in the open to assert that their employers attempted to either tailor or tone down their content to make it less critical of the government, leaving them no choice other than resigning. At least one such instance has been reported formally in writing to the Guild. These instances are disconcerting.

The Guild decries all attempts on the part of the government to interfere in the free and independent functioning of journalists, either put under pressure directly, or through the proprietors. It also reminds media owners that institutional strength and respect is directly linked to editorial independence and undermining the former can result in curtailing the latter. It urges them to not cow down to political pressure being brought upon them by the government or any other forces. Owners and journalists have an equally shared interest in press freedoms and in resisting pressures.

Even more worrying are the recent instances where signals of television programmes critical of the government have seemingly been blocked or disrupted in a manner almost Orwellian. One TV channel has also shared with the Guild screen-shots and details indicating such interference. Such attempts strike at the root of media freedom and indeed the foundations of our democracy. These undermine the right to be informed and to hold the establishment accountable. This seems a brazen attempt to punish "unfriendly" news channels and silence inconvenient voices.

The Guild demands that the government take note of these instances of disruptions in television programme signals, investigate and explain how and under what circumstances these egregious violations are taking place. Suitable action must be taken against those who were responsible for such nefarious activities aimed at throttling media freedom. It must also assure the nation that either directly or through any proxies or agencies it isn't involved in this activity. And if it isn't, these saboteurs must be brought to book. Freedom of airwaves cannot be tampered with.

[2] The Guild also decries the tendency on the part of the government, and the political class in general, to use selective denial of journalistic access as a weapon. This has become worse when there are few opportunities to ask questions to those in public life or in official positions on public platforms like press conferences, which is a legitimate democratic right of journalists on behalf of all citizens. Denying this right and shunning journalists critical of you are unhealthy practices in a democracy. Unfortunately, it can also lead to one-sided coverage. This unhealthy and unfair practice must be avoided.

[3] In a related issue, the Guild decries the "cease and desist" notice served by a large corporate group on some newspapers in an effort to block the coverage of an important Defence deal. The company should withdraw this notice. And if it doesn't, it should be resisted and if needed, we hope the courts will weigh in for the right of journalists to investigate and raise questions.

[4] The Editors Guild of India is also pained and agitated to learn of the detention of Shahidul Alam, eminent photographer and educator, in Dhaka under the provisions of the Information and Communication Technology Act of Bangladesh. The Guild understands that Mr Alam's detention is arbitrary and unreasonable. Highlighting the peaceful protests by school children and young people in Dhaka against the malpractices in the transport sector, resulting in deaths, is not a crime. The Guild stands behind Mr Alam and demands his immediate and unconditional release from detention.