‘India’s Citizen Squad’ is about the search for those citizens who want to change India for the better. It will premiere on Discovery Channel, Discovery World HD and on Veer by Discovery, a dedicated military channel available on YouTube, in November 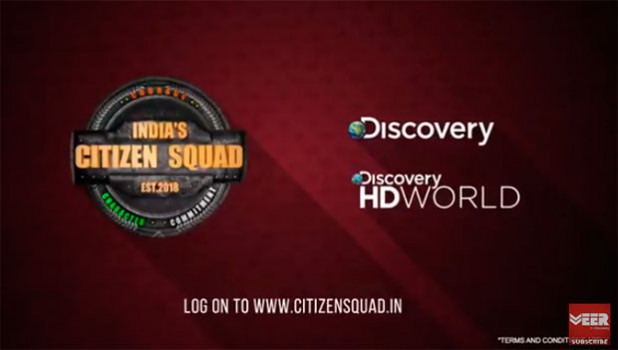 The show will premiere on Discovery Channel, Discovery World HD and on Veer by Discovery, a dedicated military channel available on YouTube.

Guided by former military specialists, India’s Citizen Squad, comprising 10 ordinary citizens, will undergo ultimate endurance boot camp – a series of intense physical and mental challenges pushing the limits of their body and mind. This is not a typical elimination-driven reality show; it is a test against self to see if the mind has the will and strength to push the body to complete the challenges. The chosen India’s Citizen Squad will have to accomplish a new daredevil mission in each episode of the show.

“There are citizens who have the courage and the strength to take a stand for what is right. Those who don’t, want to be another dim face in a silent crowd. We are looking for such heroes. The aim is to train them and make them stronger physically, mentally so that they become the change agents of the society. We need to be the change, to make the change,” said, Zulfia Waris, Vice-President, Premium and Digital Networks, Discovery Communications India. “This is a golden opportunity for millions of Indians who aspire to emulate military values in everyday life and change India for the better. I am confident that we will get a positive response from across the country.”

Major Vivek Jacob (retired), Para (Special Forces), Indian Army, who will play a key role in training India’s Citizen Squad, said, “Special Forces is about focus, grit, will, intelligence, balance, strength, endurance and a whole lot of heart. The ability to bring all of that together and focus it on one point – your dream. To choose, focus, walk and achieve what most people don’t even dare to dream about. We are going to test you – physically, emotionally and mentally to see if you’ve got what it takes to get through a week of what we do over a lifetime.”