For the last two days, a news story on Republic TV’s Editor-in-Chief Arnab Goswami has been flooding social media and regional news media. He has been accused of calling Keralites 'shameless people' during one of his debates. The channel claims that Goswami is a victim of fake news as he exposed the malicious agenda of a particular group of people. BestMediaInfo.com finds out how much water do these allegations hold 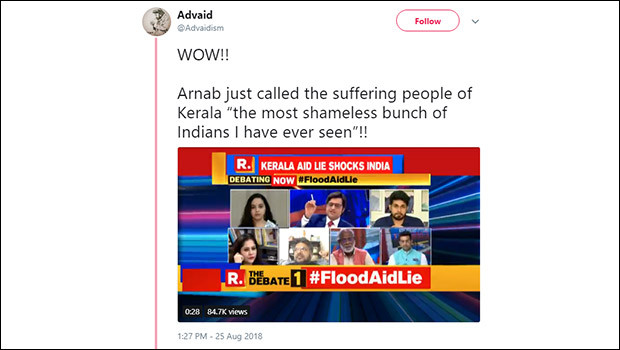 A relentless campaign on social media and various news websites alleges that star anchor Arnab Goswami called the victims of the Kerala flood “shameless” during a debate on Republic TV.

BestMediaInfo.com did a reality check and verified that contrary to the narrative being pushed online, Goswami in his 9pm debate dated August 24, 2018, called those who were exploiting the Kerala flood calamity to spread the fake news about the UAE government officially pledging Rs 700 crore flood aid “shameless”.

Republic TV claims that the malicious campaign was run online by people with vested interest. “The fact is that there isn’t an iota of evidence to corroborate the claim,” the channel told BestMediaInfo.com in an official communication.

How the controversy rolled out and who started it

Almost immediately after the debate, hashtags attacking Goswami like #OMKVArnab and #ShamelessMalayali were floated on social media to besmirch the image and credibility of the news channel and its anchor.

Even a cursory fact check or a simple hearing of the clip being circulated on social media would reveal the truth about Goswami’s opinion of the Kerala calamity and his empathy vis-a-vis the victims.

The news story can be traced to the Twitter handle “@Advaidism”, which was one of the first accounts to post the clip. Since the tweet below, the user has published multiple additional tweets on the issue.

Arnab just called the suffering people of Kerala “the most shameless bunch of Indians I have ever seen”!! pic.twitter.com/UgErqqPyCj

In the clip posted, Arnab Goswami, clearly referring to the group of individuals using the Kerala flood to spread fake news, says, “This group is shameless, it's the most shameless bunch of Indians I have ever seen, they have gone around spreading the lie religiously. I don't know, what they get for it? Whether they get paid for it? Do they get money for abusing their own country? Are they part of a group? Who are they funded by? Point is it is a conspiracy to malign India?” (sic.)

Bereft of facts, an army of trollers and social media users have used the clip to suggest that Goswami was branding Keralites as “the most shameless bunch of Indians”.

Moments after what seems like the first fake news tweet emerged, there was an almost immediate virality with almost 2,000 retweets. Even verified Twitter handles like “@cjwerleman” pushed the narrative that Goswami called Keralites the “most shameless bunch of Indians” without a verification of the facts.

India: Arnab Cowswamy, unofficial spokesman of the sanghis (RSS), calls victims of Kerala floods "the most shameless bunch of Indians I have ever seen."

In fact, in the same debate, Goswami also said, “When the people of Kerala have been so physically vulnerable, because Renjith (Keshav), the people of Kerala have been so psychologically resilient, you know, and I come from Assam which has been a flood ravaged state myself, and I can therefore empathise the people of Kerala are psychologically resilient. They have shown how great they are as people, how strong they are, and I am only saying at this point of time that somebody is using fake news to manipulate them. Manipulating people at the time of tragedy is cheap.” (sic.)

As problematically as the fake news spreading on social media, certain national and reputed regional online news portals as well as regional broadcast news channels started airing the story without verification of the facts.

In fact, despite prominent personalities tweeting the facts on the real story, the social media handles spreading the news continued to do so unabated.

Notably, one of the panelists from The Debate on the same night of the clip being circulated, personally clarified on Twitter and Facebook through multiple posts that Goswami at no point insulted the people of Kerala. No cross verification with Republic TV

The channel told BestMediaInfo.com that none of the platforms cross verified the clip portion and instead went hammer and tongs spreading the narrative.

“There was no attempt to cross verify the news story or get an on-record version from Republic TV. We dedicated a large chunk of all-day and primetime slots to aid the Kerala flood aid victims. Contrary to the vilification he is facing, Goswami was among the first primetime anchors to change his usual debate format to dedicate an hour-long show aiding the rescue operations. The channel had even set up a WhatsApp number and dedicated all its online assets to connect thousands of stranded victims of the Kerala and Kodagu floods with the NDRF and the Forces, so as to aid the rescue operations,” Republic TV told BestMediaInfo.com.