Harpic brings Akshay Kumar on board as brand ambassador

The association with the ‘Toilet Ek Premkatha’ star, who is also the face of the government’s ‘Swachh Bharat Abhiyaan’, will spin a holistic, multi-touchpoint campaign 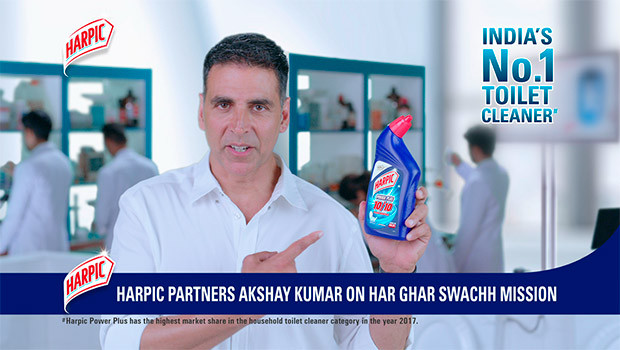 Everyone remembers actors Hussain Kuwajerwala and Vishal Malhotra for their stint as Harpic’s toilet evangelists. If someone were to force their way into your toilet, challenging your toilet hygiene, it would be either of the two Harpic guys.

Now casting its net wider, Harpic has decided to leverage the immense popularity of Akshay Kumar’s new pro-establishment image and signed the ‘Toilet Ek Premkatha’ star, who is also the face of the government’s ‘Swachh Bharat Abhiyaan’, as its brand ambassador.

Harpic and Kumar’s association is intended to drive the brand’s new mission of ‘Har Ghar Swachh’. Through the drive, the Harpic aims to provide universal access to clean toilets to each and every Indian and emphasise on the importance of maintaining a clean toilet.

The association with Kumar will spin a multi-touchpoint campaign that brings to life Harpic’s superiority as a specialist toilet cleaner.

Sukhleen Aneja, CMO, Marketing Director, South Asia RB Hygiene Home, said, “Harpic has been an expert in toilet cleaning for over 30 years now and has undertaken several initiatives to drive behaviour change towards driving transversal access to sanitation. Realising the need for educating consumers on the usage and maintenance of toilet, Harpic through its mission of ‘Har Ghar Swachh’ aims to sensitise people about basic cleaning habits and ensure that every Indian household has access to clean toilets. Professionally and personally, Akshay has been a key influencer to drive the sanitation mission and it’s an honour to have him as Harpic’s brand advocate to amplify our mission. Harpic stands for expertise, trust, reliability and positive social change – values true to Akshay and thus, the partnership between Harpic and Akshay is a natural extension of these values. With Akshay as the perfect evangelist, Harpic will continue to driving this positive social change.”