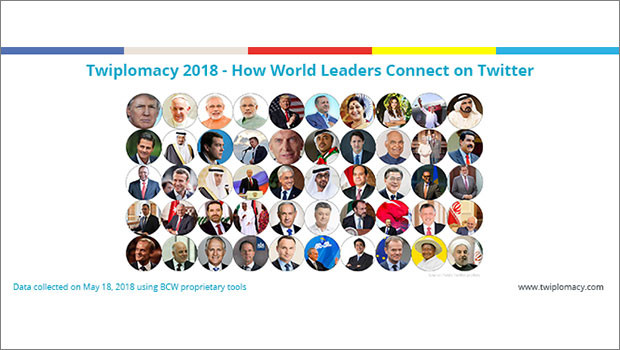 US President Donald Trump is the most followed world leader on Twitter, with 52 million followers on his @realDonaldTrump account, says the newly released 2018 Twiplomacy study by BCW, the integrated global communications agency. The followers have more than doubled ever since he assumed office on January 20, 2017.

The Twiplomacy study is BCW’s highly-acclaimed research into how world leaders, governments and international organisations communicate via social media.

Facebook is the second-most popular network among government leaders, and it is where they have the biggest audience. Instagram has become the third-most popular social network for governments with 81 % of all UN member states having set up an account and many of them are sharing daily Instagram stories.

The BCW Twiplomacy study analyses the activity of 951 Twitter accounts of heads of state and government and foreign ministers from May 19, 2017 to May 18, 2018 using aggregate data from Crowdtangle.com.

“Social media has become a primary conduit of diplomacy,” said Chad Latz, Chief Innovation Officer, BCW. “It has gone from being an afterthought to the very first thought of world leaders and governments across the globe, as audiences flock to their Twitter newsfeeds for the latest news and statements. Beyond communicating their own agendas and policy decisions, it is interesting to see how they use Twitter to establish relations or challenge each other on full display to the social web.”

For the past three years, the EU External Action Service (@EU_eeas) has been the best-connected foreign office, mutually following 132 foreign ministries and world leaders. The UK @ForeignOffice has moved into second place with 130 mutual connections, overtaking the Russian Foreign Ministry @MFA_Russia with 126 mutual connections. The Twitter accounts of the @WhiteHouse and @POTUS are the two most popular among their peers, followed by 290 and 250 world leaders, respectively.

Other key findings include:

*Latin American governments are by far among the most active on Twitter. Venezuela’s Foreign Ministry (@CancilleriaVE) is the most prolific government account, posting 55 tweets each day on average over the past 12 months followed by the Presidencies of El Salvador (@GobSV_Comunica) and the Dominican Republic @PresidenciaRD.

*Kenya’s Uhuru Kenyatta @UKenyatta is Sub-Saharan Africa’s most followed leader with 3 million followers, ahead of Rwanda’s @PaulKagame and Nigerian President Muhammadu Buhari (@MBuhari) with more than 1 million followers each.

*The institutional account of the UK Prime Minister, @10DowningStreet, is the most followed EU leader, with more than 5 million followers, ahead of the British @RoyalFamily and French President Emmanuel Macron, with more than 3 million followers, respectively. @EmmanuelMacron has almost tripled his followers since his election in May 2017 and he has surpassed the @Elysee Palace and Spanish Prime Minister @MarianoRajoy who complete the top-five list of the most followed EU leaders.

*Jordan’s @QueenRania has become the most followed Arab leader with more than 10 million followers, surpassing Sheikh Mohammed, the Vice-President and Prime Minister of the United Arab Emirates @HHShkMohd and Saudi Arabia’s @KingSalman with nine and six million followers, respectively.

*Among the foreign ministries, the U.S. State Department (@StateDept) is the most followed, with 5 million followers, ahead of the Foreign Ministry of Saudi Arabia (@KSAMOFA) which has shot into second position with more than 2 million followers.

*The Dutch government is the most conversational on its @Rijksoverheid account, answering citizens’ questions about policies, laws and regulations. More than 97% of its tweets are @replies to other Twitter users. The @GOVUK channel is in second position followed by the government of Nepal’s “Hello Government” (@Hello_Sarkar) account, with 95 and 90 % of their tweets being @replies answering questions from users.