Disclaimers in ads: The art of conning consumers

Why do brands go for small and negligibly visible fonts in disclaimers even when they know ASCI’s rules? Do brands shy away from providing full details about their products in a transparent manner? A BestMediaInfo analysis 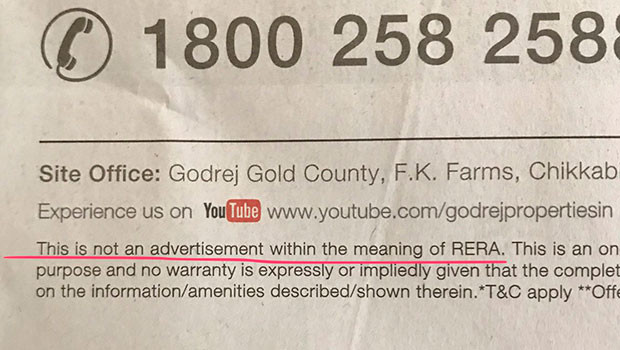 Just before IPL11, Airtel ran advertisements across platforms claiming to give free access to T20 matches on Hotstar. The Mukesh Ambani-owned arch-rival Reliance JIO objected to the Airtel ad and went to the Delhi High Court claiming that Airtel’s commercials were “deceptive and misleading”.

The Delhi High Court later asked Airtel to carry a disclaimer in a larger font size than earlier, stating that under its ‘live and free access’ offer, only subscription to video streaming platform Hotstar would be free and data charges according to subscribers’ plan would apply. A 4-5 line disclaimer was added to the ads.

But what is the use of such a disclaimer after the ad has run without it for a couple of months already? Why is the font of most of the disclaimers across brands too small to read? Why is it that these disclaimers are flashed on the screen for such a short duration that it doesn’t just get registered with the consumers? These are the questions that both admen and consumers are asking.

BestMediaInfo analyses why brands go for such small fonts in disclaimers when they know Advertising Standards Council of India’s (ASCI) rules and the steps that the industry could take to put a full stop on this red herring.

According to Shweta Purandare, General Secretary, ASCI, “‘Supers’ should be clearly visible and should be held long enough (in TV ads) for the full message to be read by an average viewer on a standard domestic TV set. Therefore, following minimum size of lettering of ‘Supers’ and its holding time on screen for TV advertisements is mandatory.”

“People tend to believe they can imitate stunts shown in two-wheeler ads, so in order to avoid encouraging people to do stunts, a motorcycle company may put disclaimers mentioning the professional stuntmen. Anything that shows speed manoeuvrability and even stunts or actions, requiring professional driving skills in normal traffic conditions, in any case should carry a readable cautionary message drawing the viewer’s attention to the depiction of stunts,” said K V Sridhar, Founder and Chief Creative Officer, Hyper Collective.

In many ad films, advertisers make false statements about the mileage of the vehicles, or skin fairness, anti-ageing and many other things that mislead the consumers. While doing this actively in the ad film, a micro-level disclaimer at the corner of the screen mentions the ‘real’ claims of the company, which often go unnoticed. “There are certain ads that make some serious claims (in certain circumstances), like for example it gives you 80 kilometres to a litre.But 80 kilometres to a litre could be on a road sans bumps and potholes, but if you run it in Mumbai it will give you 60 kilometres. So anything that you are presenting, but not totally a fact– you're just making a case out of something–does require a disclaimer,” said Jagdish Acharya, Founder-Creative Head, Cut The Crap.

“Yes, the disclaimer must be prominent. This problem is more in print media and less in TV or radio, which has dedicated secondages for the disclaimer. In print or POP, the point size is not sufficient,” said Shivaji Dasgupta, Founder, Inexgro Brand Advisory.

Often, these disclaimers are not included by choice but because the government mandates them. As it turns out, a growing body of research finds that many disclaimers are useless or even worse; they actually mislead consumers into making inferior decisions.

“The fact is that the public now knows that none of these things are true, so to that extent it’s not actually making fool out of people. However, in some specific categories like education and medicine/ pharmaceutical/ healthcare, disclaimers are of utmost importance as claims can be highly misleading. The ASCI bans the maximum number of ads from these two industries. The third crucial sector could be financial advertising, but the rules are more stringent in financial advertising. Disclaimers are placed in such a manner that they don’t harm the creative output, and are placed largely to satisfy legal requirements. If given a choice, none of the brands will put any disclaimers,” said Acharya.

No matter how many times the ad is being displayed, the consumers are not able to read the disclaimers and this sometimes misleads them. The recent Bharti Airtel example testifies this. Standard Chartered Bank claimed of “upto 10% extra cash back” on all spends with the Standard Chartered credit card but it didn’t mention that the cash back was limited to Rs 10,000 only.

A complaint was lodged against Tata Teleservices’ Tata DoCoMo that the ad had disclaimers/ written information on the screen but in a very small, illegible and unreadable font. This ad was noticed on TV; it apparently violates the ASCI code and does not appear to be entirely honest in its manner of communication. The CCC viewed the TVC and concluded the disclaimers/Supers in the TVC, and the content/ text shown in the last frame of the TVC were not legible. The CCC concluded that the ad contravened the ASCI guidelines on Supers.

“When ASCI rulings say that this ad is wrong and this needs to get changed, most often those ads can run with the disclaimers. But if it is about not fooling the consumers, then the disclaimers are not enough. Disclaimers are a pseudo-satisfaction that ‘I am saying, I am also saying I don't mean this. Hence, I mean something else.’ It is a way of escaping,” said Acharya.

Tags: Disclaimers in ads The art of conning consumers
Advertisment
More from this section