The upcoming season hosted by actress Priyaraman will be telecast every Sunday at 2.30pm. Celebrities and commoners will go through four challenging rounds, the key of each being genetic resemblance 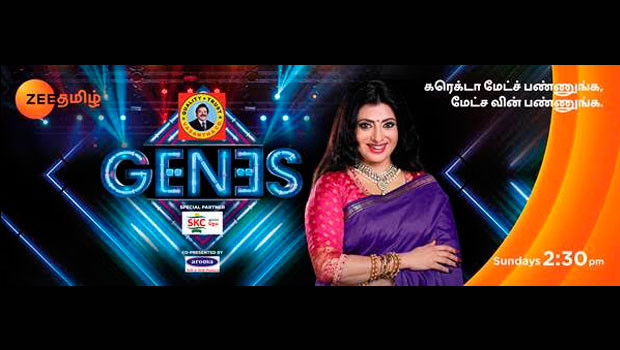 Zee Tamil has announced the launch of the third season of the game show ‘Genes’, which has been given a refreshed and rejuvenated look with its new host Priyaraman. The show was telecast on Sunday, June 17, at 2.30 pm.

The show will witness popular celebrities and commoners as participants, where they will go through four challenging rounds, the key of each round being genetic resemblance. The participants will be presented with a cash prize of Rs 50,000 at the beginning of round one, which would either get deducted or multiplied based on the performance of the participants in each level.

A channel spokesperson said, “The success of Genes over the last two seasons lies in the uniqueness of the show format which fans of entertainment can enjoy at the comfort of their homes. With the versatile Priya Raman, a popular household name as the new host, we are confident that the show is going to reach greater heights and create a revolution among game shows in the Tamil television market.”

The first round will be ‘Onnu Onnu Moonu’, where participants will be asked to match the right pair of parents and children. The second round ‘Yaaru Intha Star’ involves participants going through four categories and recognising famous personalities in their childhood avatars. In ‘Anniyan’, round three, the participants will be shown a family photograph from which they will have to find the outsider, i.e. the odd one out. The final round comprises participants matching five children with their parents.