Created in-house, the campaign consists of three ad films that highlight the iconic elements that make movies memorable and the key strategy is to appeal to both urban and rural audiences 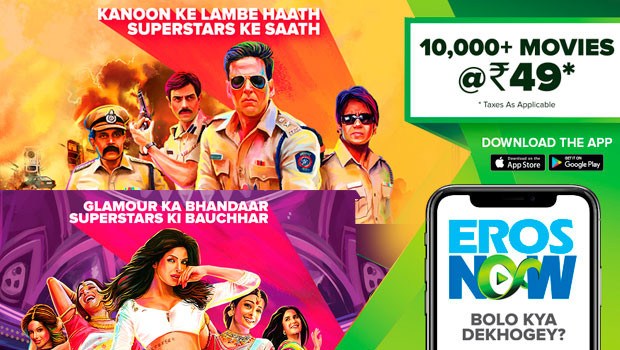 Commenting on the thought behind the campaign, Ali Hussein, COO, Eros Digital, said, “Movies are an intrinsic part of every Indian and Eros Now has the largest and the most diversified library of Indian films across languages. The brand campaign is our attempt to be able to showcase to the digital viewer the options available from a depth of 10,000+ movies at a very reasonable monthly price.”

The first TVC ‘Horses and Vehicles’ perfectly sums up the width and depth of Eros Now’s movie library, with the presence of stars like Salman Khan, Deepika Padukone, Ranveer Singh, Mithun Chakraborty, Varun Dhawan, John Abraham and R Madhavan. The TVC establishes that even if the viewers fall short of personal choices, Eros Now will still have something to offer and entertain them.

According to Hussein, the primary objective of the campaign is to lure the viewers to download and watch the content by showcasing some of the famous characters played by their favourite actors.

Speaking about their marketing and media mix, Hussein said, “We have a strategic approach for this campaign which is being promoted across various media mix that includes TV (broadcast), digital and social media. Further, to get the brand closer to the audience and make it a part of their day-to-day life, the campaign engages with viewers of metro cities (Mumbai, Delhi, Bangalore, Pune and other cities) through various touchpoints such as health and fitness centres, restaurants, corporate offices to residential buildings, recharge centres, ATM and multiplexes. We have a mix bag of channels from different genres i.e., music, movies, daily soaps, etc. We have also targeted cinema halls and played the brand campaign during Race 3 release.”

Hussein also mentioned that their target audience is everyone who loves watching movies across Indian languages.

“The key strategy of the campaign is to appeal to both urban and rural audiences alike with a messaging that is Indian and personal in nature,” added Hussein.