Breaking Point: Indian Air Force Academy will premiere on June 4 at 9 pm, to be telecast every Monday 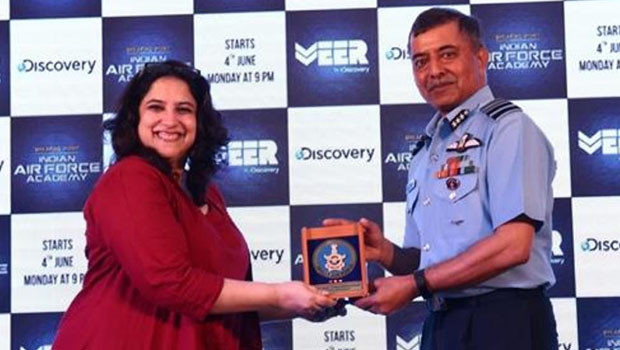 Discovery Channel is launching the third series under its franchise Breaking Point. The upcoming four-part series is based on the Air Force Academy. The new series gives a never-seen-before look into the training imparted at India’s premier Air Force training institution, Air Force Academy, located at Dundigul, Hyderabad, which is instrumental in shaping the future Air Warriors. The series will be available on both television and digital platforms of the network through Veer by Discovery, its YouTube channel also available on Jio TV.

Breaking Point: Indian Air Force Academy will premiere on June 4 at 9 pm, to be telecast every Monday.

The channel ended the series on Indian submariners earlier this year, which it claims to have delivered encouraging results – notching unduplicated reach of 1.7 crore (All India 2+ BARC India)  over the past two months (March 19-May 22) on Discovery channel and more than 59 lakh cumulative views on Veer by Discovery.

Generally, each episode is telecast once as main run, followed by four repeats spread out during the ongoing series. However, sometimes, there is a special telecast.

Asked if the earlier series was telecast from a binge watching point of view, Zulfia Waris, Vice-President and Head, Premium & Digital Networks, Discovery Communications India, said, “We don’t see a lot of binge watching happening in this genre. It is more associated to entertainment content like sitcoms or TV series. This is something very informative and attracts more passionate people who get inspired for this content.”

It has attracted advertisers, including Mahindra XUV 500 as a co-presenting sponsor, co-powered by Airtel 4G and Vivo Mobiles while Blue Star Air Conditioning and Fortune Vivo are on board as associate sponsors.

At the launch event of the show, Air Marshal Amit Tiwari VM, Commandant Air Force Academy was present along with other officials of the Air Force and Discovery Communications India.

Air Vice Marshal SP Dharkar AVSM, Assistant Chief of Air Staff (Training), said, “The Breaking Point series on Discovery channel has emerged as the go-to series for all defence enthusiasts across the country. We are delighted to work with Discovery as we aim to inspire the youth of India to look at the Air Force as a career opportunity and inspire our countrymen, offering a never-seen-before insight into the life of an Air Force officer; their journey from a cadet to a flying officer; the efforts they put in to flying the fighter jets and defend the nation when needed.”

“We are aiming to break the two crore unduplicated reach benchmark with Breaking Point: Indian Air Force Academy,” said Waris. “The journey from civilian to earning your wings is tough and nerve wracking. Each stage of this course has its own story, its own trials and tribulations and Discovery gives you an all-access pass to witness these transformations.”