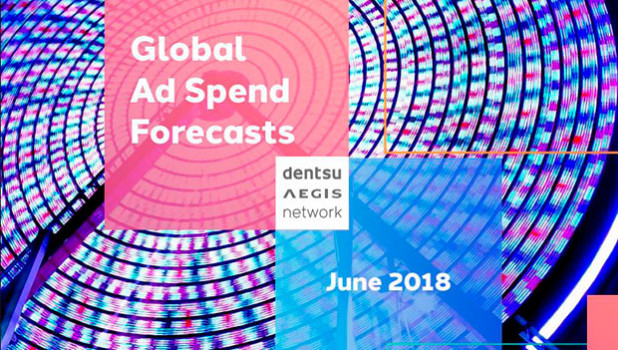 Dentsu Aegis Network has predicted that advertising spends in India will grow by 10.5% in 2018, reaching Rs 624 billion. The agency network has revised this growth number from its January 2018 prediction when it had released a forecast of 12.5% for India.

DAN released its biannual global forecasts, pointing to a more positive 2018 for Asia Pacific advertising expenditure than previously expected. Ad spend growth will rise from 4.0% in 2017 to hit 4.5% in 2018, higher than the 4.2% forecast in January 2018 and taking total investment to US$ 215.95 billion. Regional events such as the 2018 World Cup held in Russia, 2018 Winter Olympics South Korea, Asian Games in Indonesia and Australian federal election will play an important role in stimulating growth.

Geographically, Asia Pacific is a major growth region, contributing 41% of the global increase (US$ 613.5 billion). Comparatively, North America accounts for 32%, Western Europe accounts for 13% with Latin America at 8% and Eastern Europe 5%.

Nick Waters, CEO, Dentsu Aegis Network Asia Pacific, said, “The region as a whole displays a positive outlook with increasing growth rates. We are seeing upward revisions in most key markets, with India, the Philippines and Vietnam showing high rates of growth. Spend in China continues to grow at pace, though driven almost entirely by the ecommerce platforms, Alibaba, Tencent and Baidu. Digital remains the dominant growth area, with a quarter of Asia Pacific advertising spend expected to be delivered through mobile for the first time. Digital will be the leading form of advertising in half of the markets that we track in the region.”

Kartik Iyer, President, Media Brands and Amplifi, Dentsu Aegis Network India, said, “India’s ad spend is projected to grow at 10.5% as compared to the beginning of the year when the growth was expected to be over 11%. Digital continues its rapid growth (31.9%) with online video gaining in share. This has been driven largely by the availability of high-speed connectivity across the country, it is only set to grow faster. TV with a projected market share of 39.1% continues to lead the media share of pie with print at 29.3%. It wouldn’t be a surprise to see some forward thinking brands trying to use video instead of TV in a few test and learn cases.”

India: Indian advertising spend market is expected to grow in 2018 by 10.5% to reach Rs 624 billion. Though there had been a slow start in Q1-2018, the market was picking up from March-April, fuelled by a stable recovery post demonetisation/GST/RERA buoyed by the state elections in Meghalaya, Tripura, Nagaland and Karnataka in April. The India-South Africa match in January and budget announcement in February, led to continued expansion and growth of regional newspapers and television. Both social and online video will see growth for the next five years as India continues to evolve their internet, mobile, cloud audience.

China: China’s advertising market is predicted to grow 6.5% in 2018, up from the previous forecast of 5.4%, to reach RMB 630 billion – 16.2% of global ad investment. Growth will be driven by digital, which is forecast to command 60% of the advertising spend and increase by 14.8%. The online giants Baidu, Alibaba and Tencent (BAT) are projected to contribute around 80% of this growth, underlining their dominance of the marketplace. Mobile payments are also one to watch in the coming years as platforms such as WeChat or Alipay make cash obsolete in large parts of the country.

Australia: Australia’s advertising spend is forecast to show continued growth in 2018, increasing by 2.8% to reach AU$ 15.7 billion. The main driver of growth will be election-related advertising, which includes a boost in advertising by the governments involved as a means to promote the great things they have done during their time in power. In 2018 we expect more than 40% of growth to come from this sector and a further 40% to come from gambling, retail and finance advertising. Digital media is expected to increase by 6.1% in 2018, representing 48% share of the total media spend, which could be a result of brand safety issues where advertisers and media owners look to more autonomy and control of their content.

Mobile on the go

The mobile device is steadily becoming our primary point of access to all digital services and content. In 2018, 52.2% of all worldwide online traffic was generated through mobile phones, up from 50.3% in the previous year, according to Statista. People now spend an unprecedented amount of time on their smartphones – more than five hours a day, according to some estimates. This growth in usage is largely driven by the widespread availability of high-quality digital video. Mobile video consumption is exploding among all age groups and content categories. Nine in 10 social media users opt for mobile browsing, with mobile apps accounting for 70% of time spent on social media.Reflecting this, mobile is forecast to represent a quarter of global ad spend 25.2% this year exceeding the previous prediction of 24.8%. With mobile payments forecast to be more popular in the coming years, mobile is set to continue on a positive growth trajectory, a forecast 23.3% in 2018 and 18.8% in Worldwide digital media spend is forecast to increase by 12.6% in 2018, more than three times the rate of all media (3.9%), to reach US$230.6 billion — a US$25.7 billion incremental increase year-on-year. Online video (+24.6%) and social media (+21.6%) are particularly strong. Paid search continues to account for the largest share of digital (39%). As previously predicted, digital will overtake TV for the first time this year to account for 38.4% share of total ad spend vs. 35.5%. In the US, digital spend is forecast to overtake TV in 2019. Programmatic ad spend is expected to grow by 23.2% in 2018 and 19.1% in 2019 as the ability to consolidate programmatic buying strategies across formats and devices continues to be an opportunity for advertisers to reach the most valuable audiences at scale.