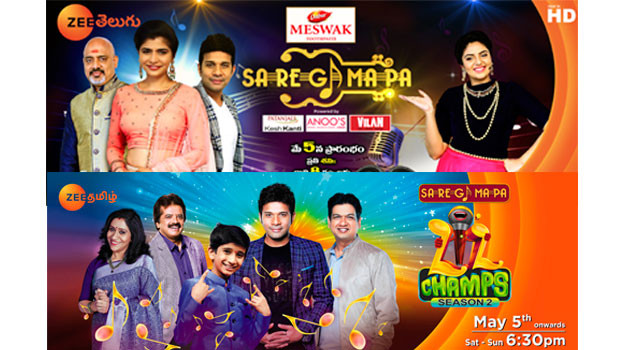 The Tamil and Telugu general entertainment channels (GEC) from ZEEL, Zee Tamil and Zee Telugu, are all set to launch three reality (talent hunt) shows for weekends, on May 5. At 8pm, Zee Telugu will telecast the 11th season of its singing reality show, Sa Re Ga Ma Pa, while at 9pm, it will be followed by Drama Juniors, a kids’ acting talent hunt.

On Zee Tamil, the second season of Sa Re Ga Ma Pa Li’l Champs will be telecast on weekends at 6.30pm. The show will feature performances by junior contestants from across Tamil Nadu, ranging from 5 to 14 years of age.

Sa Re Ga Ma Pa Li’l Champs Season 2 will bring together, for the second edition in a row, the panel of judges including vocalist Sujatha, playback singer Karthik, maestro Srinivas and singer-cum-music composer Vijay Prakash. The show will also feature a grand jury panel comprising renowned music gurus. Hosting Sa Re Ga Ma Pa Li’l Champs’ second season will be Archana Chandhoke. The second season of Sa Re Ga Ma Pa Li’l Champs will witness 40 young and talented children, shortlisted from thousands of aspiring singers. These contestants have been shortlisted through auditions conducted in Trichy, Madurai, Coimbatore, Chennai, Bangalore and Kochi. The final 20 contestants who will further compete for the title of the ultimate ‘winner’ will be chosen through a round of blind auditions wherein the judges will be blindfolded to promote fairness.

Sa Re Ga Ma Pa on Zee Telugu will have a panel of judges that includes lyricist Ramajogayya Sastry, playback singer Karthik, and playback singer Chinmayi, who is the voice of Zee Telugu’s brand ambassador, Samantha. A total of 16 contestants will contest against each other to become the title winner. These contestants will have the privilege of being mentored by the 16 jury members, who will play a vital role is shaping up each of them as thorough singers throughout the season. Sreemukhi will host the new season of the show.

Drama Juniors will have 22 contestants in the third season who were handpicked from auditions that took place across Andhra Pradesh and Telangana. Hosted by Pradeep Machiraju, Drama Juniors will continue to feature judges Anasuya Bharadwaj, Ali and Ohmkar, keeping the viewers glued to their television sets every weekend.