DB Corp publishes many newspapers, including Dainik Bhaskar, Divya Bhaskar, Divya Marathi and Saurashtra Samachar. The company has announced its audited financial results for the quarter and year ended March 31, 2018.

Sudhir Agarwal, Managing Director, DB Corp, said, ŌĆ£Our performance in the fourth quarter has reflected a culmination of all efforts we have been under taking over the last one year in implementing editorial and circulation expansion strategies. As evident, both have played out their complementary roles and we have reported significant circulation-led growth. Our focus markets remains the same in Gujarat, Bihar and Rajasthan and we are working hard to further increase our circulation in markets we already enjoy a strong dominance, including MP, CG, Haryana and Chandigarh. A key aspect of our circulation strategies have been the strong reader engagement initiatives that helped in expanding our markets and attracting new readers. Through these efforts, we have been successful in also attracting the right profile of audiences in NCCS A and B categories also benefiting our advertisers. Our stringent business processes are ensuring that all our resources are prudently utilised, and through capabilities in technology, we have ensured that every teamŌĆÖs efficiency and productivity is at their best. The non-print businesses are also well synergised and strongly complement the overall package to advertisers and brands. At a broader level, all fundamental business growth drivers are in place which positions us well to capitalise on emerging industry opportunities. The positive outlook on India reflected by global institutions is providing a strong impetus to the positive sentiment on-ground that signals a better new fiscal ahead.ŌĆØ 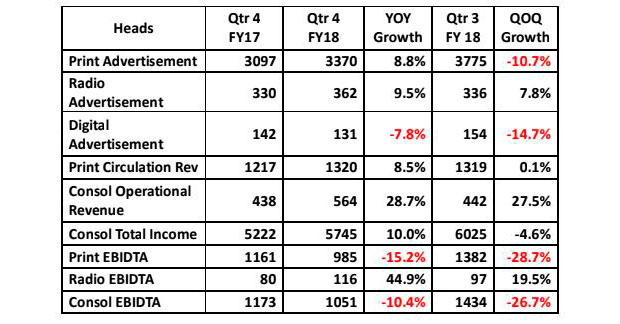 Newspaper delivery to resume in Mumbai from April 1

Coronavirus outbreak: Newspaper delivery affected in Delhi-NCR, other parts of the country; no newspaper in Mumbai, Goa till March 25