In the second set of campaigns, BestMediaInfo shows how differently brands have tried to touch upon different aspects of motherhood 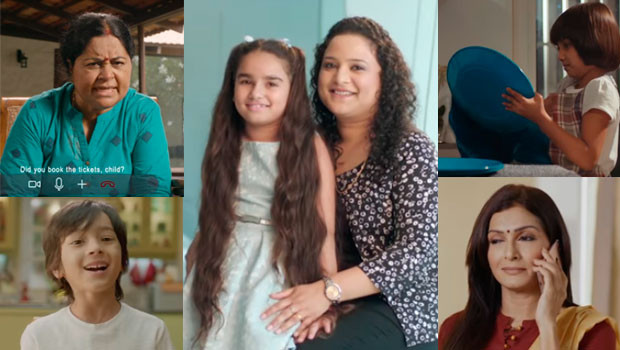 Advertising campaigns are a part and parcel of every brand’s life. However, it is occasions like Mother’s Day that allow the brands to talk about issues that might or might not be related to their products. The campaigns help the brands in addressing and grabbing the attention of the female consumers.

On May 11, BestMediaInfo had reported a string of campaigns that were conceptualised, designed and executed especially for Mother's Day. In the second set of campaigns, different brands have tried to touch upon different aspects of motherhood.

Ola’s Mother’s Day campaign seeks to break stereotypes of mothers being uncomfortable with technology through humorous videos. The cab aggregator, through some quirky videos, takes a dig at children who assume that moms are not tech-savvy. #MomsOnTheMove demonstrates how moms today can, in fact, easily use apps such as Ola, and are comfortable using gadgets and devices, contrary to the myth we may be led to believe.

#MomsOnTheMove marks a new age of evolution in branded campaigns where social impact is seen as a central component of business results as opposed to an afterthought.

Goodknight Activ+ celebrated Mother’s Day through a video in which the brand has decided to show gratitude to every mom who is unique in her own way with the help of emojis, or Emomjis as Goodknight calls it. Conceptualised by JWT, the video showcases small nuances that are special about every mom in their kid’s eyes.

The video begins with a group of kids facing the camera. A prompter asks one of the boys to act like his mother – Accha mummy ka acting kar ke dikhao. Mimicking his mom he says, “Chhota Bheem itna strong kaise malum hai? Kyunki who roz karela khaata hai!” and then makes a face. The prompter moves from one kid to the next as they adorably enact their moms on camera. The video thus showcases different types of moms – Superchef mom, Mentor mom, BFF mom and Boss mom.

This Mother’s Day, the Godrej Group released a heart-warming video on what it takes  #toraiseachild! Conceptualised by Creative Land Asia, the film is an ode to all the mothers that don multiple hats throughout their professional and personal life and yet continue to play their role as a mother with such ease.

The film captures mothers that work at Godrej along with their children and takes us through a journey of what makes raising a child an even better and fulfilling journey for them. It takes a workplace to be inclusive not just with reference to their employees but also the ones that are dear to them. The film takes us through a number of workplace policies that should be part of this journey of motherhood to ensure our future is raised well and we have a brighter tomorrow.

Godrej Security Solutions has struck an emotional chord with mothers with its new digital video #MomsJustKnow. The one-minute film very aptly portrays a mother’s ability to always know when and how to be by her child’s side, no matter how near or far she is from her little one.

Doffing its hat to working mothers on Mother’s Day, the video subtly highlights the deftness with which mothers balance their professional and personal responsibilities.

Conceptualised by CreativeLand Asia, the video beautifully portrays a mother and a child’s relationship based on trust, care and sense of security. The video begins with a child going about her daily chores such as finishing up her homework, eating her dinner before she heads towards her room to sleep. However, as she approaches her bedtime, she feels lonely and frightened. Miles away, her mother who is on a business trip senses the anxiety as she has been keeping a watch on her daughter through the Godrej Eve application on her phone connected to the camera in her daughter’s room. She sings a lullaby and the daughter who is at first surprised to hear her mother’s voice, calms down and falls asleep.

The video ends with a heart-touching message: ‘Mothers just know how to be around. And once in a while, we help.’

This campaign not only addresses the ability of a mother to always know when and how to be around her child but also showcases Godrej’s recently launched, India’s first Wi-Fi-enabled DIY home camera range – EVE (Easy Viewing Everywhere) that give the homeowners and residents the convenience and control to watch over their loved ones and engage with them through their smartphone from any part of the world.

PNB MetLife has launched a digital video campaign, ‘Shukriya Maa’, on the occasion of International Mother’s Day. It underscores a unique and unconventional message of changing mindsets as compared to changing oneself. The video is conceptualised by Jack In The Box.

PNB MetLife’s campaign has selected a common conversation between a mother and a daughter to narrate the philosophy of changing times and changing outlook. The campaign has been designed around the infamous “wear a jacket on the dress” conversation. The prowess of the campaign lies in the subversion of the message, as the mother is seen to urge the daughter to take off the jacket. The symbolic gesture of the daughter taking off the jacket highlights the changing times and with it the changing outlook.

And change begins at home. Mothers who have been our mentors, protectors and friends and have helped shaped our lives and values. They have been protective and thus they would ask the daughters to dress conventionally. This campaign has successfully portrayed the modern working mother, who does not believe in dominating. She allows her daughter the freedom to make her independent choices because she believes in individuality. The campaign highlights the contrast by pitting a modern mother against a daughter in the same conversation, but alas, the roles have been reversed.

Motherhood transcends biological boundaries and motherly love is an emotion that goes beyond one person or relationship. From women who raise their siblings like their very own children to the friends who care for you like a mother.

Take the weight off yourself

Turtle Limited, a men’s lifestyle brand, has created a YouTube video to celebrate Mother’s Day that breaks through the clutter. The film very subtly pays tribute to motherhood by showing a man who readily took up the challenge of carrying an average weight of a baby in stage of pregnancy around his belly for nine days but surrenders after a week, confessing his discomfort while carrying.

The video has been unique as it delivers the value of motherhood through a hard-hitting technique. He was given an artificial belly weighing an average baby weight to carry with him until he completes his challenge. On day 1, the man could easily pull off the challenge and seemed relaxed and happy. But the protagonist could not sustain the weight on his body anymore and ultimately surrendered on day seven of the challenge period. In today’s digital age where people are more worried about the external pomp and show, Turtle aims to highlight the inner substance and emotion in a man’s life inspired by a mother’s journey.

The core idea behind creating this video is to portray the journey a woman carrying her child for nine months. This feeling is something that no one can fathom.

This Mother’s Day, Grofers reminded us how mothers add love to everything they make, which makes the dish and the love, priceless.

Through a compelling digital film #MomsMakeItPriceless, Grofers showcases the relationship between mothers and their children and how they bond over the great taste of food. The brand, as a part of its campaign, brings a simple yet profound thought that no matter what the dish is, a dash of her love makes it special in ways unsaid.

Kotak Silk is a programme designed for the banking and investment needs of women. At the heart of Kotak Silk is the belief that it is financial independence that can lead to real independence for women. Conceptualised by Tonic Worldwide, the Kotak Silk #NoOneLikeMom film celebrates the spirit of motherhood and showcases how mothers fulfil the desires of their children with the savings they have accumulated. The film also brings out the insight that mothers have always been wise savers and have therefore been ‘The Best Financial Managers of All Time’. The brand film captures the emotions and is beautifully tied up in the campaign #NoOneLikeMom.

Celebrating the spirit of International Mother’s Day, Mother Dairy today released a celebratory video to honour the spirit of unsung mothers. These inspiring women, who may not even be a part of the family, play a major role in nurturing the child be at home or outside. These ‘mother like figures’ are the pillars for every mother as they are the support system that enables the mother to carry out her multiple tasks with confidence and peace.

The video opens with a shot of a mother waking up her daughter. In the next shot, the grandmother is pampering the child to wake up and then coddling her with Mother Dairy cheese and parantha, making her a delightful breakfast as she prepares to leave for school. The mother and daughter leave home for their respective destinations to office and school. The little girl comes back from school and is greeted by the housekeeper at home where she gently listens to the little girl’s heart and offers her some Mother Dairy cheese slice to keep her in content. Later, while playing at home, the elder sister is seen helping the little one with homework and reminds her about the football class and make their way to the football ground. In the next shot, the little girl hurts herself during a practice session and is attended by her coach immediately, who further comforts and encourages her to take control of the situation. The final shot brings all the women together – mother, grandmother, housekeeper, sister and the coach cheering for the little girl when she hits a goal at the ground. The final frame also airs the voice-over saying, ‘because one mother cannot be everywhere, she needs many helping hands; on this Mother’ Day, we celebrate them all.’

Pepperfry has launched a digital campaign to celebrate Mother’s Day in collaboration with Girliyapa, the women-centric channel by TVF productions. A video-led campaign features a witty and quirky video to highlight how mothers make the house a home to subtly evoke a sense of gratitude for our most-loved matriarch. The central theme of the video campaign revolves around, “what it would be like if mothers did not behave like themselves but behaved like government employees”. The video focuses on the quintessential mother-daughter relationship in the form of a listicle unfolding various situations where the daughter needs her mother’s help. When the daughter is not able to find her dress, she is hungry, requesting her mom to cook a meal, not being prepared for a day out because she can’t find her shoe even though she has looked for it everywhere. While the role of the daughter will resonate well with every millennial, the conversations and activities navigate through a world of humour and sarcasm because the mother behaves like a government official. Throughout the video, one feels a hidden sense of relief to know that mothers don’t behave this way in real life. At the same time, it also emphasises the importance of mothers in our lives. How they create and maintain a beautiful home with complete harmony.