Amazon or Walmart: Who will Flipkart choose and why

Walmart had made an offer to buy a majority stake in Flipkart for US$ 10-12 billion. On the other hand, Amazon has offered to buy 60% stake. Media reports say it has offered Flipkart a breakup fee of $2 billion to discuss an offer. BestMediaInfo tries to understand the impact of Flipkart’s decision on the Indian e-commerce market 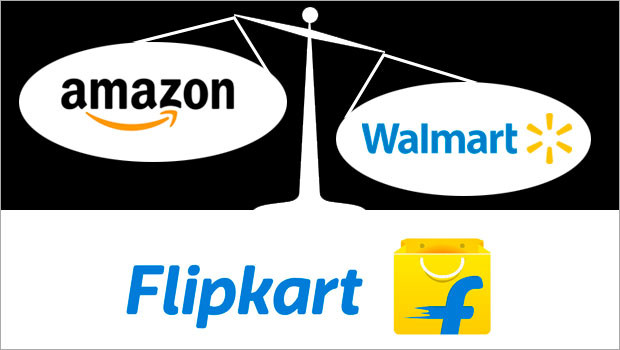 In what is going to be one of the biggest upheavals in the Indian e-commerce industry, a majority stake in Flipkart will soon be acquired either by Walmart or Amazon, according to market reports. Offline retail giant Walmart has been trying for quite some time to make this acquisition deal sail through and now, as per media reports, it is almost in the last stages of finalisation. Walmart had made an offer to buy a majority stake in Flipkart for US$ 10-12 billion.

On the other hand, Amazon has offered to buy a 60% stake. If the media reports are to be believed, it has offered Flipkart a break-up fee of $2 billion to convince it to discuss an offer.

Flipkart and Amazon have been at loggerheads in the India market with both trying to dominate the Indian e-commerce space. Flipkart had reportedly rejected Amazon’s offer for a 51-55% buyout about two years ago.

Morgan Stanley has estimated that the global e-commerce business would reach about US$ 200 billion in the next decade. As per Walmart’s website, it serves about 270 million consumers every week through stores in 28 countries and the e-commerce site. On the other hand, Amazon has about 310 million active consumers per quarter. Flipkart, too, boasts of about 100 million registered users.

BestMediaInfo tried to understand the impact of Flipkart’s decision on the Indian e-commerce market.

In case the Amazon offer is accepted by Flipkart, the Competition Commission of India (CCI) might be a hurdle since the two players together own close to 80% of the e-commerce segment in India. Other than this, the merchants who deal with the two e-commerce giants might also face trouble since they will lose negotiation power and will lose proper grievance redressal.

Looking at the positive side of the deal, if it happens, Akhil Almeida, Vice-President, Digital, Kantar IMRB, tried to analyse it for us at various levels. Mentioning that the situation is completely hypothetical right now and that all assumptions are speculative, Almeida pointed to one of the biggest gains for Flipkart, “It would put an end to a long and costly battle between these two players. Plus, it would potentially give Flipkart access to a lot of new technologies that Amazon brings to the table, especially in the field of artificial intelligence (AI). When it comes to shopping online, consumers will eventually move away from text-based input to voice. Amazon is a leader in this field with the ability to integrate a wide range of services from shopping, to entertainment, to commuting, and subscription services into their service offering. Today, you can ask Alexa to play music, order a cab, and make a shopping list. Tomorrow, you could be asking it to order a meal, pick up the laundry and much more. This will bring a whole new challenge for marketers and brands as they look to make their products and services relevant and surface them in the moment. No doubt such developments might take time to fructify but it seems to be where we’re headed.”

While the strength of technology is something that puts Amazon on the upper hand, when compared to either Walmart or Flipkart, it must be noted that Flipkart and Amazon have rubbed shoulders with each other in a wrong way in the Indian market. Also, Flipkart is the oldest e-commerce brand in India. It won’t be wrong to say that it actually started the category in India.

Almeida questions if the brand will live on if it joins forces with Amazon. He said, “Would Amazon want to retain two brands in India? Though it was not the first player to enter the market, Flipkart has practically built India’s e-commerce landscape and made it viable for a host of other players (including Amazon). As a result, Flipkart has tremendous brand equity among online shoppers. It would be interesting to see if Amazon would want to retain two brands in India – each with its own distinctive positioning or if they would eventually consolidate everything under a single brand.”

While nothing much may change for the consumers, the one thing that will change is the possibility of buying at the lowest possible price. Consumers have been the biggest beneficiary of competition between online marketplaces. One is likely to find any product at the lowest possible price online since both players were willing to cut margins in order to retain customers. The coming together of the two players might put an end to the days of heavy discounting we’ve seen over the last few years. We can expect to see a renewed focus on improving the buying experience and building in-house brands.”

There are other smaller e-commerce specialised players in India like Zivame, Hopscotch, Bigbasket (against Amazon Now), Ajio, firstcry, Snapdeal, Paytm, Shopclues and Voonik among others. But despite this, the Amazon-Flipkart combination (if it happens) will be a big disruptor. “If the deal happens, it might force the other players to either be bought out, or a few others who might be forced to shut,” said Almeida.

While this was about the Amazon-Flipkart deal and its likely impact on the Indian market, another media observer from a research firm, who did not want to be named, called Amazon’s offer to buy stake in Flipkart as a ‘defensive manoeuvre’. He explained, “If the Amazon story is true, then it is possibly a defensive manoeuvre in a certain sense. I don’t know if Amazon would have gone so far if it hadn’t been for Walmart, because in that sense whether they want to pay the price almost as much as they have already invested in India to build their existing size. Given that Walmart is interested, it makes sense for it to go for it. It is a long-term move by Walmart, while it is more a defensive move by Amazon.”

Commenting on Walmart’s position, he said, “Walmart clearly wants to protect the Indian market. It makes sense. It’s kind of edge for future category, future market. Amazon and Walmart are both at a place where it is possible to have an acquisition that they feel worthwhile.”

Multiple experts have confirmed that if Amazon gets it, Walmart will have to wait a little longer to enter the Indian market. They have the offline retail, which is not a serious operation in India and multiple retail investment is not a possibility right now. So, they don’t have that many moves ready for India, except that they enter through e-commerce. “But also, setting up their own thing right from scratch in the presence of the two giants will be very difficult and hence Walmart’s offer for Flipkart makes complete sense. So, yes, if Amazon is able to get this deal, it will keep Walmart out of the Indian market for some time. If Walmart gets it, then the Walmart versus Amazon will play its next fight on Indian soil,” said an expert.

Tags: Who will Flipkart choose and why
Advertisment
More from this section