Developed by Dentsu One, the ‘Love is Growing’ campaign celebrates how Activa is not just a two-wheeler but an emotion, love, which unites millions of Indians across age 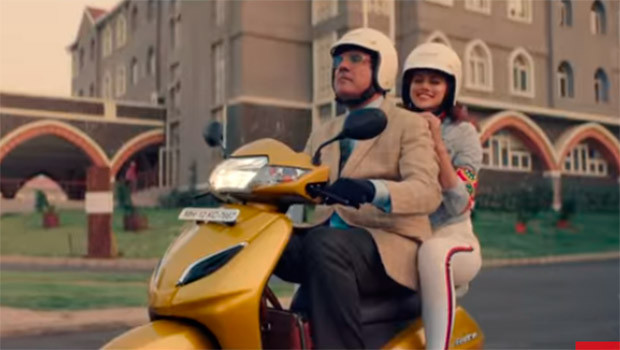 Honda Motorcycle and Scooter India Pvt. Ltd. has introduced a 360-degree ad campaign ‘Love is Growing’ for Activa 5G, highlighting all its features. Developed by Dentsu One, the TVC is now on air across all popular channels.

The campaign celebrates how Activa is not just a two-wheeler but an emotion, love, which unites millions of Indians across age.

Giving an extra fun punch and emotional connect to the TVC is the story of Taapsee Pannu, daughter of college professor (Boman Irani) with many a comic twists.

Honda’s ‘Love is Growing’ TVC starts in a college campus. Pannu enters riding the new Activa 5G with her father (Irani) as her pillion. A group of four youth stop to notice the scene. The first says ‘Ye to wahi hai yaar’ to which the second replies ‘lagti to bilkul alag hai yaar’ to which the third friend adds “Bright like sunshine”. The first impression is that students are infatuated with the pretty girl riding the scooter. But as the scooter draws nearer, it is realised the object of their fancy is the all new Activa 5G.

One of the friends has all eyes for the girl and says “Tu 5G Dekh, Mujhe to apna future dikh raha hai.” The strict professor father (Irani) hearing this asks the boy to come inside the building. A voiceover in the background introduces the scooter as ‘Agaya hai naya Activa 5G. Curiosity badegi, batein badhengi, aur pyaar toh badhega hi.’

When Pannu returns, she asks the boy what he was saying about the future. But once again, before he can reply, the professor returns. On the way back, Irani rides the Activa 5G. Meanwhile, new love is growing as Pannu looks back and smiles at the boy.

Yadvinder Singh Guleria, Senior Vice-President, Sales & Marketing, Honda Motorcycle and Scooter India Pvt. Ltd., said, “As the No. 1 selling two-wheeler of India, Activa is no longer just a mobility solution but a cherished part of life for more than 18 million Indian families and youth. Activa has transformed to meet the evolving needs of every generation over the years. The new fifth generation Activa 5G, while staying true to its legacy of trust, innovation, quality, reliability and convenience; looks and rides completely different giving young India all the more reason to fall in love with it. The new ‘Love is Growing’ campaign celebrates that not only is the Love for Activa is growing but love is growing in real life too.”

Titus Upputuru, National Creative Director, Dentsu One, said, “Activa is a household name in India. It has seen many generations. As we were briefed about the fifth generation model of this very popular brand, we thought let’s showcase how this love is growing. The film is a little chapter from this love story, which occurs in a University, between one of the students and the professor’s daughter. It was great working with Boman Irani. Taapsee adds a new flavour to the brand. We hope the film builds on the love that the brand already enjoys across the nation.”

Abhinav Kaushik, Senior Vice-President, Account Management, Dentsu One, said, “Activa has become an inseparable part of Indian families since its launch 17 years ago. So many things have changed during this time but the love and affection for Activa has only grown and multiplied over the years. With this growing love across multiple generations, it was the right time to launch Activa 5G with a quirky campaign where the brand becomes the harbinger or catalyst to get two people to fall in love with each other.”

Title of film: “Love is Growing”