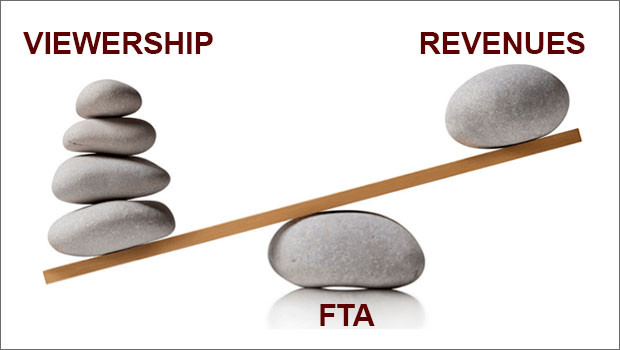 In the absence of rural viewership numbers, both broadcasters and advertisers were forced to focus on the urban audience. But as BARC started reporting rural numbers, the focus moved to the TV channels that rural India was watching as more than half the viewership was coming from rural and semi-urban segments.

The channels rural India has been glued to since the wider rollout of DD free dish are the free to air (FTA) channels of private broadcasters. These channels are sister channels of mainline GECs showing the old library content of main channels.

Today, these FTAs, mostly GECs, garner around 58% of the total viewership as per the BARC numbers (HSM 2+). This means the sister channels of DD free dish that telecast old content of mainline GECs are getting much more viewership, thanks to the cost-sensitive rural audience that DD free dish is getting channels without paying, unlike traditional DTH and LCOs.

Currently, the DD platform hosts around 80 channels, including Star India’s Star Utsav, Sony Pictures Networks’ Sony Pal, Zee Anmol and Rishtey from Viacom18 Media. It also broadcasts news channels such as Aaj Tak and News 24. The dish has a reach of little less than 25 million homes and is projected to reach 40 million in three years.

But the broadcasters haven't been successfully able to monetise the reach of FTA channels. They claim advertisers aren't paying enough for FTA. Despite getting more than half of their viewership through FTAs, the broadcasters get less than 20% of their total advertising revenue through the segment.

Advertisers say broadcasters aren't spending any money on the FTA content as they telecast the old mainline GEC content and the only investment is on carriage and operations. Also, the viewership on FTAs fluctuates a lot.

How are FTAs placed in advertisers’ media plan?

Explaining the importance of the genre, an FMCG major said, “FTA is a critical part of the channel mix when we layer the plan. There is obviously a reach and frequency calculation, but not much depends on it. It is basically used as a tool to reach tier 2 and tier 3 towns.”

While no one wanted to come on record on this, it was understood from an automobile major that they spend nearly 15-20% on FTAs, vis-a-vis the pay channels. Similarly, an FMCG major that has strong offerings for rural markets spends about 20-30% on FTAs. But an FMCG player that has comparatively high purchase point products spends about 15-18% on the FTA channels.

An advertiser explained, “For brands like Colgate, Dabur and even ITC Foods, a disproportionate amount of their products are catered into rural markets, the Rs 5 and Re 1 price point products work well there. While CPRP is comparable, their ER is very low. In rural and U+R basis, the CPRP comes out to be lower, but while using FTAs for urban only, there isn’t much benefit on the CPRP.”

When the numbers don’t govern the placement in the media plan, perception plays a vital role. But in the case of FTAs, perception is not counted since content creates perception and content is repetitive on FTAs.

Vineet Sodhani, CEO, Spatial Access, explained how these channels are evaluated. He said, “The two key parameters would be the channel performance in terms of viewership share and ratings and secondly the effective rates, both eventually translating into the CPRP. Currently, in the Hindi GEC space, approximately 52% of the viewership pie belongs to the FTA channels (in the Hindi speaking markets-HSM), which is a significant jump versus the last year where it was about 32%. If rural HSM is as critical as urban HSM, then FTA may be the way to go.”

In terms of ad rates, media planners suggest that a certain FTA channel would be getting close to 10% of the ad rates on the corresponding pay GECs. On a blanket rate, FTA GECs have ad rates of about Rs 5000-12000, depending on the amount of inventory bought by the advertiser.

Another FMCG advertiser said, “Overall, the CPRP on FTAs is 30-35% of the pay GECs. Even these channels are sold on primetime and non-primetime slots. It’s purely about cheap GRPs. It is a clear number game, and there’s nothing about perception in case of these channels.”

On the other hand, Sodhani said that despite the fact that there are exceptions, “Most of their rates are in the range of 40-70% of mainline GEC rates, depending on what one is buying.”

Rajiv Dubey, GM, Dabur India, had another point of view to suggest. He said, “FTA and Pay GEC costs cannot be compared. On pay GECs, the most expensive properties are the so called “impact shows” but these may or may not be most viewed ones. The impact shows like Sa Re Ga Ma, Bigg Boss get you exclusive viewership, have high cost of production and hence cost more. The value-GRP equation may not work if you compare these with FTAs.”

In the last few years, the channels in the FTA genre have grown exponentially. But the audience who consume these channels are different than the pay channel audience. Speaking about the FTA movie genre, Prathyusha Agarwal, CMO, ZEEL, opined, “FTA is a family cinema hall, so you will have to have positive movies. As long as the overall cinema cluster grows, it is a good thing for us. Pay cinema is a robust and strong genre and it will continue to be. Now we have a robust FTA cinema cluster too, which is comparable to the advertisers now.”

Ruchir Tiwari, Zee Cinema Cluster head, too echoed the sentiment, saying, “The advertiser would have got the confidence in the last one year as to how distinct and different these audience are and how much value they are adding to everyone. I think the under-indexing can be tackled with tactic. It is going to be an industry initiative.”

“I don't think it has reached a stage where it can become a big issue in terms of ad rates. From an industry perspective, FMCG already has a chunk of FTAs inventory,” added K Srinivas Rao, National Director, Buying, MediaCom. Dinesh Rathore, Chief Operating Officer, Madison said, “This is the first year of FTAs, if you actually calculate it. Till last year, the launches were happening. They have not seen their full maturity yet. The huge potential in FTA cannot be ignored, which actually pushed a pay channel to become an FTA. I’m sure there is enough revenue to remain an FTA.”

Are FTAs an undermonetised property for broadcasters?

Broadcasters for some time have been trying to seek increased rates for FTAs, claiming that advertisers are reaching out to a much large stream of audience. However, advertisers have been wary of ROI on FTAs for several reasons.

Unlike mainline channels, where the numbers don't fluctuate much, as in there is hardly any steep growth and fall in the viewership of channels on weekly basis other than the premiere of an event property, the fluctuation is high in FTA channels.

These variations are as much as 60-120 million in the numbers of almost every channel in consecutive weeks. This variation doesn't assure advertisers of a likely ROI on their investment in FTAs.

Even if the content on the FTA GECs is more uniform than movies, the reasons for this fluctuation in viewership numbers are varied. As Rao said, “The relationship complication between the MSOs and major broadcasters is also an important factor in this fluctuation.”

Other than this, unreliable supply of electricity and load shedding are important reasons for this variation. Nonetheless, this would make it difficult to include these channels in the media plan.

The fact that FTA has low content or almost no content cost deters advertising from shelling out more. Dubey said, “FTA GECs are under-indexed, made of repeat content, strongly skewed towards rural with scattered, inconsistent viewership. It has very low input cost for the broadcasters. FTAs would not be able to generate premium over Pay Channels because of nature of content (ie repeat), scattered viewership, low reliability on a time band and channel-it has to be bought as commodity without applying too much of science. The cost per GRPs is lesser than fresh content GECs but you have to spray a million spots in order to get some sure shot GRPs.”

Are FTAs hurting the ad growth of mainline GECs?

FTAs earn not more than 20% of the pay channels’ revenue. But is this 20% an increase in advertisers’ budgets?

A senior official from an FMCG major mentioned that no extra budgets are allocated for FTAs. He said, “The priority in the media plan is mainline GECs, FTA GECs, mainline movie channels and then FTA movie channels. The revenues have definitely shifted. For example, while earlier we used to spend 60 on GECs and 40 on movies, now, it is 40 on pay GECs, 20 on FTA GECs, 30 on pay movies and 10 on FTA movies.”

This means that while the FTAs are gradually increasing its revenues, the pay channels are losing these monies. FTAs are eating into the earnings of pay channels.

Sodhani said, “Advertisers’ inclination towards FTA channels can be evidently seen. The FTA channels have opened a whole new area of marketing opportunities for brands and advertising considering that rural India is no more a data dark area with BARC coverage being available now. Among categories that have grown on FTA channels, major FMCG categories ranging from soaps, shampoos, creams, aerated drinks, to tea and biscuits have seen a jump in their share of investment on these channels.”

Tiwari said that FTAs, by providing reach, were aiding the growth plans of broadcasters in rural India.

He's of the view that once viewers get glued to FTA, they will gradually start paying as well as the household income in rural India will also rise at the same time. “For a lot of these audiences, movie channels would be a new genre through FTA and in time, with increasing per capita income etc, they should get converted to pay channel and they should watch both since the content is different.”

He further explained, “Free has to be a precursor to pay. It is a trial package and that has to be how it works. That is the concept of free TV anywhere in the world. Unfortunately, it won't happen that easily here.”

Tags: FTAs High on viewership dry on revenues
Advertisment
More from this section