The new #TheFrootiLife campaign with spends of around Rs 100 crore will be seen across multiple media channels. It will also have significant presence in IPL and region-specific media activations 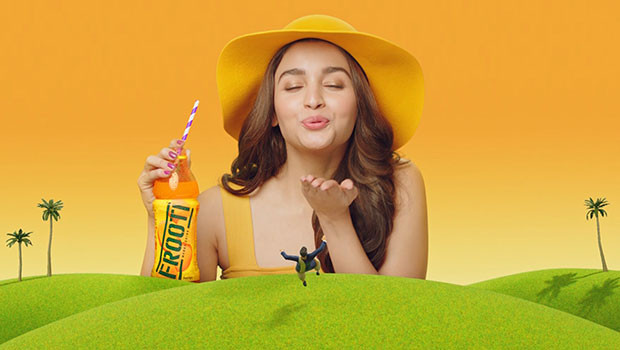 Beverage manufacturer Parle Agro has announced the launch of the new #TheFrootiLife campaign for Summer 2018, launching a hyper local marketing strategy with initiatives specifically targeted at different regions across the country.

The new strategy and campaign is crafted as Frooti prepares to achieve higher growth rates and capture market share this year, consolidating its position as a dominant player in the Fruit Flavoured Still Drink category.

The Rs1800-crore brand today, which holds significant market share in the Mango Drink category, aims to build better salience across India. The campaign will feature two separate commercials; one featuring Bollywood’s Alia Bhatt and the second with Tollywood superstar Allu Arjun. This is the first time that Frooti will be unveiling a region-specific commercial, specially catering to South India.

The new #TheFrootiLife campaign will see spends to the tune of Rs 100 crore and will be seen across multiple media channels across the country, including significant presence during the IPL and regional-specific media activations. The on-air commercials will be amplified through a 360-degree marketing plan, including significant investments in OOH, digital and on-ground activations and the launch of special editions packs for Chennai Super Kings in Tamil Nadu and Allu Arjun in Andhra Pradesh, Telangana, Karnataka and Kerala.

Nadia Chauhan, Joint Managing Director and CMO, Parle Agro, said, “This year's marketing strategy ensures higher focus on regional nuances to further build Frooti's equity and position in the country. With our national campaign with Alia and the southern campaign with Allu Arjun, both of which are simple yet inventive, we are looking forward to creating further impact in the category and growing our share. Over the last two years we have gained in market share by 8%, holding the number 2 position nationally at 29% market share in the mango drink category and the number one position in multiple states.”

The upcoming campaign for Frooti is created to build resonance of #TheFrootiLife and built on the past campaign’s narrative. Sagmeister & Walsh is the creative agency while the commercial is produced by Hornet Animations, New York, US, and directed by Yves Geleyn. The two television commercials are created with a mix of live action and stop motion animation, with Amit Trivedi creating the music for both spots.

Actor Alia Bhatt said, “I have always enjoyed the taste of Frooti and this being my first Frooti commercial makes it even more exciting. #TheFrootiLife is a fun-filled campaign that will connect with everyone.”

Allu Arjun said, "Frooti was the first soft drink I ever had in my childhood and never did I imagine that one day I would be one of its ambassadors and also have my picture on its packaging. For me, this is one of my personal milestones. I am glad to associate with Frooti and be a part of its exciting journey.”

Jessica Walsh, Partner, Sagmeister & Walsh said, “For Parle Agro, we have always strived to remain inventive and creative with our approach. With the new campaign, we aim to build on #TheFrootiLife while elaborating on the difference between a normal, mundane life and how fun things should be done in The Frooti Life.”

Talking about the media approach for the brand, Harish Sriyan, CEO, Omnicom Media Group, said, “We follow an aggressive marketing strategy that borders on the unconventional. With the new campaign, we plan to go all out with a 360-degree approach, helping us better connect with our consumers nationwide. Critical, disruptive and impactful investments have been made across media in order to stand out from the clutter and continue to build on an extremely impressive, existing brand aura.”

In 2015, Frooti introduced its consumers to #TheFrootiLife, a surreal world where magical things can happen. In 2018, with the third #TheFrootiLife campaign, the brand will further immerse its fans into #TheFrootiLife where the usual, mundane life is let go to live a fun-filled life where anything is possible.

The year will also see Frooti as the Official Pouring Partner for the Chennai Super Kings as they make their comeback in the IPL 2018. As part of the association, fans of the franchise in Tamil Nadu will be able to show their support for the team by purchasing limited edition CSK packs available in 160ml Tetra Pak, 300ml PET, 600ml PET and 2.25 Litre SKUs. Frooti will show its support for the team as they push to win in their return season with on-ground, digital, OOH and in-store activations.