Conceptualised by Leo Burnett Orchard, Dream11’s new campaign #DimaagSeDhoni featuring the cricketer himself draws parallels between Dhoni’s strategic planning abilities with qualities that are needed by every sports fan to play on the gaming platform 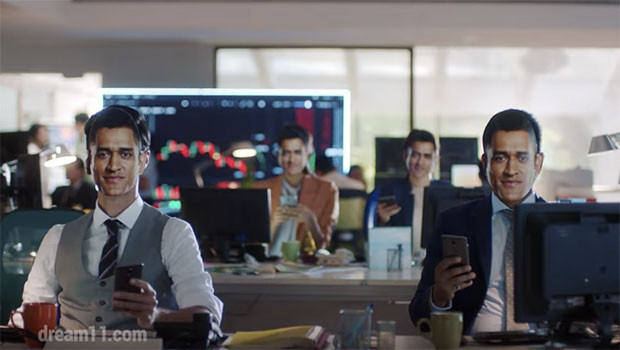 Dream11’s new advertising campaign draws parallels between MS Dhoni’s strategic planning abilities with qualities that are needed by every sports fan to play on Dream11. The #DimaagSeDhoni film shows how sports fans from diverse backgrounds playing on Dream11 use in-depth research, sports knowledge and skill just like MS Dhoni to choose their best team. The film employs a smart creative twist where users of Dream11 don a MS Dhoni mask to become the man himself. The concept is centred around passionate sports fans, who use their sports knowledge and research skills to be a champion on Dream11.

The advertising campaign is now live on TV across popular genres such as news, entertainment, lifestyle, sports, movie channels, etc. Fans can catch it live during the television broadcast of Vivo IPL 2018 on the Star TV network and Hotstar. It will also be featured on all social media channels of Dream11 – Facebook, Twitter, YouTube, Instagram – and will be further amplified during the much-awaited 11th IPL season.

Being a cerebral game, playing on Dream11 requires a deep understanding of the sport and its players, and accordingly, users need to apply strategy through a data-driven approach to recruit their Dream Team. With its new marketing campaign, Dream11 aims to popularise fantasy sports and strengthen awareness among existing and potential users.

Harsh Jain, CEO and Co-founder, Dream11, said, “We’re thrilled to launch our latest advertising campaign featuring MS Dhoni, as we move closer to the start of the 11th season of IPL. MS Dhoni resonates perfectly with the skill set and aptitude needed by sports fans to play on Dream11. We believe this campaign will play a pivotal role in engaging our existing users and attracting new users into the fantasy sports ecosystem, thereby contributing to the growth of the industry.”

Vikrant Mudaliar, Chief Marketing Officer, Dream11, said, “Over the last decade, Dhoni has been one of the most popular youth icons known for his strategic decision-making, consistent performance and perseverance. His personality perfectly complements the skill set required while playing on Dream11. We are confident that our #DimaagSeDhoni advertising campaign, which also features Dream11's new visual identity, will resonate with all sports lovers and help them discover Dream11 as the best tool to engage with their favourite sport.”

On the conceptualisation and execution of the advertising campaign, Mahuya Chaturvedi, COO, Leo Burnett Orchard, said, “The idea of Dimaag Se Dhoni communicates the essence of the brand Dream11 and justifies its role as a campaign from the brand. It establishes simply and effectively the brand differentiator of it being a 'skilled mind’s' game. As the brand develops it will grow as a tribe, a community of sports enthusiasts who understand sports and encourage sports lovers to know deeply about every sport.”