Starting April 18, Wild Frank Mamba will be telecast every Wednesday at 9:00 pm. The herpetologist Frank Cuesta returns to the channel, willing to risk his life and face the "kiss of death" 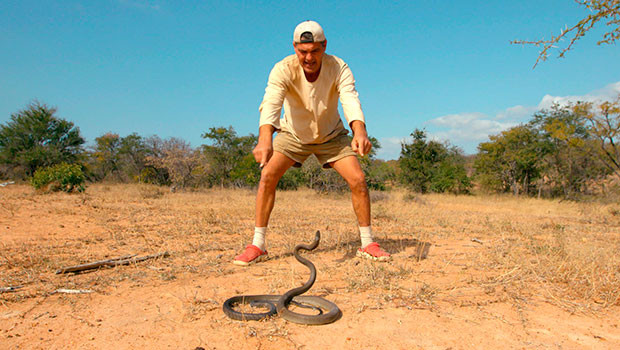 Discovery Channel has announced the launch of Wild Frank-Black Mamba with Spanish TV presenter, tennis coach, adventurer and wildlife expert Frank Cuesta who returns to the African continent this season. Starting April 18, Wild Frank Mamba will be telecast every Wednesday at 9:00 pm.

Zulfia Waris, Vice-President and Head, Premium and Digital Networks, Discovery Communications India, said, “Our strategy of establishing Discovery channel as the home of mavericks with focus on domains like auto, wildlife, adventure, military, science and technology, et al, has paid us huge dividends. Wild Frank has a huge following among male millennials, especially wildlife enthusiasts, and we are confident that his adventure in search of planet’s most lethal snake will keep the audiences engaged.”

Cuesta has traveled to territories as diverse as Brazil, Africa, India, Mexico, Nepal, Thailand, Australia and California with the objective of discovering their wildlife; and in the process, has exposed himself to situations of great danger. The herpetologist returns to Discovery channel willing to risk his life and face the "kiss of death". This is how the deadly bite of the Black Mamba is known in Africa, the deadliest snake on the planet and most feared by the inhabitants of that continent, who are aware of the consequences of the bite of this species whose attacks have increased considerably in the last few years.

On his journey through the grassland of Southern Africa, Cuesta and his team will face multiple challenges, including a fight for survival between a rhinoceros defending his space and a male lion. The adventure does not end until Cuesta achieves his goal and comes face to face with the black mamba. What will happen? Will he suffer the attack of the "ninja" of the Black Mamba or will he manage to dominate it?

Black Mamba is also the name of a group of 26 South African women who, uniformed in camouflage attire, dedicate themselves to protect poachers from animals that inhabit a 400-km radius in the middle of the African grassland. They are disarmed and patrol their territory to defend the rhinos and other wild animals that are the favorite target of poachers.

During his search for the snake, Frank will accompany these women who every day dismantle traps and fight to preserve wild fauna by exercising an educating role: they are experts in wildlife and environmental education and go through schools to teach children to respect and protect nature and animal life. The Black Mamba have been awarded by the United Nations Environmental Programme.